During the year, nearly 2 trillion yuan of new funds were added to the public offering and disappeared for more than two months 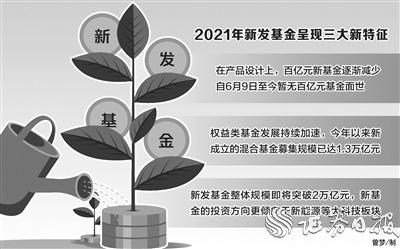 In the context of market style switching and the continued volatility of the stock market, the newly issued funds in 2021 are showing three new characteristics: First, in product design, the number of new funds with 10 billion yuan is gradually reduced. During the year, 19 new funds with 10 billion yuan Most of the establishment time was in the first quarter of this year. Since June 9th, no tens of billions of funds have been launched. Second, the development of equity funds continues to accelerate, and hybrid funds are still the main product of fund companies. The scale of newly established hybrid funds raised this year It has reached 1.3 trillion yuan; third, the overall scale of new funds is about to exceed 2 trillion yuan, and the investment direction of new funds is more inclined to large technology sectors such as new energy.

According to statistics from WinD Information, as of August 13 this year, a total of 1081 funds have been established in the public offering market, raising a total of 1.97 trillion yuan, which is about to exceed 2 trillion yuan. The number of newly established funds and the scale of fundraising have increased by 25% year-on-year. ,9%.

In addition, other types of funds such as QDII, REITs funds, and alternative investment funds have also established new funds, while currency funds have not been established.

From the perspective of the average share of funds raised, since the beginning of this year, the average raised scale of all publicly offered new funds has been 1.82 billion yuan, a drop of 260 million yuan from the same period last year.

But overall, since the beginning of this year, the total scale of public funds raised has increased compared with the same period in 2020. Among them, the scale of hybrid funds raised 44% year-on-year, occupying the main market share of the new fund market.

"Disappeared" for more than two months

In the context of the decline in the average fundraising scale, the number of new funds with a scale of over 10 billion newly established during the year is also decreasing.

Since the establishment of Penghua Yongyi's 3-month fixed-opening fund on June 9, the entire market has not established a tens of billions of public offering fund products for more than 2 months.

Overall calculations show that 19 "Big Mac" funds with a value of 10 billion yuan have been established since the beginning of this year, a decrease of 4 from the same period last year.

A public funder told reporters: "The reason for the decrease in new funds in the tens of billions of dollars is related to the changes in fund company product design. At present, large fund companies that have the ability to raise tens of billions of funds are very cautious in setting the product scale. It is not easy to issue new funds that are too large, which has increased the publicity of high-quality old funds to a certain extent."

"For small and medium-sized fund companies, star fund managers who have grown up in the past few years will not have a large scale of issuing new products." The above-mentioned industry insiders told reporters.

From the perspective of fund companies, the management companies of the aforementioned 19 tens of billions of funds are still dominated by large public offering funds. Among them, China Guangfa Fund established four tens of billions of funds in January, which ranks among the forefront of the industry. E Fund has established 3 funds, and Boshi Fund and Penghua Fund have respectively established 2 new funds of RMB 10 billion in the first half of the year.

Keep an eye on new energy and other major technologies

Xinfa Fund is continuing to "transfusion" into the A-share market.

"Securities Daily" reporter statistics found that among the newly established funds, equity funds (stock funds and hybrid funds) accounted for as much as 80%, and the investment direction was concentrated in new energy, high-end manufacturing, carbon neutral and other major technology categories. Plate.

In addition, the reporter combed the statistics and found that there were at least 95 new funds ready for launch in August (A/C shares are calculated separately), and the total number of new funds currently being issued and pending is nearly 400.

It is expected that more than 10 new energy industry theme funds will be launched one after another in the future, which is expected to bring targeted incremental funds to the corresponding sectors.

In this regard, Ding Luming, director of the major asset allocation and fund research team of China Securities, said: “The new funds currently being issued and pending may bring more than 330 billion yuan in incremental funds. According to the naming of the new fund and the investment theme From the point of view of the delineation and the multiple prospective fund managers, large technology sectors including new energy, high-end manufacturing, carbon neutrality, etc. are still important directions for subsequent new fund focus."

An industry veteran told a reporter from the Securities Daily: “The number and scale of new fund issuances on the current hot track have increased significantly, especially new energy and entrepreneurial ETFs continue to sell well. We believe that in the near future there are fund investors who will invest in traditional industries. The phenomenon of fund redemption and purchase of new funds on popular tracks will further aggravate the differentiation of the industry." (Securities Daily)