Video.. Behind the scenes of the latest Emirates Airline advertisement showing a stewardess at the top of the Burj Khalifa

Emirates has been known for its bold advertisements and innovative ideas, but its latest commercial has surpassed all of the above, in which a fully dressed female flight attendant stands firmly and confidently atop the Burj Khalifa at 828 meters above the ground, joining the few thousand 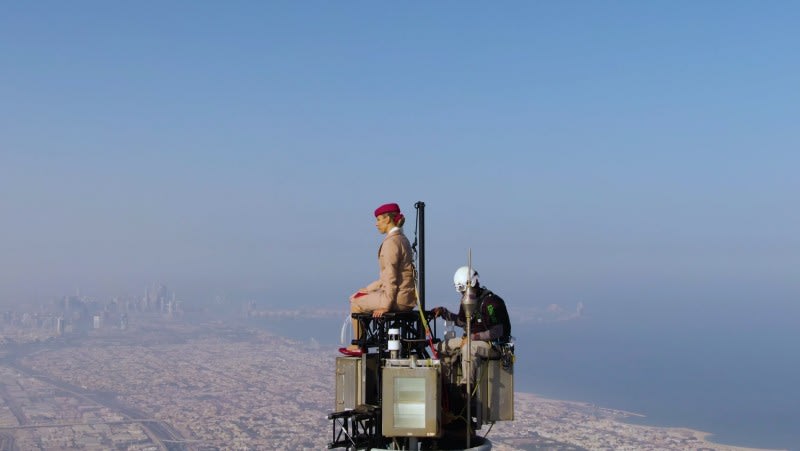 Video.. Behind the scenes of the latest Emirates Airline advertisement showing a stewardess at the top of the Burj Khalifa

Emirates has been known for its bold advertisements and innovative ideas, but its latest commercial has outdone all that, with a fully-dressed female flight attendant standing firmly and confidently on top of the Burj Khalifa, 828 meters above the ground, joining a handful of individuals who have had the chance to win. With the distinction of standing on top of the tallest building in the world, including international superstar Tom Cruise and His Highness Sheikh Hamdan bin Mohammed bin Rashid Al Maktoum, Crown Prince of Dubai.

The 30-second ad opens with a close-up of the Emirates flight attendant flipping over message boards in a nod to the famous scene in the 2003 song "Love Actually." As the camera moves away and the scene widens, the viewer soon discovers that the Emirates flight attendant, in her red hat and distinctive uniform, is actually standing at the top of the Burj Khalifa by Emaar, with a panoramic view of the Dubai skyline. The public can watch what happened behind the scenes by clicking here, or on the Emirates channel on YouTube and across the airline's other social media channels.

Sir Tim Clark, President of Emirates Airline, said: “We always work to exceed expectations every day with our innovative services, best-in-class products, and in our advertising. The confidence and calmness of our cabin crew, as reflected in the advertisement, is an expression of what he enjoys. Our front-line personnel excel in serving our passengers and ensuring their safety. We are proud to be among the privileged few that Emaar has allowed to photograph at the top of the Burj Khalifa. We are even more proud to showcase our beautiful city, Dubai."

Behind the scenes filming the latest advertisement for Emirates Airlines on top of the Burj Khalifa # Emirates_Today pic.twitter.com/q0INeMjIZK

The ad was shot without a background green screen or any special effects, and was preceded by careful planning, training, testing, and strict security protocol.

The heroine stood on top of the building at a height of 828 meters, and on an area of ​​​​its circumference of only 1.2 meters, to accomplish the task.

Emirates had invited the female flight attendants to run for the championship in this advertisement, and although there were some enthusiastic and capable female candidates, Emirates preferred the option of using a professional skydiving expert to ensure the highest levels of safety and security.

Safety remained the main priority throughout the preparations and filming of the ad.

A special platform was built with a pillar attached to the top of the mast for the heroine to stand on.

It was attached to the shaft, as well as two other points directly to the top, with a belt hidden under the Emirates uniform.

Filming began at sunrise, and the team members, including an advertising star, had earlier climbed from the 160th floor of the Burj Khalifa, taking an hour and 15 minutes to reach the top.

They had to climb several levels and internal stairs to reach the top.

The team at the top spent about 5 hours with the daring girl, who was wearing a seat belt under an Emirates uniform, with added safety thanks to the special platform installed directly on the top.

One drone (a drone) was used in continuous footage to film the entire sequence.

One of the most famous have been filmed from above, the bold Emirates commercial, shot 828 meters above the ground, was designed and directed by the Emirates brand team with the help of Dubai-based Prime Productions AMG.

The ad will be adapted to different markets across the Emirates network, with relevant messages included, as the first UK TV campaign will be launched.