Will the prices of pork, vegetables, and grain rise after the flood? Response came

Chinanews client, Beijing, August 2 (Reporter Xie Yiguan) Recently, a rare and continuous heavy rain raided Henan and other places. Some farms were irrigated, some greenhouses were destroyed, and some farmland was flooded. How about the agricultural disaster? Will it affect "vegetable baskets" and "grain bags" and cause prices to rise? Pork market prices are still relatively stable   On July 2 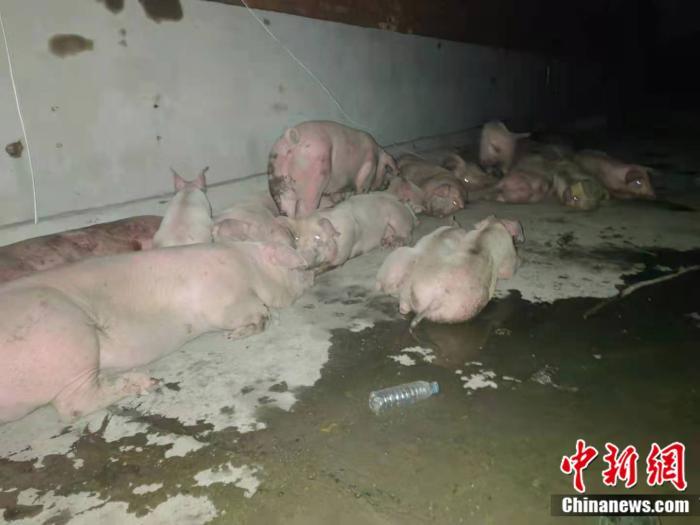 Chinanews client, Beijing, August 2 (Reporter Xie Yiguan) Recently, a rare and continuous heavy rain raided Henan and other places. Some farms were irrigated, some greenhouses were destroyed, and some farmland was flooded. How about the agricultural disaster?

Will it affect "vegetable baskets" and "grain bags" and cause prices to rise?

On July 22, Lao Yang, a worker at a pig farm in Jicheng Village, Weihui City, Xinxiang City, Henan Province, watched the field in the distance turn into a lake, and the "lake water" flooded into the pig farm.

"Boss, we missed, we have to withdraw." Lao Yang drove the pigs into the yard of the resettlement site. More than 1,000 pigs were lost, half of them were lost, and all the piglets before the full moon died; 20 tons of soybean meal, 10 tons of corn, all Soaked in water, the loss exceeded one million yuan.

Data map: The pig that was transferred out.

According to the dispatch of the Ministry of Agriculture and Rural Affairs, as of July 29, there were 15,000 farms in the country affected by the disaster, 4.276 million square meters collapsed and damaged pens, 248,000 dead pigs, 45,000 large livestock and sheep (only), poultry 6.446 million birds, a direct economic loss of 2.25 billion yuan.

Faced with this set of data, some people have a question: Will this disaster have an impact on pork prices across the country?

According to the official website of the Department of Agriculture and Rural Affairs of Henan Province, as a major pig breeding province and a major foreign transfer province, Henan’s annual pig breeding accounts for about 1/10 of the country. In the first quarter of 2021, Henan Province has 40.04 million pigs and can breed sows. There were 4.08 million heads and 15.7 million live pigs were slaughtered, ranking first in the country.

However, "this flood disaster is mainly concentrated in Xinxiang and Hebi, and the amount of breeding is not large, so it will not have much impact on Henan pig production or even the national pig price." Sozhu.com chief analyst Feng Yonghui told a reporter from Chinanews.com.

According to Feng Yonghui, the pig production capacity in Henan Province is dominated by the central and southern regions, and the production capacity has not been restored after suffering from African swine fever in the northern region, so Anyang, Xinxiang and Jiaozuo now have a small amount of pig farming.

"From a national perspective, the impact of floods on the national livestock production is limited. The deaths of live pigs are 248,000, which is a small proportion compared with the 439 million live pigs in the country at the end of June." said Yang Zhenhai, director of the Animal Husbandry and Veterinary Bureau of the Ministry of Agriculture and Rural Affairs. Recently, the national livestock and poultry breeding and listing on the market have generally remained normal, and the pork market price has been relatively stable.

Vegetable prices have fallen after a short-term rise

In addition to being a major animal husbandry province, Henan Province is also one of the main vegetable producing areas in the north.

According to the Henan Provincial Department of Agriculture and Rural Affairs, from July 17 to 21, most areas of Henan Province were hit by heavy rains, which had a weak impact on vegetable production in Zhengzhou, Xinxiang, Zhoukou, Hebi, Jiaozuo, etc., especially on the Jialu River and Weihe River. The flooding area and some low-lying land parcels are seriously affected.

Sekishui vegetable fields are in danger of reduced yield or even no harvest. Some greenhouses have been damaged or even collapsed, and some vegetable seedling bases have been flooded in seedling raising.

Data map: On July 22, a flooded greenhouse near Yucao Village in the west of Anyang City.

Under the flood disaster, vegetable prices have risen in some places.

The Zhengzhou Municipal Bureau of Commerce monitored that from July 19 to July 25, the average comprehensive wholesale price of vegetables in Zhengzhou was 3.96 yuan/kg, up 44% from the previous week.

"Severe floods occurred in many parts of the province, and some production areas were affected by the disaster, and supply was cut off. It was necessary to purchase from distant production areas, and transportation costs increased, resulting in a significant increase in vegetable prices." Zhengzhou Municipal Bureau of Commerce explained.

"From the perspective of key areas, the short-term accumulation of water in the fields in the disaster areas such as Henan has little effect on vegetable production. There has been no continuous large-scale out of stock. Vegetable prices have fallen after a short-term rise." Tang, Director of the Department of Market and Information Technology, Ministry of Agriculture and Rural Affairs Ke said.

"Grain bags" can be stabilized

It was the corn growing season. On July 21st, Zheng Jie (a pseudonym) looked at the water on the ground, worried about the crops in the field, "If the rain gets bigger and bigger, will the corn drown in large areas?"

Although I am in southern Henan, heavy rainfall has also spread here.

After the water receded, Zheng Jie anxiously went to check the fields, "Some of the corn in the low-lying areas drowned, and the condition of other homes is not very good, and some fields have fallen down."

According to the dispatch of the Ministry of Agriculture and Rural Affairs, as of July 29, 14.5 million mu of crops were affected in Henan Province, 9.4 million mu were damaged, and 5.5 million mu had no harvest.

Data show that in 2019, Henan Province's corn production accounted for about 9% of the country's total.

Will the severe damage to corn in Henan affect the supply and price of corn across the country?

Tang Ke believes that after the heavy rain disaster in Henan and other places, the market is worried about the impact of corn production and supply. In some parts of North China, prices have rebounded slightly in the short term. The purchase price has risen by 2-3 cents per catty, but it has not driven the increase in national corn prices. .

From the perspective of the international market, there has been no significant fluctuations recently.

"In general, the impact of the heavy rains and floods in Henan on the grain market is partial and short-term, and the overall impact on my country's grain production and supply is relatively limited." Tang Ke said. (Finish)