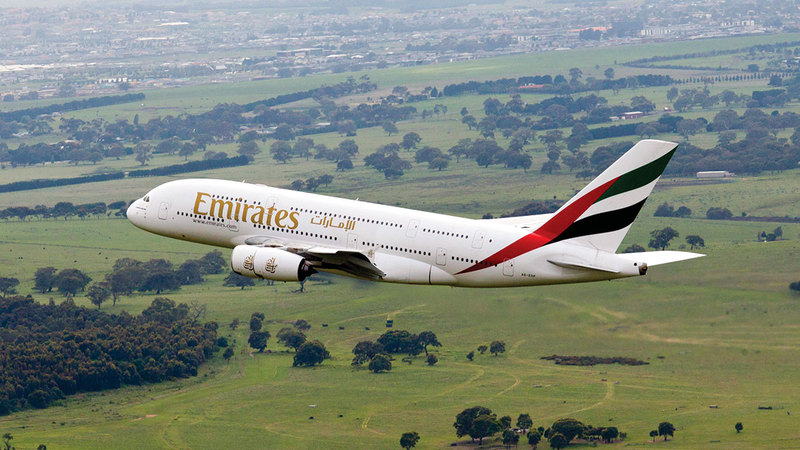 With the application of air travel protocols, it facilitates the travel of citizens and residents of the country

“Emirates Airlines” recovered about 60% of the number of flights, 90% of its network of destinations, compared to levels before the “Covid-19” pandemic, while “Fly Dubai” resumed its services to 50 countries in Africa, Central Asia, Europe, the Indian subcontinent and the region. Middle east.

In detail, data issued by Emirates Airlines and Fly Dubai showed a continuous increase in the number of passenger destinations within the network of the two carriers around the world, with the application of air travel protocols, which facilitate the travel of UAE citizens, residents and tourists, while maintaining health and safety. Visitors and communities, according to the data, the total number of destinations within the two networks of the two companies is currently 219 destinations, including 124 destinations for “Emirates Airlines” and 95 for “Fly Dubai”.

Emirates Airlines confirmed that it had recovered about 60% of the number of flights, and operated additional flights to some destinations, expecting a growth in demand for Dubai in the last quarter of the year, in conjunction with the "Expo 2020 Dubai".

The company stated that it is now operating in 124 passenger destinations (compared to 143 destinations before the pandemic), and it also operates A380 aircraft to 18 cities with 129 weekly flights on 30 aircraft.

During July 2021, Emirates Airlines resumed its flights to: Nice, Mexico City, Phuket, Lyon, Mauritius, and Malta, in addition to its new service to Miami, at a rate of four flights per week, which will connect its network in the United States to 12 destinations and more than 70 weekly trip.

Emirates Airlines confirmed that it worked to restore a broader connection through its partners in the common code, allowing its customers to access and connect from Emirates Airlines points to more than 500 other cities, across the Americas, Africa, Europe and Asia.

In addition, the total number of destinations within the "Fly Dubai" network reached more than 95 destinations in 50 countries within its global network, and "Fly Dubai" announced the strengthening of its network of destinations in the world, by operating flights from the Egyptian "Sohag International Airport", as of From July 25, in addition to the Austrian “Salzburg International Airport” service from July 15, it also announced the resumption of its operations to “Naples Airport, Italy” from July 31, and “Fly Dubai” will start its flights to the Turkish capital Ankara from July 29 with two flights. Weekly.

flydubai confirmed that it will become the first airline to operate to Hargeisa from Dubai, as it continues to open unserved markets and expand its network in Africa, and the airline plans to re-launch its operations to Uganda in the next few weeks.

Emirates Airlines revealed that it will offer a free one-day ticket to visit the Expo 2020 Dubai, for all passengers on the airline's flights to Dubai, between October 1 and March 31, 2022.

The company explained on its website that passengers of "transit" flights on its flights can also obtain a free ticket to attend the international event, if their waiting period in the emirate is more than six hours.

Emirates announced that it will grant each of the passengers on its flights to Dubai, between October 1, 2021 and March 31, 2022, a free one-day entry card to “Expo 2020 Dubai” on any day the traveler chooses.

The carrier called on passengers on its flights during the event period, to obtain the free card, by entering the details of each passenger via a special link on its website, to be sent the cards by e-mail.

With regard to the lost cards for one-day entry to the exhibition, Emirates Airlines said that the traveler can enter the reservation reference or the ticket number again, so that the card will be resent to the email address that was originally provided.

Expo 2020 Dubai will be held from October 1, 2021 to March 31, 2022, becoming the first international “Expo” in the Middle East, Africa and South Asia region in the history of the international event, and the exhibition will welcome visitors from all over the world to participate in creating a new world, and in a celebration Creativity, innovation, culture and human progress over a period of six months.

flydubai’s expanded partnership with Emirates Airlines provides passengers with smoother connections through Dubai International Airport, which is today a global aviation hub that provides flights to more than 200 destinations between Emirates Airlines and the flydubai network. », including Australia, the Indian Ocean, Japan, South Asia and the United States.