The Maritime Department at the Ministry of Energy and Infrastructure organized a meeting for leaders of the maritime sector from various governmental and private institutions, to discuss efforts made to support the UAE’s re-nomination file for the IMO Council, and to identify best practices and projects that promote 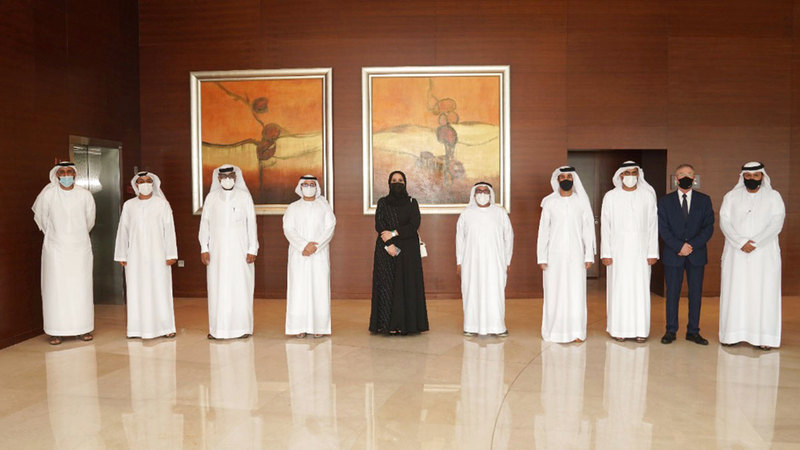 The UAE has managed to introduce fundamental changes in many decisions

The participants reviewed the UAE's competitiveness in adopting digital transformation in the maritime sector.

The Maritime Department of the Ministry of Energy and Infrastructure organized a meeting of the leaders of the maritime sector from various governmental and private institutions, to discuss the efforts made to support the UAE's re-nomination file for the IMO Council, and to identify best practices and projects that enhance the status of the state, and the confidence of the members of the organization in its maritime capabilities.

A statement issued yesterday said that the meeting comes as part of the country's efforts to consolidate its leadership as one of the best marine centers in the world, and to be among the most important countries influencing the development of the marine industry worldwide.

The discussion focused on reviewing the UAE's competitiveness in adopting digital transformation in the maritime sector, as participants from ADNOC, Abu Dhabi Ports, Fujairah Port and Ajman Port explained their achievements in this field.

The advanced advantages of the port management system and oil export terminals were also reviewed, highlighting the advantages of their advanced infrastructure, and their investment in dredging multiple sailing channels to ensure the sustainability of work in their ports.

The Minister of Energy and Infrastructure, Eng. Suhail Al Mazrouei, said that “the role of the International Maritime Organization is comparable to that of the United Nations, but in the world of the seas, which is the international body for issuing legislation and regulations that regulate the work of the maritime shipping industry, and everything related to safety, maritime security and protection of the marine environment.” and facilitating global seaborne trade. Therefore, we had to work to have an effective and influential presence at the center of decision-making, and to deal with the maritime sector from the initiative site, and not out of reaction.”

He continued: "During the previous two sessions of the organization's council, we succeeded in playing an active role in this regard, and we were able to introduce fundamental amendments in many decisions that take into account the large technical gap between the developed countries with their marine infrastructure, and the rest of the countries that are still seeking to develop their marine system. Issuing many decisions that ease the burdens on ship owners and marine companies, while motivating them to comply with new legislation, and adopt digital transformation in the marine industry.”

For his part, Sheikh Saeed bin Ahmed bin Khalifa Al Maktoum, Executive Director of the Dubai Maritime City Authority, said, “The candidacy file represents one of the main pillars that all partners in the maritime sector in the UAE at the federal and local levels, whether government agencies or private sector companies, pay attention to. adult.”

He explained: "Through this membership, the state seeks to continue to contribute to the Council's work, in terms of preparing strategies, policies and agreements, setting standards regulating maritime transport, and participating member states in promoting maritime safety standards and protecting the marine environment."

He pointed out that the UAE occupies a prominent and advanced position among the best leading marine centers in the world, in addition to being home to a number of the largest and most modern ports in the Middle East and the world, which makes it among the best shipping centers globally, so its presence in the Council constitutes an insatiable value to ensure Continuing to support the marine industry, and shaping the future of this vital sector.

The Minister’s Adviser for Maritime Transport Affairs at the Ministry of Energy and Infrastructure, Eng. Hessa Al Malik, said: “In the UAE, we have a sophisticated infrastructure that is among the most modern in the world, and the capabilities of our ports and marine facilities exceed international standards, forming a distinguished model in the field of digitization and infrastructure adoption. Smart.”

And she continued: “In the UAE, we are proud to be the first country in the world to support seafarers during their ordeal at the beginning of the (Covid-19) pandemic, and allow them to switch naval crews, after they were stranded at sea on their ships for several months, and also contributed The country has played a major role in protecting the marine environment, and helping the shipping sector comply with IMO legislation in reducing sulfur oxide emissions, by providing supplies of new, low-sulfur fuels at reasonable prices.