Big and small brands who say goodbye to Kris Wu, there is a sequel to the event

Chinanews client, Beijing, July 23 (Reporter Zhang Xu) Recently, the dispute between "top traffic" Wu Yifan and Du Meizhu caused public opinion and continued to arouse attention. On the evening of the 22nd, the Beijing Chaoyang Police issued a report on the relevant situation, and the "Beijing Police notified Wu Yifan incident" quickly reached the top of the hot search. Screenshot of Weibo Hot 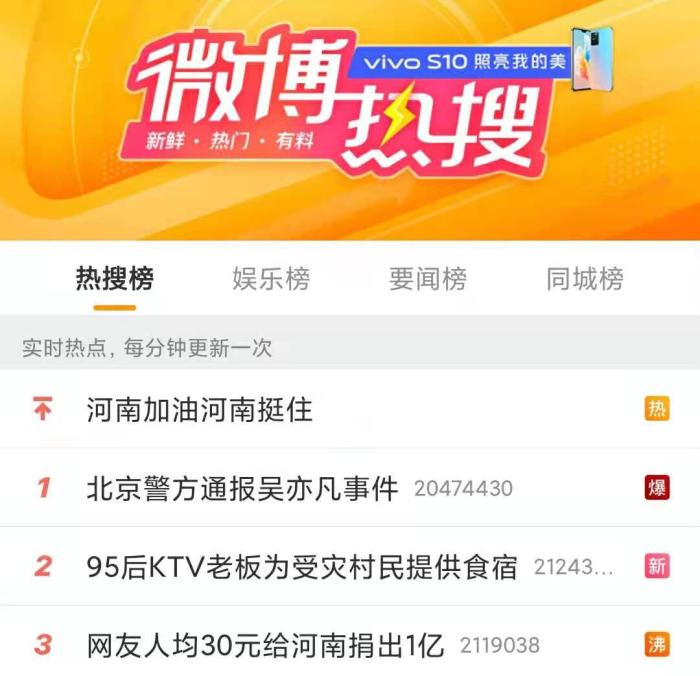 On the evening of the 22nd, the Beijing Chaoyang Police issued a report on the relevant situation, and the "Beijing Police notified Wu Yifan incident" quickly reached the top of the hot search.

The police report showed that the sexual relationship between the two parties was true, but there were other fraudsters behind the incident.

The police also stated that the police are still investigating the “Wu Moufan’s many times to trick young women into having sexual relations” reported by netizens and recent online mutual exposures, and will be dealt with according to the results of the investigation.

So far, there is still a sequel to the event.

The final result of the follow-up is still unknown, but the corporate brands that have cooperated with Wu Yifan have left one after another, announcing the termination of the contract with him and clearing the relationship.

What are the considerations for many brands to terminate their contract with Wu Yifan?

How much does Wu Yifan lose?

The Wu Yifan incident network quickly fermented on July 18. In the evening of that day, many brands that smelled a different "taste" immediately announced the termination of cooperation with Wu Yifan.

For example, Han Shu immediately announced the termination of the cooperative relationship with Wu Yifan; Liangpin Shop said that the contract has expired; Yunting APP said that in addition to terminating all cooperation with Wu Yifan, all content recorded by Wu Yifan will be removed from the shelves.

Many brands have announced the termination of their contract with Wu Yifan.

King of Glory also silently deleted Wu Yifan’s endorsement information. The official WeChat account of King Glory said in a comment that: the brand contract relationship with Wu Yifan has ended in the first half of 2021 and has not been renewed.

On the evening of July 19 and the early morning of the 20th, Wu Yifan ushered in greater losses. His three biggest endorsements: Porsche, LV, and Bulgari "draw the line" with them.

On the afternoon of July 20, the official Weibo of "L'Oreal Men" also announced: "L'Oreal Men has terminated all cooperation with Mr. Wu Yifan."

L'Oreal became the last brand to terminate the contract with Wu Yifan.

At this point, according to media statistics, within three days, for the 15 brands endorsed by Wu Yifan, all of Wu Yifan’s existing endorsements have been terminated, except for LV’s announcement of a "suspended cooperation."

It is worth noting that many brands that have no endorsement relationship with Wu Yifan also avoid it.

For example, on the afternoon of July 20, Ubisoft stated, “Ubisoft is committed to providing players with a positive and healthy play experience, and decided to remove Mr. Wu Yifan’s from the "Just Dance" National Bank game and the Just Dance Music library. "Big Bowl Wide Noodles" and related versions, and will provide players with other Chinese songs as compensation."

Netease's game "Ni Shui Han" also stated on the afternoon of the 20th that it will provide all players with a game nickname containing "Wu Yifan" with a free chance to change their name. Specifically, they will issue free name change posts via email.

Hu Keli, a lawyer of Beijing Yingke Law Firm, told Chinanews.com that the brand party signs a contract with an artist and invites him to endorse products, generally considering the artist’s positive image and drainage ability. Therefore, the agreement signed by both parties will restrict the artist’s behavior. Rich experience in methodological affairs often grants the brand the right to unilaterally terminate the contract.

“If the artist’s personal fault causes serious damage to the image, the brand’s contractual purpose cannot be realized, and the continued performance of the contract may result in heavy losses for the brand. The brand has the right to unilaterally terminate the contract in accordance with the contract.”

How much does Wu Yifan lose?

According to the 2017 Forbes China Celebrity List, Wu Yifan’s annual income reached 150 million that year, ranking tenth on the list.

How much will Wu Yifan lose in this contract termination storm?

There is no conclusion yet.

According to media reports, Ding Wei, an industry insider in the film and television industry, revealed that Wu’s single endorsement fee exceeds 10 million yuan, "most of which are around 15 million yuan per year, which has declined in recent years, and was higher in the past, with a price tag of more than 20 million yuan."

Nowadays, brands have terminated their contracts. If a huge amount of compensation is involved, in some cases, artists will be required to return the endorsement fee.

If calculated on the basis of an endorsement fee of 15 million yuan per year, more than a dozen brands will cancel their contracts with them, and the liquidated damages that need to be paid are at least hundreds of millions.

However, in the view of legal professionals, whether to pay or not depends on the terms of the contract.

Ding Wei said: "In the past few years, celebrities signed endorsements, and there has been no requirement to lose money for negative news. He (Wu Yifan) may have signed many of them before."

A reporter from Chinanews.com noticed that Wu Yifan's pending play "The Journey of the Hairpin" may not be able to be uploaded normally.

If the incident continues to ferment, regardless of the face-changing technology or the re-shooting of actors, the film and production platform Tencent Video will face huge losses.

It can be said that no matter how much compensation is paid to the brand, this incident will undoubtedly cause a serious blow to Wu Yifan's image and commercial interests, and he will suffer heavy losses.

According to data from the Tianyancha App, Wu Yifan has served as a shareholder of 5 companies, but he has either withdrawn from the ranks of shareholders or the related company has been cancelled. The cancellation period will be between June and September 2020.

At present, only one affiliated company of Wu Yifan is a Xiamen Yihe Yunqi Cultural Media Partnership (Limited Partnership). The executive affairs partner of this enterprise is Wu Lin (Wu Yifan's cousin), and Wu Yifan holds 99.99% of the shares. It is a major shareholder and ultimately benefits. people.

The data comes from Tianyan Check.

It is worth mentioning that recently, many Wu Lin affiliated companies have filed for cancellation and liquidation.

The more you eat, the bigger the melon,

The entertainers do not stand at attention,

Will lose both fame and fortune!

The entertainment industry is not a place outside the law,

The balance of the law will finally clarify things,

No matter who it is, violation of the law must be punished!