Take advantage of the rainstorm to play disaster marketing? "Be yourself, not everything can be rubbed"

Chinanews Client Beijing, July 21 (Reporter Li Jinlei) Extremely heavy rainfall hit Henan, and severe waterlogging occurred in cities such as Zhengzhou, causing heavy casualties and property losses. The severe flood control situation has made people across the country worry.   However, while all parties supported Henan, some companies took advantage of the rainstorm to play "disaster marketing" 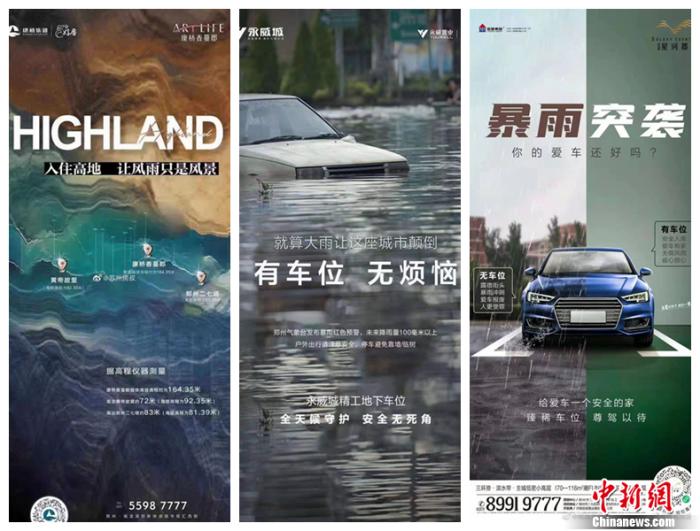 However, while all parties supported Henan, some companies took advantage of the rainstorm to play "disaster marketing", which aroused anger among netizens.

Some companies use the rainstorm for marketing.

Many companies take advantage of the rainstorm for marketing

On July 20, just as the heavy rain enveloped Zhengzhou, Kangqiao Group released a poster to advertise a project. The slogan was impressively written: "Stay in the highlands, let the wind and rain be just the scenery." The picture shows the elevation of the project. The elevation is about 164.35 meters, which is higher than the hometown of the Yellow Emperor and the Erqi Pagoda in Zhengzhou.

At the same time, there are also posters on the Internet that two other companies use the rainstorm to promote parking spaces.

Among them, a poster has the words "Yongwei City", and the picture is a car half-body submerged in water. The slogan reads "Even if the heavy rain turns the city upside down, there are parking spaces and no worries."

Another poster has the words "Yaxing Group" and a car indoor and outdoor comparison chart. The slogan is "Rainstorm, how is your car?", saying that there is no parking space. People will suffer even more if they are scrapped."

The above-mentioned enterprises' marketing actions by taking advantage of the hot spots have triggered condemnation from netizens, who were criticized as "it is not suitable to be smart at this time" and "this is difficult for the country to make money."

On the 21st, Cambridge Group issued a statement of apology, stating that it will conduct a deep review and introspection, sincerely accept criticism from all walks of life, and extend its most sincere apologies.

The relevant advertising screens will be deleted as soon as possible, and a special team will be set up to conduct strict review and processing.

Persons responsible for this incident were given accountability treatments such as dismissal, salary reduction, and demotion, and all staff members were notified as a warning.

According to official website information, Kangqiao Group was established in 2003, and its sales in 2020 will exceed 51.21 billion, ranking 63 in the national real estate sales list.

Kangqiao Group claims to be "people-oriented", but obviously this kind of unscrupulous marketing has deviated from this value.

Up to now, the other two companies, "Yongwei City" and "Yaxing Group" have not responded to the circulating posters, and the telephone on the posters cannot be connected.

According to reports, the official account of "Traveling on the Road to Zhengzhou" once published a tweet entitled "Rainstorm Warning: "I'm a little big, you bear it"", which aroused netizens' resentment.

Continuous heavy rainfall has caused serious water accumulation in some streets of Zhengzhou.

"Be yourself, not everything can be rubbed together"

The heavy rains are ruthless. In the face of disasters, the Chinese people always pay attention to "one side is in trouble and all sides support". It should be a time when all people are in the same boat. However, these companies did not try their best to make contributions to overcome the disaster. Clever, take advantage of disaster marketing.

In sharp contrast, at present, many companies have generously donated money and materials for Henan.

These "disaster marketing" companies do not help, they add blockages and lack empathy. It is no wonder that they will be cast aside by netizens.

The enterprise has three wrong views, malicious marketing, embarrassment, punishment notification or is already on the way.

The Advertising Law requires that advertisements must not interfere with social public order or violate good social customs. It is hoped that these companies will not only apologize, but abide by the law and not forget their roots and their morals.