Chinanews client, Beijing, July 20th (Reporter Wu Tao) Following the cancellation of "big and small weeks" by Internet "big factories", are bigger benefits coming? Recently, JD.com announced a two-month salary increase for employees throughout the year. Tencent, Xiaomi, and Kingsoft announced that they would give their employees stock incentives and greet them for several billion yuan. What happ 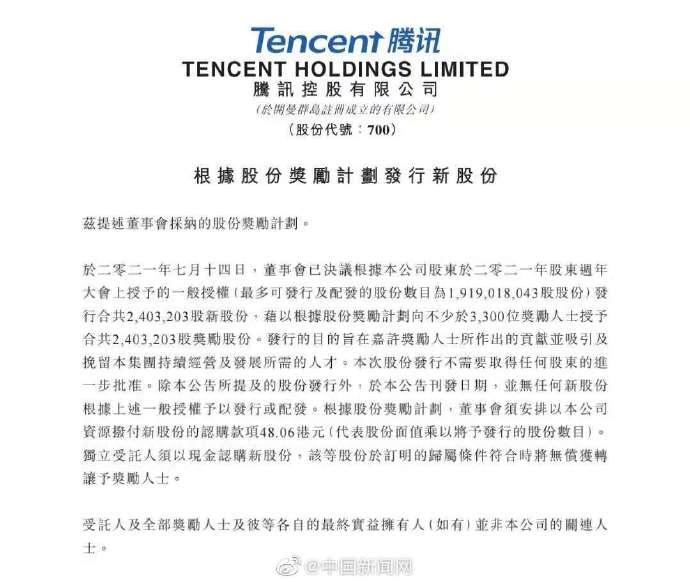 Recently, JD.com announced a two-month salary increase for employees throughout the year. Tencent, Xiaomi, and Kingsoft announced that they would give their employees stock incentives and greet them for several billion yuan. What happened behind this?

Tencent Holdings announced on the 14th that, according to the share award plan, a total of 2,403,203 award shares will be granted to no less than 3,300 award persons.

One day earlier than Tencent, JD.com announced on July 13 that from July 1, 2021 to July 1, 2023, it will take two years to gradually increase the average annual salary of employees from 14 to 16 in 2021. Direct salary increase for two months on the basis of the 1st of the month.

Jingdong announced a salary increase for its employees.

And Lei Jun, chairman and CEO of Xiaomi Group, has also been in a posture of "spreading out his wealth" recently.

On July 6, Lei Jun announced that 122 people, including technical experts, the first batch of candidates for the New Decade Entrepreneur Plan, and middle and high-level managers, will be rewarded 119.65 million shares of Xiaomi stock.

According to Xiaomi's stock price at that time, the value of this round of incentives was about 2.5 billion yuan.

Lei Jun announced the award of some employee stocks.

Among the above employees, there are about 700 outstanding young engineers who have been selected for Xiaomi's latest talent incentive program "Young Engineer Incentive Program", and they will receive a total of 16.042 million shares.

As the chairman of Kingsoft Software, Lei Jun also announced on July 5 that each Kingsoft employee will be gifted 600 shares, totaling approximately 4.8 million shares.

Although some Internet companies did not give out stocks, their benefits are also bullish.

In the recent period of time, a certain studio under Tencent tried to force get off work to leave at 6 o'clock; Kuaishou and Bytedance have successively cancelled the "small and large weeks".

Internet companies are "spending money" with a high profile, and many netizens have "slobbered" and said harshly: "It's really fragrant."

Many netizens said, "I admit, I'm sore." "Look at other people's company." "Tears of envy shed from the corner of their eyes."

Some netizens said, “Young people are very realistic now. Only money can retain talents. There is nothing wrong.” “How to plan carefully so that the boss can see it inadvertently.” (The editor adopts the way of writing manuscripts, you are free).

Netizens even teased that Internet giants such as Pinduoduo and Meituan were in line with Tencent and Xiaomi.

"This kind of thing should be'rolled up', don't stop."

It turns out that the overtime culture of Internet companies has been criticized, but only in terms of income, industry benefits can be used, and it ranks among the best in many industries.

But at this time, it is neither a year-end bonus issue nor an important time node. Why do Internet giants send benefits "inexplicably"?

Data map: the scene of a job fair.

Some analysts pointed out that this is the Internet giants forced by regulatory pressure.

Some analysts also pointed out that the benefits of Internet companies conceal the mystery, "donkey dung eggs are on the surface", but in fact there are not many beneficiaries.

"JD’s 16 salary package does not include more than 100,000 couriers? Didn’t you see the average salary? Didn’t you see the increase in two years? In general, this is equivalent to drawing a "big pie". It is still uncertain whether you can get it. , And can'tether' you for two years." Some netizens suggested.

"Xiaomi’s 122 employees received about 120 million ten-year equity incentives, and the number of people who benefited is small. I don’t know if you have noticed that the plan is based on performance evaluation and the stock maturity period will last as long as ten years." According to Xiaomi, This effectively achieves a high degree of binding between personal income and company performance.

But it's better than nothing. In short, the welfare of Internet companies has suddenly improved. This is a good start. What do you think?