Chinanews, July 19th, how do you view the economic data in the first half of the year? How to judge the annual trend? How to do economic work in the second half of the year? In response to the above topics, the spokesperson of the National Development and Reform Commission Yuan Da responded on the 19th. Data map: wharf. (Drone photo) Photo by China News Agency reporter Chen Jimin   On the 19th 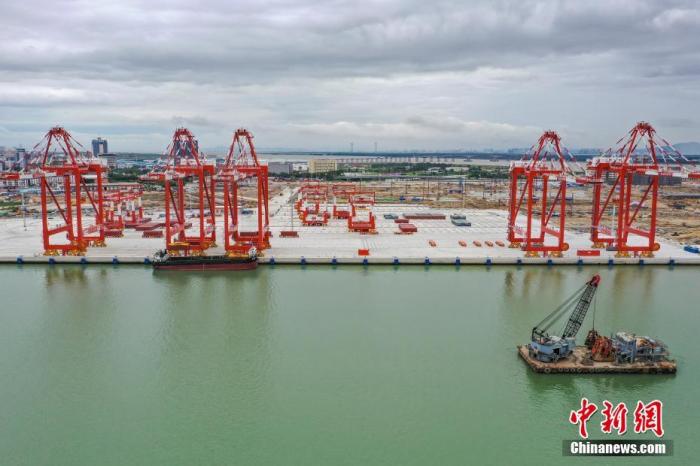 Chinanews, July 19th, how do you view the economic data in the first half of the year?

How to judge the annual trend?

How to do economic work in the second half of the year?

In response to the above topics, the spokesperson of the National Development and Reform Commission Yuan Da responded on the 19th.

On the 19th, the National Development and Reform Commission held a press conference.

Yuan Da pointed out that since the beginning of this year, in the face of the severe and complex external environment and the contradictions in the domestic economic recovery, all regions and departments have coordinated epidemic prevention and control and economic and social development in accordance with the decisions and deployments of the Party Central Committee and the State Council. Work, fully implement the "six guarantees" task, consolidate the major strategic achievements in the fight against the epidemic, and have achieved remarkable results in economic recovery, and the economic operation is in a stable and stable state of strengthening and improving.

First, the foundation for economic recovery continues to be consolidated.

In terms of physical quantity indicators, in the first half of the year, the electricity consumption and freight volume of the whole society increased by 16.2% and 24.6% year-on-year respectively, and the two-year average growth rate was 7.6% and 7.2%, which matched the economic growth well.

The potential for domestic demand continued to be released. In the first half of the year, fixed asset investment and total retail sales of consumer goods increased by 12.6% and 23% year-on-year, respectively. The average growth rate for the two years was 4.4%, an increase of 1.5 and 0.2 percentage points respectively over the first quarter.

The reform and opening up were further promoted, and the vitality of development was further stimulated. The newly established market entities maintained rapid growth in the first half of the year, and the import and export of goods denominated in RMB increased by 27.1%.

The third is the continuous improvement of development quality and efficiency.

The ability to innovate in science and technology has been continuously improved, the transformation and upgrading of traditional industries has accelerated, and the industrial structure has continued to be adjusted and optimized.

The summer grain harvest has been harvested again, and the foundation of agricultural production has been further consolidated.

At the same time, corporate efficiency has grown rapidly. In the first five months, the profits of industrial enterprises under the regulations have increased by 83.4% year-on-year, and the average growth rate has been 21.7% in the two years.

Fourth, market confidence is expected to stabilize and improve.

In June, the manufacturing purchasing manager index (PMI) and the non-manufacturing business activity index were 50.9% and 53.5%, respectively, which have remained above the prosperity and decline lines for 16 consecutive months.

At the same time, foreign investors' confidence in China's economy continued to increase. The actual use of foreign capital denominated in RMB in the first half of the year increased by 28.7% year-on-year, and increased by 27.1% year-on-year.

Resident income has increased steadily. In the first half of the year, the national per capita disposable income of residents increased by 12% year-on-year in real terms, and the two-year average growth rate was 5.2%, an increase of 0.7% from the first quarter.

The level of social security and public services will be further improved, continue to adjust the basic pension for retirees, increase the central adjustment of the basic pension insurance fund for enterprise employees, establish and improve the basic medical insurance outpatient mutual aid guarantee mechanism for employees, and promote the implementation of national fitness facilities to make up for the shortcomings of the society. Six major public service projects including the bottom line of service facilities.

"At the same time, we also see that the economic recovery process is still facing difficulties and challenges, especially some uncertain, unstable, and imbalanced issues are still prominent. From an international perspective, the global epidemic is still evolving, and the risks in the recovery process of the world economy Still accumulating, economic trends and macro policies among different economies have diverged, and global inflation has risen significantly. From a domestic perspective, the production and operation of some mid-and-downstream industries and small, medium and micro enterprises are still relatively difficult, and consumption of life services such as tourism and accommodation has recovered relatively Lag, hidden risks in some areas exist to varying degrees." Yuan Da said.

"In the next step, we will thoroughly implement the decisions and deployments of the Party Central Committee and the State Council, closely track and analyze changes in domestic and foreign situations, coordinate economic operations in the second half of this year and next year, implement scientific and precise macro-control, and maintain the continuity, stability, and sustainability of macro-policy. , Continue to deepen supply-side structural reforms, focus on expanding effective domestic demand, vigorously support the development of the real economy, unswervingly promote reform and opening up, and further strengthen basic people’s livelihood protection, especially in response to new situations and problems facing economic recovery, and timely effective measures , And strive to maintain the stable operation of the economy within a reasonable range." Yuan Da said that with the implementation of various policies and the further manifestation of effects, "we are fully confident, capable, and capable of achieving the annual economic and social development goals and tasks."