Last week, the local financial markets continued to enhance their market gains by 36 billion dirhams, accompanied by a billion daily liquidity, most of which were concentrated in the Abu Dhabi Securities Exchange, which for the first time in its history breached the 7040 points barrier. 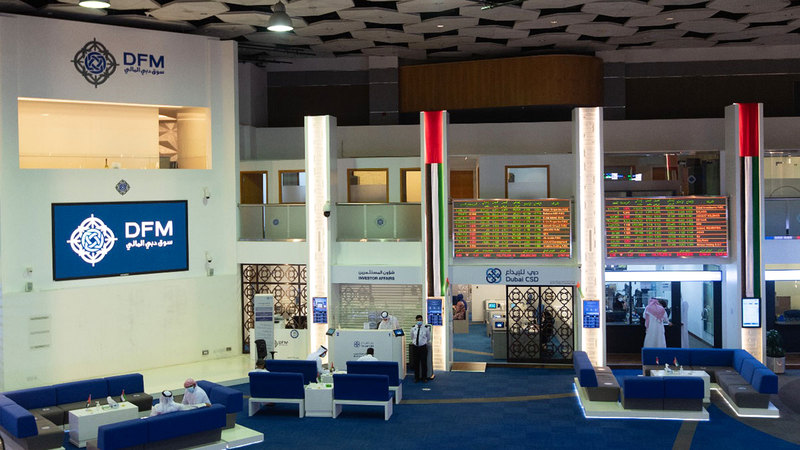 The market value of companies listed in the local capital markets amounted to 1.599 trillion dirhams

The shares of 8 companies out of 30 companies in the Dubai Financial Market increased.

Last week, the local financial markets continued to boost their market gains by 36 billion dirhams, accompanied by a billion daily liquidity, most of which were concentrated in the Abu Dhabi Securities Exchange, which for the first time in its history breached the 7040 points barrier.

By the end of yesterday's session, the market value of the companies listed on the Dubai Financial Market and Abu Dhabi Securities Exchange amounted to two trillion and 599.8 billion dirhams.

Over the past week, the general index of the Abu Dhabi Stock Exchange rose 64 points, equivalent to 0.9%, compared to the closing of the previous week, while its counterpart in the "Dubai Financial" recorded a decline of 1.3%, equivalent to 37 points during the same period.

According to the data of the two markets during yesterday's session alone, the Dubai Financial Market index closed slightly lower, by two points, at the level of 2780 points, and with a total value of 138 million dirhams.

In the «Abu Dhabi Securities», the general index of the market closed slightly lower, up to seven points at the level of 6963 points, with transactions worth a total of 1.2 billion dirhams.

Commenting on, the expert in financial markets, Abdel Qader Shaath, told «Emirates Today», that «the Abu Dhabi Securities Exchange recorded, during the past week, for the first time, its highest level ever, reaching 7040 points, which is technically its highest level, and the volume of The market value of the listed companies reached a historical level and a new value, while liquidity maintained at one billion rates every day, and this gives more confidence to investors and a continuous depth of the market.”

Shaath added that "there are a number of stocks in the Abu Dhabi market, whose performance was distinguished to a large extent, during the week's sessions, in several sectors that achieved great heights that touched them for the first time, which increased the appetite of individual and institutional investments."

Shaath stressed that in general, it can be said that "the Abu Dhabi market is still coherent and continuous in technical terms, in achieving strong heights, supported by the volumes of strong torrents," pointing out that the closings of a large number of shares, during yesterday's session, are the best ever.

He stated that "the occasional technical level that dominated the week's performance, was accompanied by a weak liquidity revolving between 150 and 180 million dirhams, stressing the market's need for new stimuli, in addition to the companies expected announcement of the results of the first half, which everyone hopes will contribute to moving stocks upward."

In addition, Emaar Properties stated, in a disclosure posted on the Dubai Financial Market website, that it expects the proposed merger with Emaar Malls to be completed by the end of this year.

The company stated that it is currently conducting the normal regulatory approval procedures with the Securities and Commodities Authority, in order to merge with "Emaar Malls" and de-list the latter.

• Billion daily liquidity, most of which is concentrated in the "Abu Dhabi Securities Exchange".