The Abu Dhabi Securities Exchange index, for the first time in its history, breached the 7000 points barrier during the middle of the last hour of yesterday’s trading session, reaching 7025 points, before profit-taking operations hit and brought the index back to a little less than 7000 points, at the end of dealing, specifically at 6995 Point 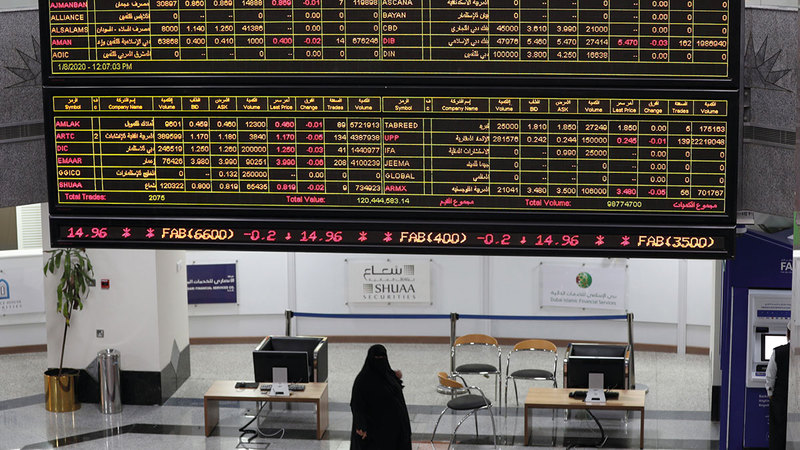 21 billion dirhams of market gains for shares in the "market"

The Abu Dhabi Securities Exchange index, for the first time in its history, breached the 7000 points barrier during the middle of the last hour of yesterday’s trading session, reaching 7025 points, before profit-taking operations pressured and returned the index to a little less than 7000 points, at the end of dealing, specifically at 6995 point, with an increase of 0.67%.

Liquidity maintained its usual billion rates, several months ago, as yesterday it amounted to 1.2 billion dirhams, implemented through 5284 deals, and the market value of the listed companies increased by 21 billion dirhams, bringing the total increase in two sessions to 40 billion dirhams.

With this closure, the market value of the companies listed on the market reached a new peak at the level of one trillion and 220 billion dirhams.

For his part, the expert in financial markets, Wadah Al-Taha, told «Emirates Today», "The Abu Dhabi Securities Exchange is still strengthening its gains for the ninth consecutive session, setting new records, with the support of (International Holding Company) and the successful listing of (Alpha Abu Dhabi), which In it (International Holdings) owns a large stake.”

He added that the two companies acquire a large share of trading, and push the rest of the shares to rise in an atmosphere of great optimism.

Al-Taha indicated that, according to a comparative study, based on market data and statistics, Abu Dhabi Securities Exchange witnessed a major boom, as trading volumes increased by 600% during the first half of this year, compared to the same period in 2020, and increased by 37 percent. % since the beginning of 2021.

And he indicated that the results of the second quarter are very important to complete this momentum in the Abu Dhabi Securities Market, especially the banking sector, which is expected to give a new impetus to the listed shares and raise the indices to new record levels.

He stressed that the psychological factor of investors in the Abu Dhabi market also plays a major role in the momentum of transactions, as there is confidence in the performance of companies in addition to the clear institutional investment by funds and market makers, noting that the market's attractiveness is also witnessing an upward path for foreign investment.

Al-Taha said that the performance indicators of the companies listed on the Abu Dhabi market are good, and the levels of liquidity confirm the market's attractiveness to individual and institutional investors.

According to the figures in the Dubai Financial Market, the general index of the market decreased slightly, by one point at the level of 2803 points, with transactions totaling 138 million dirhams.

Al-Taha indicated that for the Dubai Financial Market, calm still dominates transactions, pending the results of the second quarter of the listed companies, stressing that the market needs liquidity incentives that restore the momentum to trading again, and encourage investors to enter, especially since price levels are a great opportunity to buy.