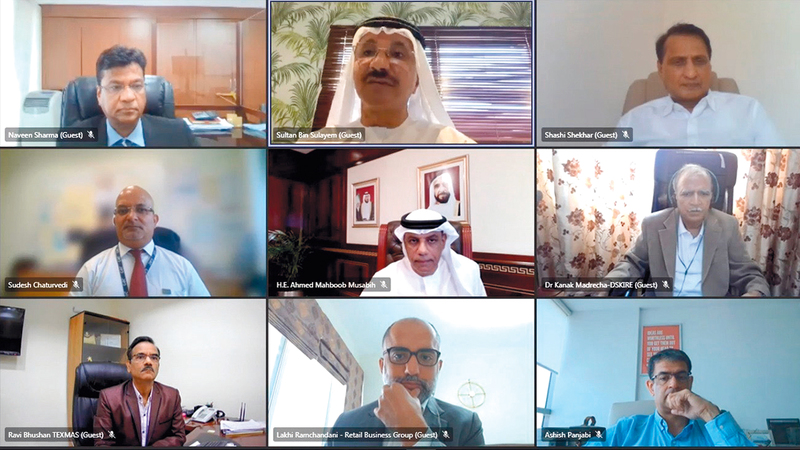 During a meeting, he reviewed the extension of Dubai's commercial lines network to 200 new cities

The second meeting of the advisory board of "Dubai Customs" was held remotely.

Sultan Ahmed bin Sulayem, Chairman and CEO of DP World Group, Chairman of Ports, Customs and Free Zone Corporation, Chairman of the Dubai International Chamber of Commerce, Sultan Ahmed bin Sulayem, confirmed that Dubai’s foreign trade is likely to achieve strong growth during the current year 2021, with the support of a set of main pillars, after the pandemic has proven «Covid-19» on the dynamics of the UAE in general and the Emirate of Dubai in particular in dealing with global crises, and the emirate’s flexible economic solutions in terms of stimulus packages and the development of legislation, according to the directives of His Highness Sheikh Mohammed bin Rashid Al Maktoum, Vice President and Prime Minister of the UAE Ministers, Ruler of Dubai, in addition to logistics.

Bin Sulayem explained during the second meeting of the Advisory Council of Dubai Customs in 2021, which was held via visual communication technology, that one of the most important supporting pillars: the new Dubai International Trade Map, which includes work to extend the Dubai trade network network to 200 new cities, to consolidate The emirate's role in the global trade movement, pointing to the efforts of the Ports, Customs and Free Zone Corporation to increase its investments in the field of ports and logistics services in many countries in Africa and Asia.

He added: "DP World Group signed a memorandum of understanding with the Ethiopian Ministry of Transport, to develop the Ethiopian side of the road connecting Ethiopia and Berbera, to be one of the most important trade and logistic corridors for global trade lines, and (DP World) and its partners intend to invest up to one billion dollars. dollars over the next 10 years in developing the supply chain infrastructure along the corridor,” calling on the business sector and traders in Dubai to benefit from the global presence of the group.

Bin Sulayem stressed that the UAE is ranked first globally in the level of vaccination doses per 100 people, as well as in the number of examinations, and the success of its strategy in dealing with the pandemic and vaccinating more than 70% of the target group, among the most important factors supporting the economy in general and the trade and tourism sectors in particular.

For his part, Director General of Dubai Customs, Ahmed Mahboob Musabih, confirmed that the proactive economic policies adopted by the government in dealing with the repercussions of the “Covid-19” pandemic crisis, and the supporting economic packages, played a positive role in limiting the negative effects of the pandemic on various sectors. vitality and economic and commercial activity.

He said, "We are working at (Dubai Customs) to expand the base of trade exchanges to reach the volume of Dubai's trade to two trillion dirhams during the next five years."

In addition, the Dubai Shipping Agents Association reviewed a number of initiatives that are expected to play a positive role in the future shipping, logistics and supply chain sector, namely: the Hyperloop project from DP World, 3D printing, and the Dubai South project.

He revealed that the department launched more than 1,000 initiatives in the past five years, targeting 7.63 million people, at a time when the level of happiness of partners and customers about the community department's initiatives reached 90% in 2020.

He added: “In the field of sustainability, we have achieved a saving of one million dirhams in water and electricity in the past five years, with the application of 95.4% of the Dubai paperless strategy, and the recycling of 379 tons of paper and waste, and the implementation of 56 environmental projects, with the full application of international ISO standards. Over the past year, the department has 145 community initiatives targeting 378,000 people.