Officials in the retail sector and shopping centers confirmed that the “end of the season” offers, which were offered by outlets with different rates of discounts, contributed to revitalizing the demand for shopping centers in Dubai with rates exceeding 30%, compared to normal periods, as well as reviving sales. Today» An 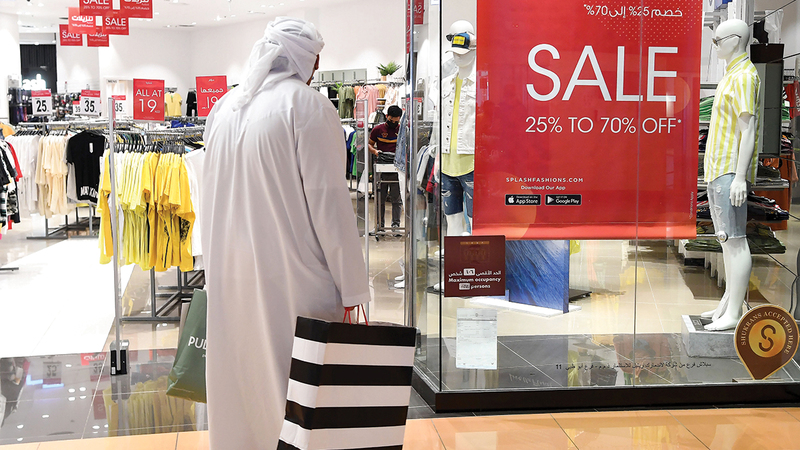 Officials in the retail sector and shopping centers confirmed that the "end of the season" offers, which were offered by outlets with different rates of discounts, contributed to revitalizing the demand for shopping centers in Dubai with rates exceeding 30%, compared to normal periods, as well as reviving sales.

They explained to "Emirates Today" that these offers allow consumers to obtain goods and products at discounted prices, and also allow stores to increase sales and sell the previous season's models.

And "Emirates Today", during a field tour of a number of shopping centers in Dubai, monitored discounts ranging from 25% to more than 50%, at a time when consumers said that the reductions were concentrated in the previous season's models of clothes and shoes.

The consumer, Muhammad Hassan, said that the "end of the season" offers - which were offered by several stores on a large scale in shopping centers in Dubai, and have been going on for days - provided the opportunity to purchase family necessities such as clothes and shoes, especially as they provide discounts of varying rates on those products.

For her part, the consumer, Mona Othman, said that these types of offers are distinguished by the fact that they extend for days, and offer discounts on products from the finished season, while keeping pace with the launch of new models, pointing out that most of the discounts vary between 25% and more than 50%.

As for the consumer, Ahmed El-Sayed, he pointed out that the “end of the season” offers are a suitable opportunity for most consumers to buy gifts and family necessities, in preparation for the holiday and travel season, especially that these offers extend for several days compared to the “major discounts” that are limited to only three days.

In addition, Majid Saif Al Ghurair, Chairman of the Board of Directors of the Dubai Shopping Centers Group, head of the “Reef Mall” and “Burjuman” centers, said that the “end of the season” offers, which were presented by a group of stores during the recent period, contributed to stimulating the turnout in large proportions to the shopping centers. Shopping in Dubai, at rates of about 30% compared to normal periods.

Al Ghurair stressed that the discounts offered by these offers contribute to reviving the sales of shopping center facilities in general, such as restaurants, cafes or shops.

He added that keeping pace with these offers for the holiday season contributed to stimulating sales in various sectors, especially clothes and shoes, noting that consumers who plan to travel consider these offers a good opportunity to obtain goods at reduced prices.

Al Ghurair stressed that strict safety measures are applied, with precautionary measures, during periods of high demand for shopping centers, as part of efforts to combat the spread of the new Corona virus (Covid-19), with an emphasis on wearing masks and social distancing distances between shoppers.

In the same context, Nasreen Bostani, Director of Public Relations and Corporate Communications at Mercato and Town Center Jumeirah, said that shopping centers have recently witnessed an increase in turnout rates of more than 30% compared to regular periods, supported by offers made by stores, especially In the ready-to-wear and footwear sectors, in the name of “end-of-the-year offers”, they included discounts in varying proportions. Boustany agreed that these offers raise the competitiveness of stores, through the gradual expansion of discount rates to attract consumers and raise sales shares.

Boustani pointed out that the preference of most consumers to buy from these offers supports the opportunities to spend long times in shopping centers, especially during the summer season, which is positively reflected on the sales of stores in general, even those that did not participate in offering discounts, in addition to restaurants and entertainment areas. And cinemas, and said that the spread of the distribution of vaccines against the “Corona” virus, and the strict application of precautionary safety measures, are among the things that support and motivate an increase in the demand of a large number of consumers to shopping centers in Dubai.

In the same context, John Patrick, a sales official in a ready-to-wear store in a shopping center in Dubai, said that most stores, especially clothing and shoe stores, gradually began offering “end-of-season” offers about seven days ago, and it is expected that they will continue until the end of June. Discounts of up to 50% on last season's models.

He stressed that these offers allow consumers to obtain goods and products at discounted prices, and also allow stores to increase sales and sell the previous season's models.