Chinanews.com Qinghai Minhe, June 15th, title: Qinghai "East Gate" Minhe: Thousand acres of flower fields give birth to a "flower" economy that enriches the people   Author Li Junshi Yanshou   During the Dragon Boat Festival, among the green leaves of Haidong Citizens and Hui and Tu Autonomous County, known as the "East Gate" of Qinghai, among the two mountains of Nanyuan, there are thousands 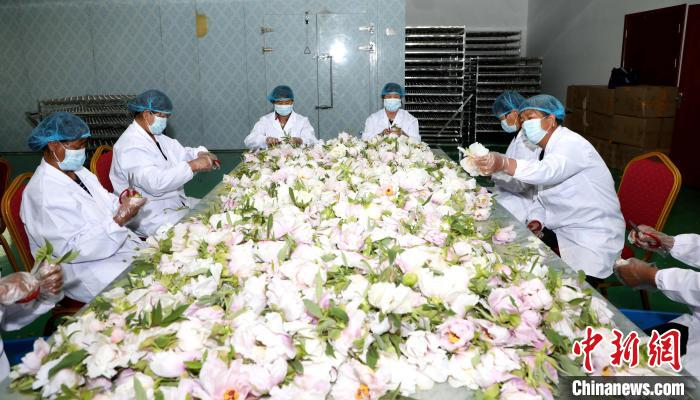 During the Dragon Boat Festival, among the green leaves of Haidong Citizens and Hui and Tu Autonomous County, known as the "East Gate" of Qinghai, among the two mountains of Nanyuan, there are thousands of pure white, pale pink, rose red, bright yellow... Peony and peony flowers are fresh and elegant.

"The low altitude of our people and the warm weather conditions and soil texture made the oil peony trial successful in 2016. After several years of careful cultivation, now there are 5 series of 15 products of oil peony, and they are on sale. Not bad." He Jing, the person in charge of Minhe Peony Industry Cultural Expo Park, told reporters.

The picture shows workers placing flowers in the setting device.

Seven or eight flower pickers were busy picking flowers among the flowers at 8 o'clock in the morning.

He Jing introduced that these peony flowers will be used to make whole flower tea, petal tea and stamen tea after drying.

All peony whole flower tea uses the whole flower that is budding in the oil-used peony varieties in the garden. The unopened one cannot be made into whole flower tea. The one that has been opened is picked by bees, which will reduce the nutrient content of pollen, so only pick those buds that are ready for release. Peony flowers.

According to the staff of the Propaganda Department of the Minhe County Party Committee, the Minhe Peony Industry Cultural Expo Park is the largest oil-use peony planting base in Qinghai Province. After it was completed and opened in 2016, it has become a check-in place for viewing peony in Minhe County, attracting tourists from all over the world. , Leisure flower viewing.

"The peony garden has transferred 700 acres of land from 380 households in Nanyuan Village. At present, there are 1,100 acres of land planted with more than 2 million oil peonies. In addition to being viewed by tourists, peony seed oil and peony flower stamens are produced by substituting processing methods. Tea, peony whole flower tea, peony polypeptide mask, peony series cosmetics. In September 2020, peony seed oil was recognized as a green food grade A product by the China Green Food Development Center." He Jing said.

In the full-flower baking workshop, some of the more than ten workers trim the flowers to remove impurities, some place the flowers in the setting device, and some are sorting the dried flowers that have just been taken out of the baking equipment...After cleaning, trimming, and setting , 36 hours of low-temperature baking of the peony flower becomes a dried peony full flower.

After more than ten processes of high-quality whole flower tea, one can be selected from more than ten flowers, and each flower can be sold for 30 yuan.

"Making peony whole flower tea is only one of the peony'flower' series products for oil. There are also peony seed oil, peony flower tea, peony petal tea, peony wine and other products. In 2020, more than 1,500 kilograms of peony seed oil will be processed to produce peony The whole flower tea has 50,000 peony flowers and 50 kilograms of peony flower tea. The accumulated income is more than 3.5 million yuan.” He Jing introduced that since the opening of the garden on May 1 this year, the Peony Garden has received a total of tourists from inside and outside the county as of May 31. More than 30,000 person-times have achieved tourism income of more than 800,000 yuan.

Hou Sanjie, a 64-year-old villager from Nanyuan Village who was picking petals, told reporters that all of her family’s 7 acres of land was transferred to the Peony Garden, and there was a land transfer fee of 700 yuan per acre. “I have been working in the Peony Garden for 6 years and 70 per day. For RMB, you can earn 20,000 to 30,000 in a year." Sister Hou said.

The picture shows the Peony wine being sold.

At present, Peony Garden has integrated regional resources and formed a linkage between production, supply and marketing. With the industrial development model of "company + base + farmer households", it has gradually driven the surrounding people to increase their income.

"We need more than 130 people every year to open the garden in spring. In addition to oil peonies, we have introduced imported varieties of peonies from Japan and France according to different flowering periods, as well as peony, lavender, roses, perfume lilies and other flowers. From March By the end of October, more than 40 people will be needed to manage and maintain. Last year alone, we paid 480,000 yuan in wages. In the past six years, the annual labor wages have been between 400,000 and 600,000 yuan." He Jing said.

"Peony is known as a'iron crop'. It is planted for 50 years without changing the stubble. The whole body of the peony is a treasure. At present, our products have been sold to all parts of the country through the Internet. Local tourists continue to buy back after they feel the benefits of the products. Therefore, there is no need to worry about the market. It is not just a dream that the output value of the peony garden can reach ten million in the peak production period." He Jing said that with the support of the local government, the peony garden will continue to build a base for leisure agriculture, tourism, research and learning, and characteristics. A comprehensive tourist resort of plateau peony culture that combines homestays, health and wellness.

In 2021, we will strive to create a "flower" economic income of about 4.5 million yuan, and realize the income increase of the peony industrial park and the villagers.