How does China prevent pork prices from fluctuating?

(Economic Observation) How does China prevent pork prices from fluctuating?   China News Service, Beijing, June 9 (Reporter Wang Enbo) The price of pork in China, which once rose to a high level, is now continuing to fall. However, cheap pork makes people call it "really fragrant" and also brings new problems. On February 22, staff were sorting pork for sale in a supermarket in Taiyuan City, Sha 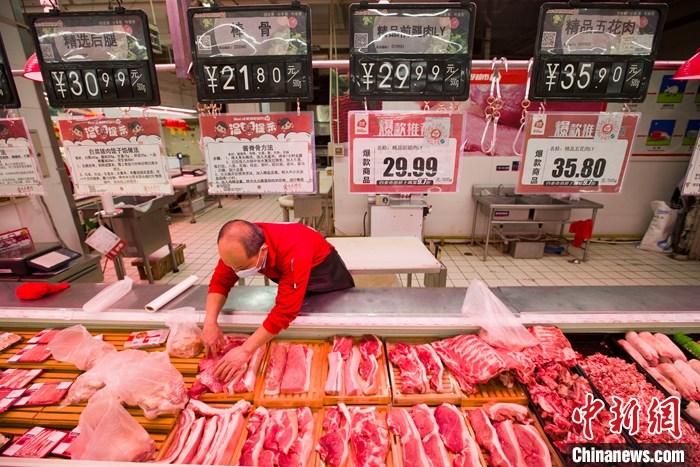 (Economic Observation) How does China prevent pork prices from fluctuating?

China News Service, Beijing, June 9 (Reporter Wang Enbo) The price of pork in China, which once rose to a high level, is now continuing to fall. However, cheap pork makes people call it "really fragrant" and also brings new problems.

On February 22, staff were sorting pork for sale in a supermarket in Taiyuan City, Shanxi Province.

Recently, China's National Development and Reform Commission and other departments jointly issued the "Improving the Government's Pork Reserve Regulation Mechanism and Doing a Good Job in the Pork Market to Guarantee Supply and Stabilize Prices", requiring both "ups" and "downs" to be emphasized on the prices of live pigs and pork.

As the main source of meat and animal protein intake for Chinese residents, ensuring pork market supply and price stability are closely related to the vital interests of the people.

The abundance of early warning indicators is an example.

The "Pig and Food Price Comparison" indicator is an important indicator that intuitively reflects the comparative relationship between the costs and benefits of pig breeding, and is widely concerned by the pig breeding industry.

Guo Liyan, a researcher at the Decision Consulting Department of the Chinese Academy of Macroeconomics, told a reporter from China News Agency that the current round of African swine fever has brought a big test to the supply and stable prices of pork and meat protein products for the people’s livelihood. The price control department has drawn a lot of experience from it. When the price of pork and its upstream corn and other products fluctuate sharply, the price of pigs and grains may fluctuate, thus losing its original significance as a reference indicator.

In response to this phenomenon, the "Preplan" continues to use the price ratio index for pigs and food, while adding two more indicators: one is "the rate of change in the stock of reproductive sows", which can significantly improve risk early warning and reserve adjustment work. The second is the addition of the “average retail price of lean meat in 36 large and medium-sized cities” indicator, which is closer to consumers’ feelings, and can provide timely warnings and responses when pork prices rise excessively.

Zhu Zengyong, a researcher at the Beijing Institute of Animal Husbandry and Veterinary Medicine of the Chinese Academy of Agricultural Sciences, gave an example in an interview with a reporter from the China News Service. Incorporating the stock of reproductive sows as an early warning indicator into the adjustment mechanism can play a leading role. Changes, to give an early warning of changes in pig production capacity in the next 8 to 10 months.

Another major change in the "Preplan" is the classification of reserves. According to the different positioning of the government's pork reserves, there are separate regular reserves and temporary reserves.

Temporary reserves are proposed based on the practice of this round of regulation and actively borrowing from other relevant important commodity reserve construction experience. They are mainly used for purchasing and storing when the price of live pigs drops excessively and the production capacity drops sharply, in order to stabilize production expectations and achieve "supporting the market" and stabilizing production capacity.

At the same time, the size of the reserve has been greatly increased compared with the past, and the regulation and control capabilities have been significantly enhanced.

What are the considerations for this move?

Guo Liyan said that this is to better balance the interests of buyers and sellers.

When pork prices rise, it will have an impact on consumers' pork consumption preferences.

And when the price of pork enters a steady decline, more attention should be paid to the stability of the producer link, which is actually creating good conditions for future production capacity and output stability.

With the continuous recovery of live pig production capacity and the steady decline of pork prices, the introduction of a complete set of mechanisms to ensure supply and stabilize prices is conducive to stabilizing producer expectations.

How will the pig market develop after the "Preplan" is released?

The above-mentioned person in charge stated that as of the end of April, the stock of reproductive sows in China had returned to 97.6% of the normal year. The relevant parties expect that the number of pigs for slaughter in the second half of this year is expected to return to the normal level.

As production capacity continues to recover, prices of live pigs and pork are expected to continue to return to a reasonable level.

At the same time, the scale, standardization and biosafety protection level of pig breeding have been significantly improved compared with the past.

Zhu Zengyong analyzed that in the short term, June is usually a low season for pork consumption. In addition, the current super-large pigs still account for a certain proportion of the pig herd structure, and it is expected that the market will not be digested until the end of June.

In the later period, with the overall increase in the enthusiasm of pork consumption and the promotion of consumption during the National Day and Mid-Autumn Festival, it is expected that pig prices will experience a seasonal rebound in August and September.

However, the overall supply of live pigs is relatively abundant, so there will not be much room for rebound.

He further pointed out that this "preplan" focuses on ensuring the overall stability of life and production and the stability of pork prices.