Chongqing: Accelerate the creation of a "1 hour commuting circle" in the main city metropolitan area 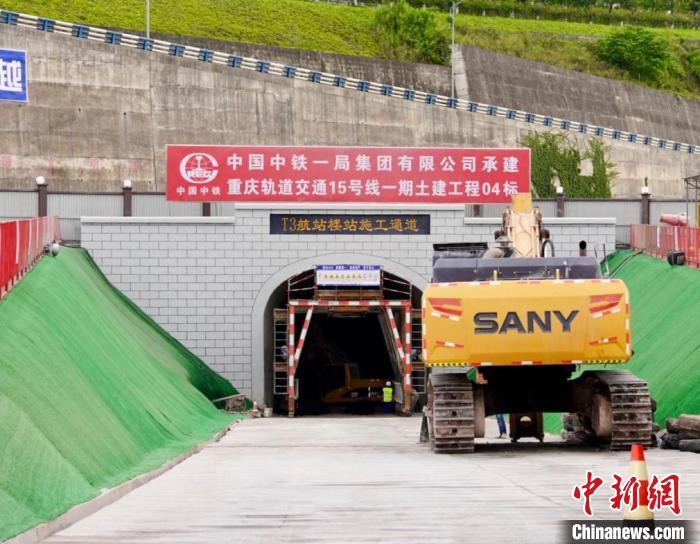 China News Service, Chongqing, June 9th (Guanxin) reporter learned from Chongqing Transportation Investment Group on the 9th that Chongqing is accelerating the construction of the backbone network of the "1 hour commute circle" in the main urban area, and the construction of 9 central urban areas and 21 main urban areas. The rapid rail network between urban and metropolitan areas enhances the travel experience of citizens.

The urban rail express line being constructed by Chongqing Transportation Development Railway Group (hereinafter referred to as "Chongqing Railway Group") is one of the main supports for Chongqing's construction of the "1 hour commuting circle".

The picture shows the construction channel of the T3 terminal station of the first phase of the urban rail express line 15 project.

"Compared with the ordinary urban rail line, the urban rail express line has fast operation speed, large station spacing, large capacity, convenient transfer, and wide service range. The maximum operating speed can reach 140 km/h, which can meet the needs of different passenger flows and improve transportation. Efficiency." According to Wang Meng, chief engineer of Chongqing Railway Group, the urban rail express line 15 is 71.53 kilometers long and will be constructed in phases one and two. It is the first urban rail express line in Chongqing that connects the three valleys of east, middle and west. Later, it can effectively alleviate the congestion in the central trough and promote the integration of external transportation hubs.

In 2020, the passenger throughput of Chongqing Jiangbei International Airport will accumulate 34.938 million passengers, ranking fourth in the country.

"For the convenience of tourists, the T3 terminal station is a two-story underground four-line station jointly built by Line 15 and Line 26. After completion, it can transfer to Line 10 and connect with the Chongqing Jiangbei Airport Terminal and Intercity The railway and the long-distance passenger terminal are connected.” At the construction site of the T3 terminal station of the first phase of the urban rail express line 15 project, Wang Dian, deputy general manager of Chongqing Railway Group, introduced to reporters.

"In order to control noise and dust, we use fog cannon cars and sprinkler systems to control dust, and adopt sound-absorbing and sound insulation measures such as noise-prone generators, steel bar cutters and other equipment." Chongqing Railway Group Urban Rail Chen Song, the project leader of the first phase of the express line 15 project, said that the first phase of the urban rail express line 15 is expected to be completed in 2026.

The picture shows the construction site of the Bi Copper Line Project of the Urban Rail Express Line.

It is reported that "PPP+TOD" is a rational package of rail transit projects and land resources around the site, with rail transit stations as the center, through the establishment of comprehensive development of high-density, composite functional communities, to achieve a benign interaction between rail transit stations and the surrounding area Win-win with value-added.

As a demonstration line connecting the central city of Chongqing with Bishan and Tongliang districts, the Bi Copper Line is 37 kilometers long, starting at Tongliang West Station and ending at Bishan Station.

After the completion of the Bi Copper Line, it will only take 45 minutes from Tongliang District to the central area of ​​Chongqing's main city, which can save about 1/3 of the time compared to other transportation methods.

"The Bi copper line project is a strong support for Chongqing to promote the construction of the Chengdu-Chongqing dual-city economic circle and build a major urban area on the track." Li Fangyu, party secretary and chairman of the Chongqing Communications Development Group, said that the line is to promote Chongqing An important measure for the integrated development of rail transit in the metropolitan area of ​​the main city and the creation of a "1 hour commuting circle".