His Highness Sheikh Mohammed bin Hamad bin Mohammed Al Sharqi, Crown Prince of Fujairah, stressed the importance of the role of Fujairah Ports as a global marine destination, due to its advanced infrastructure, capable of receiving ships, marine carriers and shipments of all sizes and categories. His Highness said, during his opening yesterday, the expansion of ports 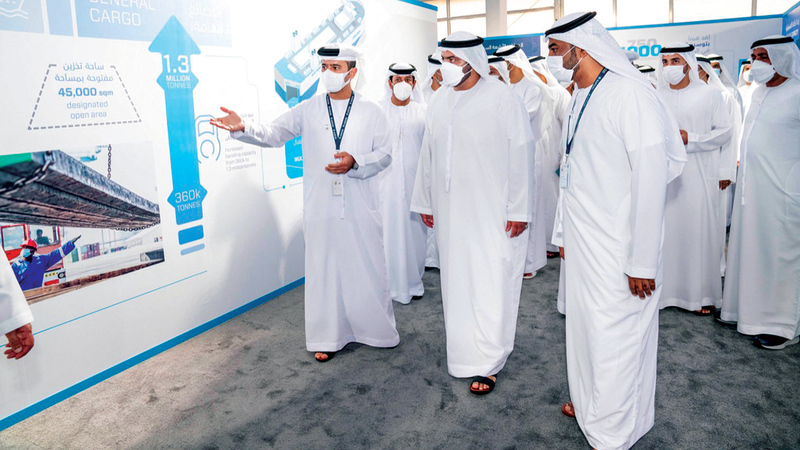 Mohammed bin Hamad Al Sharqi: The emirate is one of the important centers on the map of global maritime transport supply

The Crown Prince of Fujairah was briefed on the ongoing development work in the ports of Fujairah.

His Highness Sheikh Mohammed bin Hamad bin Mohammed Al Sharqi, Crown Prince of Fujairah, stressed the importance of the role of Fujairah Ports as a global maritime destination, due to its advanced infrastructure, capable of receiving ships, marine tankers and shipments of all sizes and categories.

His Highness said, during his inauguration yesterday, the expansion of Fujairah Ports, owned by Abu Dhabi Ports, which is investing in the development of the container terminal in the port of Fujairah, with an amount of one billion dirhams. It has become one of the main important centers on the global maritime transport supply map, due to its strategic geographical location, which helped it provide an encouraging climate for investment, in parallel with its role as a vital tributary in supporting the comprehensive development process in the country.

His Highness the Crown Prince of Fujairah, accompanied by Sheikh Maktoum bin Hamad Al Sharqi, Sheikh Mohammed bin Hamad bin Saif Al Sharqi, Director of e-Government in Fujairah, Minister of State for Foreign Trade, Dr. Thani bin Ahmed Al Zeyoudi, Chairman of the Department of Energy in Abu Dhabi, Eng. Owaidah Murshid Al Marar, and Secretary General The Executive Council of the Emirate of Abu Dhabi, Dr. Mohammed Rashid Ahmed Al Hamli, on the ongoing development work in the ports of Fujairah, including the construction of new facilities that included a new center for documents and customer happiness, additional areas for x-ray imaging and customs inspection, additional parking for trucks, and a new advanced engineering workshop with an area of ​​600 meters square, as well as a new semi-automated terminal gate complex, and a port operations command center.

In addition, the CEO of Fujairah Ports, Abdulaziz Mubarak Al Balushi, said in a virtual press conference, that "the main objective of the expansions is to enhance the food security of the UAE and enter the logistics sector," pointing to the consolidation of the port of Fujairah's position as a global and vital center for trade and services. logistics.

He stressed that Fujairah Ports, thanks to its strategic location, modern infrastructure, multimodal means of connectivity, and world-class service capabilities, is an ideal commercial and logistical gateway for companies looking to expand their operations globally, pointing out that the expansions support future growth and promote development. A number of emerging industries by building strategic partnerships, providing more updates supported by innovative infrastructure, and the best digital solutions.

He pointed out that a container yard has been allocated with an area of ​​110,000 square meters, in addition to an area equivalent to 25,000 square meters as a space designated for general multi-purpose goods, and for ro-ro cargo services, and an increase in the length of four berths in the port, and an increase in the water depth in the port from 12 to 15 meters. He pointed to long-term plans to bring the depth to 18 metres, which would allow Fujairah Port to receive larger ships with larger tonnages.

He revealed that the work of linking Fujairah Ports with the Etihad Rail network, which is scheduled to be completed in 2023, is proceeding according to the planned implementation schedule.

For his part, Head of the Ports Sector - Abu Dhabi Ports, Saif Al Mazrouei, said, “The expansion allowed to attract many refrigerated containers, as there are 240 refrigerated container points, compared to 20 points previously, in addition to the presence of refrigerated warehouse areas to support food security. He stressed that Fujairah Ports provides a set of incentives for customers, related to handling prices and storage fees, pointing out that these incentives depend on several factors, such as the nature of goods and storage period. Al Mazrouei stressed that Fujairah Ports are moving steadily towards becoming an engine for global trade and logistics, after new innovations and improvements to infrastructure, as they are the most important national assets that contribute to strengthening the economic, commercial and logistical capabilities of the state in the Middle East.He explained that "Fujairah Ports is the only multi-purpose marine facility located on the eastern coast of the country, and it is working to consolidate the emirate's position as a major center that contributes to facilitating the movement of regional and global trade, stressing that Fujairah Ports will play a major role, during the period before, in re-exporting." Due to its strategic location and ease of access to several regions, especially the Arabian Gulf, East Africa and India, as well as being linked to shipping lines that depend on general merchandise, and exports iron to all over the world.

Things are getting better globally

Head of the Ports Sector - "Abu Dhabi Ports", Saif Al Mazrouei, said that "(Abu Dhabi Ports) will continue to work during the coming period to increase the competitiveness of Fujairah ports, by exploring new opportunities that serve broader economic interests."

He added that "all sectors were affected by the repercussions of the (Corona) pandemic, but the impact was slight in the local ports, given their entry into the food security and logistics sector, and the transport of vaccines," stressing that conditions are improving globally, and there are signs of an active shipping movement, because the world is in need of Consumption of food and consumer goods, which is reflected on the port sector in general.

• Al Balushi: “Fujairah Ports is an ideal gateway for companies looking to expand their operations.”

• Al Mazrouei: “The expansion allowed to attract many refrigerated containers.”