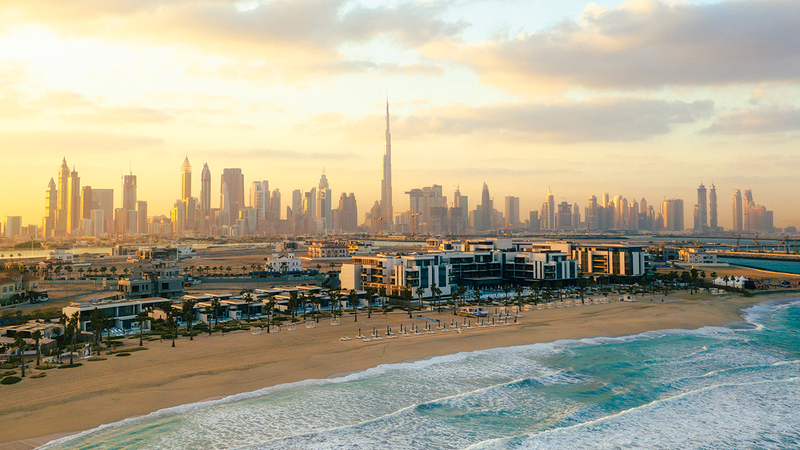 The department stated in a report, obtained by "Emirates Today", that the emirate will continue to strengthen its position as one of the best luxury hotel destinations in the world, as the number of five-star guest rooms is scheduled to increase from 44,000 to 48,200 by the year 2023.

In detail, the annual report issued by the Department of Tourism and Commerce Marketing (Dubai Tourism) stated that the tourism sector in the emirate showed remarkable resilience during 2020, despite the global challenges posed by the “Covid-19” pandemic in one of the most testing years for the travel industry so far. Globalism.

The report confirmed that Dubai continued to consolidate its position as one of the most popular leisure and business travel destinations in the world, as the hospitality and tourism sector in Dubai implemented a series of world-leading preventive measures designed to protect visitors to the city from the threat of the epidemic.

The report, which "Emirates Today" obtained a copy, stated that despite the travel restrictions that affected air passenger traffic flows last year, India, Saudi Arabia and the United Kingdom consolidated their positions as the top three source markets for visitors to Dubai, respectively in 2020, as they acquired Together they account for 30% of all visitors to the city.

The report pointed out that Dubai was also one of the main beneficiaries of the UAE's Local Tourism Strategy, the country's first ever unified domestic tourism initiative, which was launched in December 2020, and was spearheaded by the innovative marketing campaign for the World's Greatest Winter.

And he indicated that over the course of the campaign, which lasted 45 days, more than 950,000 residents of the UAE spent vacation throughout the country, which led to an increase of 17% in the occupancy rate of hotels across the country, while the average price reached 450 dirhams during the days of the campaign. .

The "Dubai Fence" report indicated that while the travel restrictions resulting from the "Covid-19" pandemic significantly limited the number of international visitors to Dubai in 2020, they had a significant and positive impact on Dubai, a destination for domestic tourism in the UAE, where The data showed that more than 3.5 million residents in the country spent vacation in Dubai between May and December 2020, an increase of 55%, compared to the same period in 2019.

The result was a comprehensive performance that showed why the hotel sector in Dubai is considered among the best in the world, especially when compared to other well-established destinations in Europe and Asia, through the analysis of key performance data provided by STR Corporation, a specialist in hotel research and consultancy, for the month of December 2020. It showed Dubai's superiority over London, Paris and Singapore in terms of its ability to mitigate the impact of "Covid-19", in average daily prices and revenue per available room on an annual basis.

For example, the average price of a hotel room in Dubai, during December 2020, decreased by only 15.4% year on year.

In comparison, Singapore suffered a decline of 48.3% over the same period.

The occupancy rate in Dubai reached 54% in December, far exceeding London and Paris, which recorded rates of 36.6% and 30.1%, respectively.

The Department of Tourism and Commercial Shopping had launched marketing campaigns in light of the pandemic in major international markets to ensure that the city continued to maintain its image as a preferred destination for travelers with the resumption of air traffic around the world.

Among those marketing campaigns are “Meet Soon”, as well as the newly launched “See you soon”, in addition to providing accurate information about the situation in Dubai through Dubai Tourism’s various digital platforms, as well as continuous communication with more than 3000 partners around the world. To be aware of the steps that Dubai has taken, finally, to return to tourism activity and open up the economy in all its sectors.

Dubai Tourism confirmed that looking into the future, Dubai's reputation as one of the best destinations in the world for luxury hotels is set to be enhanced, with the number of five-star guest rooms increasing from about 44,000 rooms to 48,200 by 2023. It represents a compound annual growth rate of 3.1%.

Five-star hotels account for 44.6% of the total hotel capacity expected to enter the Dubai hotel market, which amounts to about 9,465 rooms until 2023, compared to 18.8% for the category from one to three stars, with an expected increase in the total inventory of the latter. From 21,557 rooms last year, to 23,343 rooms in 2023, representing a compound annual growth rate of 2.7%.

Dubai's fast-growing inventory of serviced apartments and one- to three-star hotels had the highest average occupancy rates, across all accommodation categories last year, at 65% and 59%, respectively.

These results came despite the fact that they constituted about 20% and 17%, respectively, of the total stock of accommodation in the emirate last year.

• 44.6% of the total hotel capacity expected to enter Dubai is acquired by five-star hotels.