Suspicions about the illegality of the government's rescue of Plus Ultra are only increasing and the evidence is already in the hands of the European Commission. Citizens has revealed ... 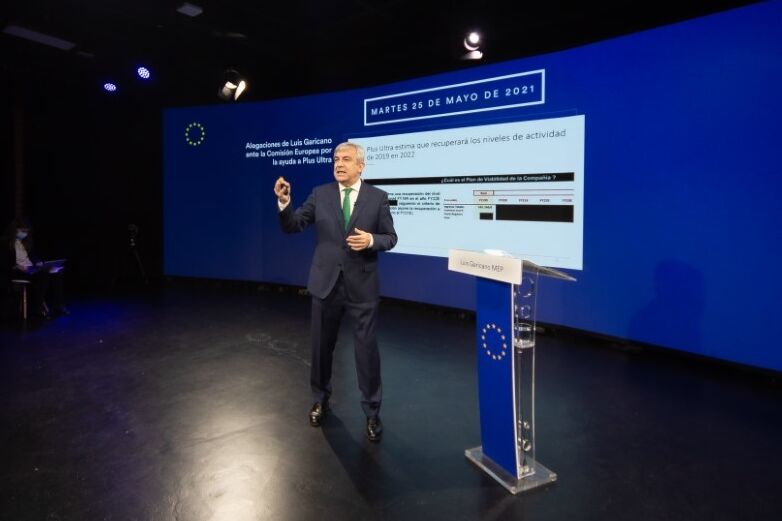 Suspicions about the illegality of the government's rescue of Plus Ultra are only increasing and the evidence is already in the hands of the European Commission. Ciudadanos has revealed new irregularities and maneuvers this Tuesday with which the airline would have obtained the controversial aid of 53 million euros. One of the most relevant is that it would have simulated a participatory loan from a company in Panama in order to hide from the Spanish authorities that it was a company in crisis long before the pandemic. Thanks to that, she was able to access the rescue when, in reality, she did not comply with one of the main requirements to be helped by the State.

This is one of the many irregularities described by the head of the European Citizens' delegation,

, in the allegations presented within the complaint that he has opened before the European Commission and after thoroughly studying the documentation provided by the Government to justify before Brussels the airline rescue.

This information presented by Madrid, as Garicano warns, instead of "eliminating" suspicions about the aid, what it has done has been to "reinforce" the thesis that it was "illegal aid."

"In Plus Ultra we see a very suspicious plot doing totally unacceptable accounting tricks to get help and the Government looking the other way and jumping the limits," said the Cs MEP at a press conference where he presented these allegations.

Therefore, in addition to ensuring that the European Commission has "sufficient" elements to investigate, it has demanded an immediate explanation from the Prime Minister and the Ministers of Transport, Economy and Finance given the seriousness of the matter.

While waiting for them to do so, Ciudadanos corners the Government in its complaint to Brussels, emphasizing the "numerous indications" presented and the reasonable doubts about the viability of the company and that it return the 53 million. These signs can be grouped into five points.

The most innovative has to do with Plus Ultra's "accounting maneuver" with which it gave the appearance of not being a "company in crisis" before the Government. And that would have passed the filters without being detected. Garicano has revealed that he received a "simulated" participative loan of 6.3 million euros from the

, based in the tax haven of Panama, but that the reality is that four of those millions never reached the account of the airline because they were left as a security deposit. That is, they were "unavailable" for use.

Garicano has explained that this total amount of 6.3 million was used to justify that Plus Ultra was not in losses before the pandemic, when most of that money had not even left Panama.

According to the Temporary Framework under which the European Union authorized Spain to give aid to strategic companies, it is prohibited to grant aid to companies that have lost "more than half of their capital stock" as a result of accumulated losses.

Well, that is something that, in Garicano's opinion, happened with Plus Ultra.

"It is neither viable nor will it return the money"

At another point, the Citizens MEP dismounts that Plus Ultra is a "strategic" company for Spain. Something that is an essential aspect to settle the rescue since, according to a recent ruling of the General Court of the European Union, of May 19, 2021, state aid can only be given to companies that play an essential role in their economy. Well, with four leased aircraft, Plus Ultra represents a "tiny" market share of 0.1%, which is also minimal when compared to the total number of flights to Latin America or the routes it operates. "It is not systemic or essential," says Garicano, who stresses that the Spanish authorities acknowledge to the European Commission that the disappearance of Plus Ultra would be replaced by other companies.

Another of the main points of Garicano's allegations is that the airline "is not viable" and that the 53 million in aid are impossible to recover.

"To defend viability they have been forced to make heroic and not very credible assumptions that contrast with regional and sectoral economic forecasts," he says in his writing.

On the other hand, the head of the European Citizens' delegation emphasizes that the aid of 53 million is "manifestly disproportionate".

"It is almost seven times the total debt," he denounced.

Finally, Garicano places the owners of Plus Ultra in what he has called the "Venezuelan plot."

Two of them are being investigated for money laundering, among them, its president, Rodolfo Reyes, immersed in a case of corruption with the distribution of food bags in Venezuela.

EmpresasManos Limpias asks the Court of Accounts to audit SEPI after the Plus Ultra case: "It could be the tip of the iceberg"