Sino-Singapore Jingwei Client, May 16th. Because the endorsement brand Chazhilan is involved in illegal crimes, Ma Yili Studio issued a statement on the 15th that Ma Yili had terminated the contract with the brand. Later, Ma Yili reposted the Weibo, saying, "Apologize to all franchisee victims. We are currently actively cooperating with the police investigation."   Screenshot source: Sina Weibo 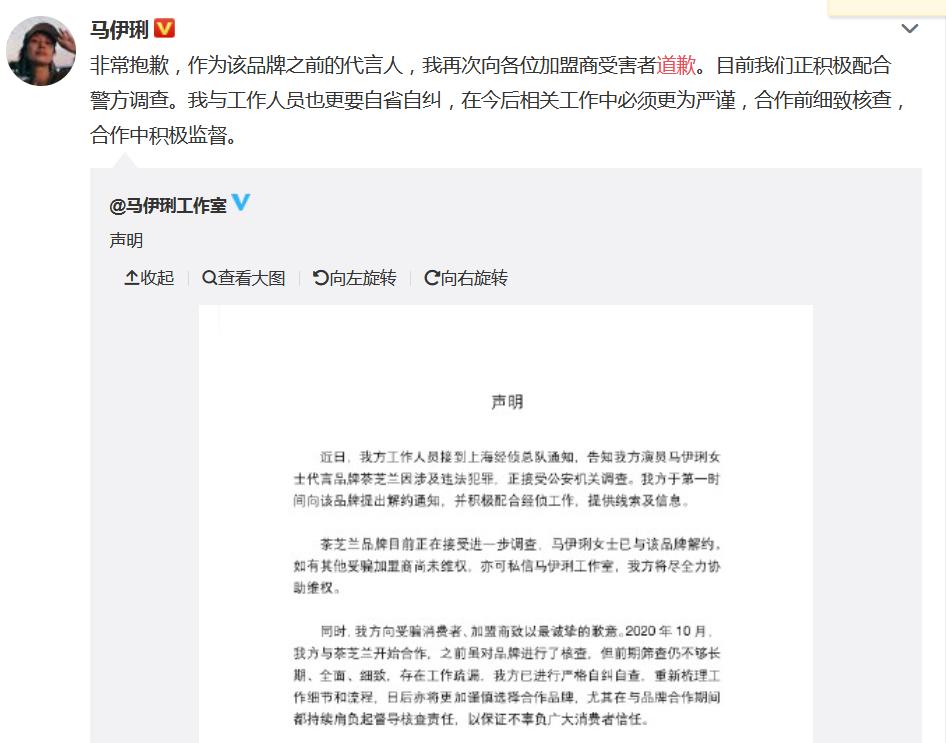 Sino-Singapore Jingwei Client, May 16th. Because the endorsement brand Chazhilan is involved in illegal crimes, Ma Yili Studio issued a statement on the 15th that Ma Yili had terminated the contract with the brand.

Later, Ma Yili reposted the Weibo, saying, "Apologize to all franchisee victims. We are currently actively cooperating with the police investigation."

Ma Yili Studio stated that recently, our staff received a notice from the Shanghai Economic Investigation Corps that our actor Ma Yili’s endorsement of the brand Cha Zhilan was being investigated by the public security agency due to violations of laws and crimes.

We submitted the termination notice to the brand as soon as possible, and actively cooperated with the investigation work to provide clues and information.

Ms. Ma Yili has terminated the contract with the brand.

If there are other defrauded franchisees who have not yet defended their rights, they can also privately write to Ma Yili Studio, and

we will do our best to help defend their rights.

Ma Yili Studio also said that I would like to extend my sincerest apologies to the deceived consumers and franchisees.

In October 2020, our side and Chazhilan began to cooperate. Although the brand was checked before, the preliminary screening was not long-term, comprehensive, and detailed, and there were work omissions. We have carried out strict self-correction and self-examination, and reorganized the work. For details and procedures, we will be more cautious in choosing cooperation brands in the future, especially during the period of cooperation with brands, we will continue to shoulder the responsibility of supervision and inspection to ensure that the trust of consumers will not be disappointed.

Later, Ma Yili forwarded a statement from the studio, “I’m very sorry, as the previous spokesperson of the brand, I once again apologize to the victims of franchisees. We are currently actively cooperating with the police investigation. I and the staff should also self-examine and correct themselves. In the future, relevant work must be more rigorous, careful inspection before cooperation, and active supervision during cooperation."

On May 13, the Shanghai Municipal Public Security Bureau held a press conference and mentioned that in March this year, an overall study and judgment on the "abnormal closure" of franchised milk tea shops was carried out, and it successfully detected the first case

According to the information provided by the Shanghai Municipal Public Security Bureau, the above-mentioned fraud cases

According to information provided by the WeChat account "Chazhilan Headquarters",

Ma Yili used to be the spokesperson of the Chazhilan brand.

Ye Yiqian is the spokesperson of the brand image of Hua Dian Dian.

As of press time, Ye Yiqian could not find related content of "Huadiandian" on Weibo, and has not yet responded to this matter.

According to the official WeChat account of the Shanghai Public Security Bureau, in December 2020, relying on data analysis, the Shanghai police found that a large number of milk tea shops franchised businesses are at risk of "abnormal closure" and may be suspected of economic crimes.

After investigation, the criminal suspects such as Jin and Wang set up a catering company for illegal gains, and set up multiple departments such as the network department, the telephone department, the commerce department, and the operation department within the company. They were not authorized by the right company. If permitted, build a number of false well-known brands of milk tea merchants and franchise websites, design and publish business advertisements with the words "brand franchise" to attract and obtain contact information for potential franchisees.

Subsequently, the acquisition or registration of more than 50 milk tea brands such as "Huadiandian" and "Chazhilan", through the design of "famous brand products", "full one-stop service", "big data scientific site selection", and "investment and joining" Wait for publicity, arrange the operator to promote the franchise business.

the professional training instructors claimed by the company to the outside world have no experience in the milk tea industry, and the various services are nonsense.

The Shanghai Municipal Public Security Bureau stated that in order to further gain the trust of franchisees, the suspects also forged authorization documents for multiple brands, and designed and printed a large number of promotional materials.

Even during field visits to franchisees, the

criminal gang hired people to pretend to be consumers at a price ranging from 40 to 80 yuan per person per day. They queued up in front of the milk tea shop to create the illusion

. To defraud the trust of franchisees.

The Shanghai Municipal Public Security Bureau stated that at present, more than 90 suspects have been criminally enforced by the police for being suspected of contract fraud, and the case is under further investigation.