China News Service, May 15th (Reporter Chen Jing) The anti-epidemic "artifact" critical ultrasound for more patients in the front line of emergency and critical care; a medical hydrogen-oxygen atomizer used to assist in the treatment of new coronary pneumonia …… On the 15th, at the 84th China International Medical Equipment Fair (CMEF) that is being held here, more than 2,000 domestic and foreig 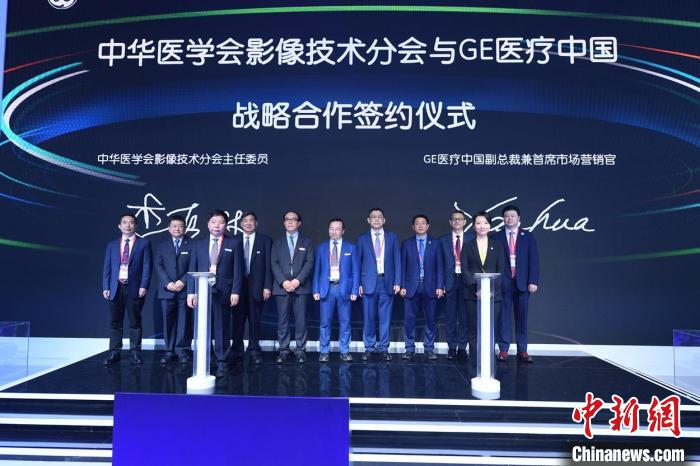 China News Service, May 15th (Reporter Chen Jing) The anti-epidemic "artifact" critical ultrasound for more patients in the front line of emergency and critical care; a medical hydrogen-oxygen atomizer used to assist in the treatment of new coronary pneumonia …… On the 15th, at the 84th China International Medical Equipment Fair (CMEF) that is being held here, more than 2,000 domestic and foreign companies have displayed their high-tech "weapons" one after another.

"Medical weapons" that play an important role in the fight against new coronary pneumonia are competing to appear.

At the same time, innovative products that incorporate new technologies are also focused on showing their style.

A vehicle-mounted imaging center model that combines peacetime and wartime on the booth of Shanghai United Imaging Medical Technology Co., Ltd. attracted a lot of attention.

According to reports, the Long March vehicle-mounted mobile imaging center in the real scene is about 17 meters long and weighs 28 tons. It has moved key medical imaging equipment such as smart CT, mobile DR, and breast machine to the same vehicle.

The intelligent image cloud platform mounted on the vehicle can realize the real-time collection, management, storage and sharing of images, equipment, vehicles and other information, turning the "image center" into a mobile resource that can be moved flexibly. First-line mobilization to improve the capabilities of primary-level imaging examinations; it can be used for primary-level physical examinations, breast and cervical cancer screenings, and tumor patient follow-up inspections, effectively supplementing the shortcomings of insufficient resources of primary medical and public health services.

At this exhibition, United Imaging Group released the "China Chip" dedicated to high-end medical imaging. The "China Chip", which has been developed and put into mass production for two and a half years, fills the gap in the field of self-developed chips for high-end medical imaging equipment in China. And achieved international leadership in key technical indicators.

At the GE Healthcare booth, the reporter saw the Venue, a special ultrasound system for acute and severe cases that played an important role in the treatment of the new crown epidemic.

According to Peng Zhiyong, director of the Department of Critical Care Medicine of Zhongnan Hospital of Wuhan University, said in an interview, ultrasound, a medical monitoring device, is like the "eyes" of critical care medicine doctors. Doctors rely on ultrasound to make correct diagnosis and treatment decisions at any time and save lives.

Obviously, the equipment of the traditional ultrasound department cannot meet the demand of the critical medicine department.

High-tech products such as Venue, a special ultrasound system for acute and severe cases, which played an important role in the treatment of the new crown epidemic, were unveiled.

Cai Shuhan, the medical director of the Second Ward of the Department of Critical Care Medicine of Zhongnan Hospital of Wuhan University and the head of the ECMO team, tried to use Venue to assist ECMO. Using Venue's accurate monitoring data, he judged whether to use ECMO and what mode... The equipment complemented each other.

During the interview, the reporter learned that in the post-epidemic era, many hospitals in Hubei Province have introduced critical ultrasound equipment.

In addition to Venue, the GE Healthcare booth also exhibited Venue Go, which can achieve multi-scenarios and rapid diagnosis and treatment in clinical emergency situations.

On-site staff told reporters that Venue Go can not only be equipped on a trolley, but also can be placed on a desktop or hanging on a wall. It is more adaptable to a consultation room with limited space.

It is understood that during the exhibition, GE Healthcare signed a three-year strategic cooperation agreement with the Imaging Technology Branch of the Chinese Medical Association.

The two parties will start from the most urgent current situation and needs, and use the experience and accumulation of digital empowerment of enterprises to promote the development of imaging technology from the aspects of "people" and "quality control".

In the exhibition hall, the reporter saw numerous ventilators and oxygen machines exhibits.

The hydrogen and oxygen atomizer used to assist the treatment of new coronary pneumonia has attracted the attention of many audiences.

The staff told reporters that the mixed gas of hydrogen and oxygen can not only supplement oxygen for patients with new coronary pneumonia, but also improve the "work efficiency" of oxygen, helping patients to increase oxygen saturation and avoid hypoxia.

The hydrogen-oxygen atomizer continuously produces hydrogen-oxygen mixed gas through the electrolysis of natural water molecules, which can ensure the patient's "high-efficiency" oxygen inhalation.

Shanghai Ruomei Medical Company told reporters that the hydrogen-oxygen atomizer relies on zero-cavity technology to avoid the risk of flammability and explosion of the hydrogen-oxygen mixture. The hydrogen-oxygen mixture is continuously produced through the electrolysis of natural water molecules, as long as the water source and With sufficient electricity, there is no need to buy oxygen cylinders everywhere, which can ensure patients' "high efficiency" oxygen inhalation and reduce the number of patients who die due to lack of oxygen.

Researchers such as Zhong Nanshan, academician of the Chinese Academy of Engineering, launched a multi-center, open-label trial called "Hydrogen and oxygen mixed gas inhalation for improving the severity of disease and breathing difficulties in patients with new coronary pneumonia".

The study found that: the study group had significant differences on the second day, the third day and the last treatment of the hydrogen and oxygen mixed gas treatment.