From the "May 1st" holiday to the Consumer Fair: full consumption firepower demonstrates the charm of the Chinese market

(The first Consumer Expo) From the "May 1st" holiday to the Consumer Expo: Full consumption firepower to demonstrate the charm of the Chinese market   China News Service, Haikou, May 10 (Reporter Li Xiaoyu) The 10th China International Consumer Goods Expo was closed. From the explosive growth of consumption during the "May 1st" holiday to the "super orders" won by exhibitors from many countries a 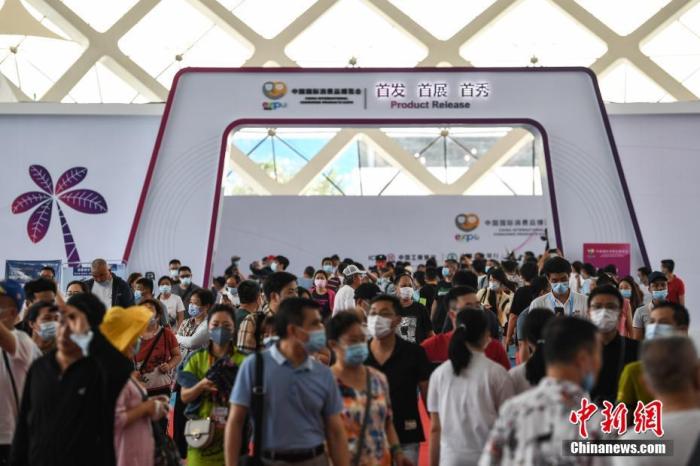 (The first Consumer Expo) From the "May 1st" holiday to the Consumer Expo: Full consumption firepower to demonstrate the charm of the Chinese market

From the explosive growth of consumption during the "May 1st" holiday to the "super orders" won by exhibitors from many countries at the Consumer Fair, the strong "magnetism" and potential of the Chinese market is eye-catching.

Consumption was once the “severely-hit area” in China that was hit hardest by the epidemic, and the recovery progress is not small compared with investment and exports.

However, since the beginning of this year, as the economy has continued to stabilize and improve, and residents' income has increased, China's consumption recovery has clearly strengthened.

On May 10, Haikou City, Hainan Province, the first Consumer Expo began to open to the public.

The picture shows people walking into the login hall of the Consumer Fair.

Following the high growth of 33.9% in the total retail sales of consumer goods in the first quarter, the consumer enthusiasm of the people during the May 1st holiday this year has risen again: online shopping has been unprecedentedly popular, and the national postal express industry collection and delivery volume have both increased by more than 90% over 2019 ; 230 million people are "on the road", surpassing the scale before the epidemic, and domestic tourism and catering consumption has become popular across the board; movie box offices are booming, and the number of movie viewers has surged.

Some analysts said that a series of consumption data that broke the record since the epidemic fully shows that "this country has returned to normal" and that the market's accelerated recovery is overwhelming.

If the surge in holiday consumption reflects the endogenous power and vitality of the Chinese market, the huge "throughput" for global high-quality goods and services reflects the charm of this huge market.

For example, the signing of a contract for the purchase of the first yacht enjoying the "zero tariff" policy will reduce the value-added tax and consumption tax of nearly 4 million yuan for customers; COFCO Food Imports has signed contracts for 140 million yuan with enterprises in the United States, Germany and other countries. The products involve Wagyu, pure milk, fruit juice, etc.

With the epidemic in China under effective control and the progress of economic recovery leading the world, many foreign-funded enterprises are trying every means to compete for access to the Chinese market or more advantageous positions.

The person in charge of an Irish whiskey brand said that half of the company’s turnover comes from the Chinese market and hopes to take advantage of the Consumer Expo to further strengthen cooperation with agents; Fosun International Group will participate in the exhibition with several high-end brands such as Damiani and LANVIN; French luxury goods The giant Moët Hennessy-Louis Vuitton Group has played the "local brand" and displayed wines made from grapes produced in China.

During the Consumer Expo, many international big names held a total of 81 debut events. Hundreds of new products and boutiques were unveiled, involving dozens of categories such as apparel and luggage, beauty products, food, wine, and jewelry.

This shows the importance of capturing the Chinese market in the global strategy of foreign companies.

As the world's second-largest economy, China's market is strong and remains open not only to benefit the country, but also to provide numerous business opportunities for companies from all over the world, which will inject strong impetus into the global economy to accelerate the emergence of the shadow of the epidemic.

Cai Fang, former vice president of the Chinese Academy of Social Sciences, said that compared with China's population in the world's population, China's final consumption expenditure currently accounts for a low proportion of the world's total.

Cai Fang said that, driven by the mega market, China’s closeness with the world economy is expected to be further strengthened, which will provide other countries with broader market opportunities, enable the full circulation of domestic and foreign commodities and factor resources, and create more. value.

It is worth noting that China has recently adopted a series of measures such as issuing coupons and holding shopping festivals to boost consumption and expand domestic demand.

According to the official plan, more long-term and short-term policy measures will be adopted in the future to promote the formation of a strong domestic market, including adjusting the auto purchase restriction policy, fostering the construction of international consumer centers, upgrading and upgrading pedestrian streets, and accelerating the development of the digital economy.

It is reasonable to expect that with the implementation of a number of measures, the Chinese market will show stronger "magnetism".