The data center for integrated solutions "Moro" of "Dewa Digital", the digital arm of the Dubai Electricity and Water Authority, concluded a cooperation agreement with the global company "Huawei", to establish the largest solar-powered data center with a certificate of "Tier-III" and certified by the institute " UpTime », in the area 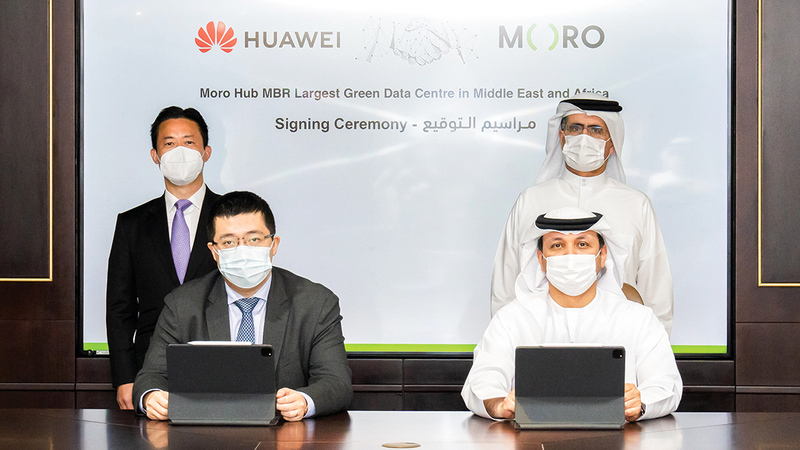 The data center for integrated solutions "Moro" of "Dewa Digital", the digital arm of the Dubai Electricity and Water Authority, concluded a cooperation agreement with the global company "Huawei", to establish the largest solar-powered data center with a certificate of "Tier-III" and certified by the institute " Up Time », in the Middle East and Africa region, at the Mohammed bin Rashid Al Maktoum Solar Park.

The sustainable, carbon-neutral building relies on solar energy by 100%, with a capacity exceeding 100 megawatts, and is the second green data center launched by Moro, relying on solar energy in Dubai.

The agreement was signed by Eng. Marwan Bin Haider, Vice Chairman and CEO of "Dewa Digital Group", and CEO of "Huawei" in the UAE, Jiwai Law, in the presence of the Managing Director and CEO of DEWA, ​​Saeed Mohammed Al Tayer, and Chairman Huawei in the Middle East, Charles Yang.

The city of the future

Al Tayer said that the sustainable data center contributes to the realization of the 'Dubai 10X' initiative launched by His Highness Sheikh Mohammed bin Rashid Al Maktoum, Vice President and Prime Minister of the UAE and Ruler of Dubai, to make Dubai the city of the future, by implementing what the world’s cities will implement after 10 years. It also keeps pace with our aspirations in the process of sustainable digital transformation, foreseeing and creating the future, in order to achieve the goals of the UAE Centennial 2071 to make the UAE the best country in the world, and the 17 sustainable development goals adopted by the United Nations for 2030.

He added: “The Carbon Neutral Center supports Dubai’s march to exceed the target set in the carbon emissions reduction strategy, which aims to reduce emissions by 16% by 2021, as the emirate succeeded in reducing Dubai’s carbon emissions by 22% in 2019, that is, two years ago. From the specified date ».

He emphasized that the center strengthens the position of "Moro", a subsidiary of the "Digital Dewa" group, which also includes "Infra X" and "Digital X", as a major contributor to the circular economy of the UAE. It also supports the efforts of the Dubai Electricity and Water Authority in promoting the march of sustainable development.

Al Tayer added: “The center will provide digital products and services based on the latest technologies of the fourth industrial revolution, such as cloud services, the Internet of things, and artificial intelligence, and based on the fact that the new green data center is the largest in the Middle East and Africa, it will provide global companies specializing in supercomputing. Achieving a computing free of carbon emissions, and it will also help customers to implement their own sustainability initiatives, and reduce the carbon emissions of their institutions to the limits of neutrality. ”

In the same context, Mustafa Looney, First Vice President at the Uptime Institute for the Middle East, Africa and Greater India, praised the tireless efforts made by the UAE government to accelerate the adoption of the next generation of infrastructure to serve its citizens and institutions, adding: “We are proud to establish the largest ever data center. Tier-III certified, and approved by the (Up Time) institute in the region, and we are confident that this new edifice will support sustainable economic growth in the UAE for years to come. ”

The President of Huawei in the Middle East, Charles Yang, said that this important cooperation would consolidate the bonds of partnership with Moro, in addition to providing an opportunity to support the sustainable development goals of the UAE.

He added, "In light of the significant growth witnessed by the renewable energy sector, we are confident that this agreement will strengthen our endeavors to implement and establish carbon neutral digital technologies."

• The building is sustainable and carbon neutral, and relies on 100% solar energy.