New experiences and new scenes drive a new upsurge of domestic cultural tourism consumption CCTV News: Did everyone have a good time during the five-day holiday? Buy, buy, buy, enjoy it? Let's sort it out through big data. The enthusiasm for tourism is soaring   During the "May 1st" period this year, air tickets, train tickets, hotel reservations and other spending were hot. Big data shows that 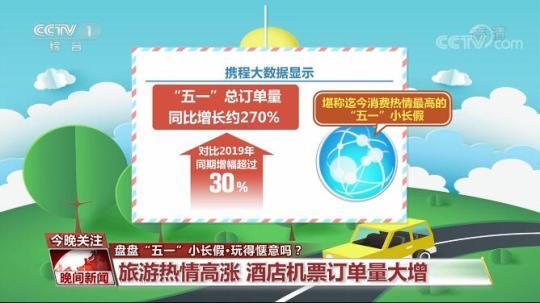 Did everyone have a good time during the five-day holiday?

Let's sort it out through big data.

The enthusiasm for tourism is soaring

During the "May 1st" period this year, air tickets, train tickets, hotel reservations and other spending were hot.

Big data shows that the total order volume of the "May 1st" increased by about 270% year-on-year, compared with an increase of more than 30% in the same period in 2019, which can be called the "May 1st" small holiday with the highest consumer enthusiasm so far.

"Guofeng B&B" is sought after, Sanxingdui successfully "out of the circle"

This "May 1st" holiday, "post-95" young people have gradually become the main travel force. In addition to focusing on the freshness and peculiarities of their holiday destinations, they also favor Chinese culture more and more.

The Sanxingdui site, where the celebrity checked in, received more than 60,000 tourists in the first three days, far exceeding the same period in 2019; the new Internet celebrity bronze mask "baby head" ice cream has sparked a spark between the ancient and the modern.

In Ningbo, Zhejiang, on the last day of the "May Day" holiday, the 2021 China (Ningbo) Grand Canal International Piano Art Festival kicked off.

The main venue of Ningbo and the branch venues of Hangzhou, Huzhou, Jiaxing and other venues that the Grand Canal flows through, the ten places combined to perform "No Communist Party, No New China" and "Sing a Folk Song for the Party" to compose a magnificent movement.

In addition, there was a piano performance "City of Philharmonic" brought by three generations of piano performers from Ningbo, and 50 old party members and 50 young pioneers sang the song together.

The Winter Olympics is approaching, and people's enthusiasm for ice and snow is also released.

The first Beijing Ice Hockey Open, held from the 1st to the 5th, attracted more than 1,000 ice hockey players from 71 teams from all over the country to participate, and presented a rare ice and snow sports feast for the citizens of the capital.

On the occasion of the 100th anniversary of the founding of the party, the attention of red tourist routes has also increased.

This holiday, the movie market is also very hot.

According to the latest data from the National Film Administration, as of 17:00 on May 5, the box office of the "51st Gear" reached 1.603 billion yuan, breaking the historical record for the same period.

Thirteen films including "Above the Cliff", "Sweeping Darkness: Final Battle", and "Your Wedding" were selected to be released in this period, and the box office share of domestic films and the audience's reputation increased significantly.

The popularity of brick-and-mortar business circles is picking up, and online consumption remains strong

During the "May 1st" holiday, various regions provide more high-quality and fresh choices for online and offline consumption, and the consumer market is warm and welcoming.

24 hours after the launch of the "2021 National Consumption Promotion Month", the cumulative consumption of the Shanghai May 5th Shopping Festival alone has reached 17.3 billion yuan.

In Shenzhen, a number of business districts have launched a new model of "get first, pay later", which effectively boosted passenger flow by more than 30%, and turnover increased by about 40%.

According to the latest data from China UnionPay, 4 days before the May 1st holiday in 2021, the transaction value of UnionPay network reached 1.5 trillion yuan, an increase of 5.3% over the same period last year and the highest value in the same period in history.