The quarterly report of 27 provinces is released: Guangdong, Su Chao, and 8 provinces lead the growth rate of 2.5 trillion 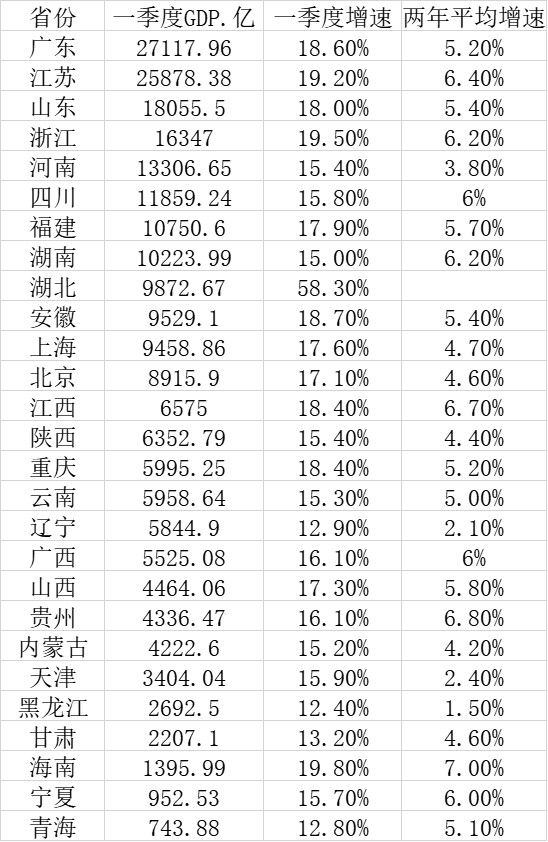 The quarterly report of 27 provinces is released: Guangdong and Jiangsu exceed 2.5 trillion yuan, and 8 provinces including Eqiong and Qiong lead the growth rate

After the National Bureau of Statistics released the economic data for the first quarter, all localities also released their own "quarterly reports."

According to the statistics of China Business News, as of now, 27 provinces have announced the "Quarterly Report."

From the two-year average growth rate, Hainan leads the announced provinces, and the provinces with low growth rates are mainly concentrated in North China and Northeast China.

According to data released by the Guangdong Provincial Bureau of Statistics, the GDP of Guangdong in the first quarter of 2021 was 2,711,796 million yuan, a year-on-year increase of 18.6%, and an average growth of 5.2% in two years.

Peng Peng, executive chairman of the Guangdong Institutional Reform Research Association, analyzed to a reporter from China Business News that this year’s Spring Festival will celebrate the Chinese New Year in situ, which is a big plus for a province like Guangdong, because construction will start earlier after the holiday.

When the start of work is guaranteed, there must also be an order.

As the largest province in foreign trade, Guangdong's export orders in the first quarter were also very good.

Data show that in the first quarter, Guangdong’s total import and export of goods was 18.26.31 billion yuan, a year-on-year increase of 33.4%, and an average increase of 8.5% over the two years.

Luo Xiaohua, president of the export company and Guangdong Meijie Group, told China Business News that the company mainly exports to the North American market. There were a lot of orders in the first quarter of this year, and workers returned to work in a timely manner, so they were generally busy.

However, as the exchange rate changes and the prices of raw materials rise, business operations are also facing greater pressure.

In the first quarter of 2021, Jiangsu, the second largest economic province, achieved a GDP of 2.5878.838 billion yuan, a year-on-year increase of 19.2%, and an average growth rate of 6.4% in two years. The growth rate is much higher than that of Guangdong.

From the perspective of tertiary industries, the development of Jiangsu's industrial manufacturing industry is very prominent.

Data show that in the first quarter, the value added of the industrial enterprises above designated size in Jiangsu Province increased by 33.6% year-on-year, and the two-year average growth rate was 11%.

In terms of industries, 38 of the 40 major industrial sectors in the province have achieved growth in added value, with an increase of 95%.

The added value of the equipment manufacturing industry increased by 43.2%, which was 9.6 percentage points higher than the average level of the province’s designated industries.

The third-largest economic province, Shandong's GDP in the first quarter reached 1805.5 billion yuan, which is far from the top two in Guangdong and the Soviet Union.

It is worth noting that, like Jiangsu, Zhejiang's industrial growth rate is relatively fast.

Statistics show that in the first quarter, the added value of industrial enterprises above designated size was 440.3 billion yuan, a year-on-year increase of 34.1%, and an average growth of 9.7% over the two years.

It is worth noting that the two-year average growth rate of Jiangsu and Zhejiang is relatively high, reaching 6.4% and 6.2%. With a relatively large base, the growth rate is still among the best.

In addition to these four major economic provinces, Henan, Sichuan, Fujian, and Hunan each exceeded 1 trillion yuan in GDP in the first quarter, ranking fifth to eighth.

Hubei grew by 58.3%, Hainan had the highest average growth rate in two years

From the perspective of GDP growth, Hubei, which was most affected by the epidemic in the first quarter of last year, rebounded sharply this year, ranking first.

Data from the Hubei Bureau of Statistics show that in the first quarter of 2021, the province's regional GDP was 987.267 billion yuan, an increase of 58.3% over the same period of the previous year.

Data show that in the first quarter, the value added of industries above designated size in Hubei increased by 96.0% year-on-year and 6.2% year-on-year, with an average growth rate of 3.1% over the two years.

In terms of industry categories, the added value of high-tech manufacturing increased by 129.0%, a growth rate of 33.0 percentage points higher than that of regulated industries.

Including Hubei, 8 of the 27 provinces are above the national level of 18.3%, namely Hubei, Hainan, Zhejiang, Jiangsu, Anhui, Guangdong, Jiangxi and Chongqing.

At present, among the 27 provinces, except Hubei, all the other provinces have announced the two-year average GDP growth rate.

From the two-year average growth rate, 9 of the 27 provinces have reached or exceeded 6%. Among them, Hainan, Guizhou and Jiangxi are among the top three.

Associate Professor Ding Changfa of the Department of Economics of Xiamen University analyzed the rapid economic growth of Hainan, mainly due to the central government's support for the establishment of a free trade pilot zone on the entire island of Hainan in recent years, and support for Hainan to gradually explore and steadily promote the construction of a free trade port with Chinese characteristics.

With the support of various policies, Hainan has many landed projects and its development is particularly fast.

Data show that in the first quarter, the added value of the service industry in Hainan Province increased by 25.5% year-on-year, contributing 78.9% to the overall economic growth.

The construction of a free trade port promotes the rapid development of new business formats.

The rapid growth in Guizhou and Jiangxi has continued the rapid development trend in the upper and middle reaches of the Yangtze River in recent years.

Taking Jiangxi as an example, Ding Changfa said that Jiangxi is adjacent to the Yangtze River Delta, the Pearl River Delta and Fujian. Over the past few years, the business environment has been greatly improved, and hardware facilities such as high-speed rail and highways have also been continuously improved.

Jiangxi has made full use of the advantages of low land prices and abundant labor force, attracting many industries that are sensitive to land and labor prices in Guangdong, the Yangtze River Delta, Fujian and other places.

In contrast, among the 27 provinces, the five provinces with the lowest two-year average growth rate are Heilongjiang, Liaoning, Tianjin, Henan and Inner Mongolia, mainly from the Northeast and North China. Among these provinces, the energy-heavy provinces are the main ones. In recent years, the downward pressure has been greater.

Yi Baozhong, a professor at the Northeast Asian Research Institute of Jilin University, analyzed to a reporter from China Business News that in Northeast China, the industrial structure is relatively simple, with basic industrial sectors, especially energy and raw materials, and basic machinery industries as the main sector. There are few terminal products and many basic industries appear. Phenomenon of stagnation and even decline in development.

At the same time, the development of high-tech enterprises and private economy in Northeast China is lagging behind.

This structure, which is dominated by heavy and chemical industries and has a particularly high proportion of state-owned enterprises, is now largely restricting the development of the Northeast.

Table: GDP of 27 provinces in the first quarter (data source: CBN reporters statistics based on public data from various regions)