A field tour by "Emirates Today" to a number of outlets in Dubai and Sharjah, on the evening of the day before yesterday (Ramadan night), showed an increased demand for the purchase of the requirements of the fasting month of various commodities, especially food, which led to congestion in front of the outlets while adhering to the procedures. Precautionary 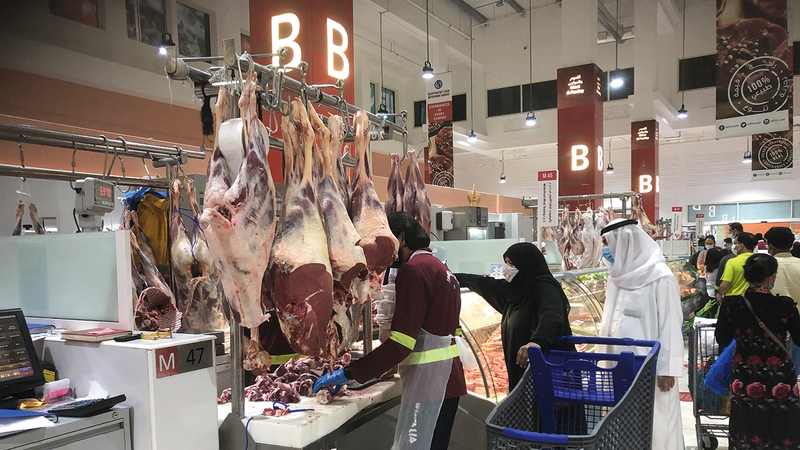 The largest demand is focused on food commodities, especially meat and poultry.

A field tour by "Emirates Today" to a number of outlets in Dubai and Sharjah, on the evening of the day before yesterday (Ramadan night), showed an increased demand for the purchase of the requirements of the fasting month of various commodities, especially food, which led to congestion in front of the outlets while adhering to the procedures. Precautionary.

Consumers told "Emirates Today" that the increased demand has led to some sales shelves being temporarily empty of products.

For their part, sales outlet officials stressed the tightening of precautionary measures with speed by providing shelves with missing goods, especially display items, pointing out that sales on the night of Ramadan witnessed an increase of 40% compared to the previous days.

In detail, consumer Hassan Adel said that while he was going with his family to one of the outlets in Dubai yesterday evening, he noticed a large turnout and queues for payment boxes, but at the same time he indicated adherence to precautionary measures such as social distancing and wearing masks.

He added that some of the sales shelves in the outlet were empty of products, especially those on which papers were presented with the increasing demand for them.

For his part, consumer Ibrahim Ahmed said that he prefers to shop for Ramadan supplies on the night of the announcement of the beginning of the month, as "a habit that brings joy to the family, especially in light of pandemic conditions."

And that the increase in demand has resulted in some outlets being free of certain commodities for temporary periods, especially those that are experiencing discounts such as long-life milk products.

The consumer, Sameh Abdul-Karim, stated that he prefers to purchase the supplies of the first week of the holy month on the night of Ramadan, indicating that he noticed a temporary vacancy of some shelves of types of vegetables and some food offer goods and bread.

In turn, the General Director of the Emirates Cooperative Society, Muhammad Yusuf Al-Khaja, said that the night of Ramadan witnessed high rates of consumer turnout, especially for food offer commodities, which led to an increase in sales compared to the previous days by between 30 and 40%.

He added that the association stressed the precautionary safety measures during periods of increased demand with the implementation of preparedness plans to supply the shelves continuously to avoid not being empty of products.

He pointed out that the shelves in some outlets may be devoid of certain products due to the great demand for them and the delay in delivery from the supply companies to the outlets and warehouses.

For his part, the spokesperson for the centers of the "Aswaaq" group, affiliated with the Dubai Government Investments Corporation, Abdul Hamid Al-Khashabi, agreed with Al Khaja that the increase in the demand for outlets during the night of Ramadan contributed to raising sales by up to 40% compared to previous regular periods.

He indicated that the greatest demand focused on a number of food commodities, especially fresh ones such as vegetables, poultry and meat, in addition to Ramadan drinks and dairy products.

In the same context, the Director of Marketing and Happiness Department at Union Coop, Dr. Suhail Al-Bastaki, stated that the night of Ramadan witnessed rates of consumer turnout and congestion, with a commitment to apply precautionary measures, pointing to the increased demand for outlets at rates that exceeded 40% compared to previous days, which was reflected. Positive sales.

Al-Bastaki indicated that some shelves were empty of goods under the pressure of demand, but he stressed that this was temporary, especially from the most sought-after products such as papers and bread.

He said that the cooperative has designated work teams to follow up the shelves and report any shortages immediately to re-supply them with products.

The Director of Community Relations and Public Relations at the Sharjah Cooperative, Faisal Khalid Al Naboodah, considered that the increase in turnout and crowding during the night of Ramadan does not prevent the strict application of precautionary measures, indicating that sales witnessed a significant increase the night before last, ranging between 30% and 40% compared to normal periods .

He explained that consumer demand focused on major food commodities such as poultry, meat, flour, rice and dairy products.

outlets dedicated teams to supply the