More and more satellites are being sent into space. But after their use, they continue to float as garbage. A German medium-sized company has the technology to remove all the junk - and to create space for new satellites. That attracts prominent customers. 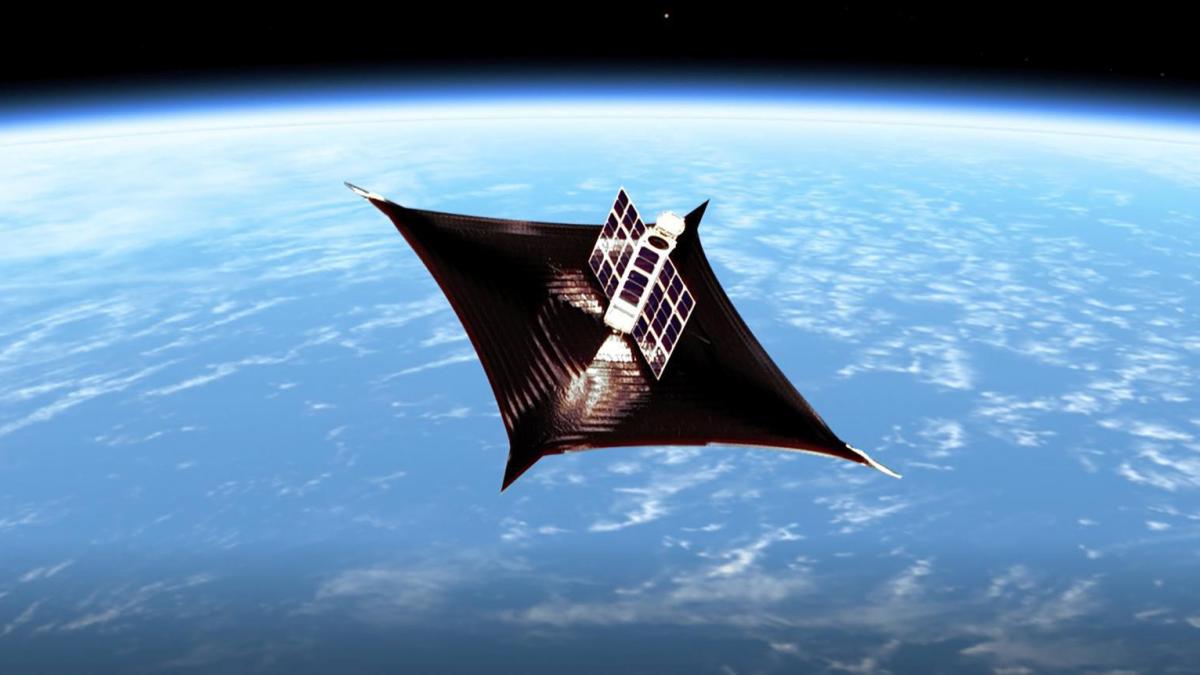 When Ernst Pfeiffer looks at Mars in the night sky, he is a little proud.

“There are five kilos from my company up there,” says the head of HPS.

He is referring to special films to protect against temperature fluctuations in a European vehicle - which failed to land on the red planet in 2016.

Now the rubble and foils of the Munich company are in the Martian dust.

The United States recently had more luck with their land rover.

HPS is not part of that.

But the next mission for the Munich-based company is due in June.

This is not about Mars, but about the big problem of garbage disposal in space, with unique technology.

HPS, the abbreviation for High Performance Space Structure Systems, is one of around 60 small and medium-sized companies in the German space industry.

It is mostly highly specialized and partly networked companies that develop and manufacture high-tech products.

There is currently a spirit of optimism in the industry.

In contrast to the earlier state struggle for prestige between the USA and the ex-Soviet Union, the subsequent generation of the former space pioneers is more diverse.

The spectrum of the “New Space Movement” ranges from billionaires like Elon Musk in the USA, to rocket launches in New Zealand, to small German start-ups whose founders are often fresh from university.

All of these companies have one thing in common: they all have ambitious plans.

With a company history of over 20 years, HPS is one of the established players in the scene.

The “HPS family”, as company boss Pfeiffer puts it, currently has around 70 employees.

It should be 100 at the beginning of next year.

So far, the company has mainly received orders from space agencies such as Europe's ESA or Germany's DLR.

But now the 55-year-old entrepreneur and main shareholder also wants to benefit from “New Space”.

"Fortunately, we have a product that is ideal for the planned large satellite fleets and many rocket launches," says the doctor of engineering.

The HPS boss is referring to space sails: They are launched into space as satellites, attached and deployed.

The goal: to remove dormant satellites or rocket stages from orbit.

Due to the very thin, but still existing, residual atmosphere in the low earth orbit, minimal pressure is exerted on the sail area.

This is how an earlier crash is initiated: the satellite sinks and gets into ever denser layers until it burns up.

In June, the largest disposal experiment by HPS to date is to start in space.

The square sail with an edge length of 2.2 meters is attached to a mini satellite from the Italian company D-Orbit.

He initially devotes half a year to other tasks before unfolding a sail with a wafer-thin film from Munich.

The contract for the mission was just signed in March.

In addition, more will be tried out.

An increasing number of satellites could secure orders for HPS

The satellite and its sail will be launched with a Falcon 9 rocket from Elon Musk.

"There is no better advertising for potential new customers for us from Silicon Valley," says Pfeiffer.

A US company for small satellites recently got in touch with a request for sail modules.

There is now a prototype for a sail with an edge length of five meters for satellites weighing up to one ton.

For HPS it is not the first sailing experiment in space.

There was an attempt to accelerate the crash as early as 2018.

Unfortunately, the camera failed on the rocket stage, which was supposed to show the unfolding of a 1.6 by 1.6 meter sail.

So there is a lack of effective advertising images.

The sail works, says Pfeiffer, because the rocket stage is losing altitude faster than usual.

In the future, HPS expects business from a sector that is of increasing concern to experts.

The rapidly growing number of satellites increases the risk of ever more space debris.

In order for the near-earth orbit to be used by satellites or manned missions at all in the future, an international code of conduct adopted by space agencies (IADC) in 2007 calls for a maximum dwell time of 25 years after the end of the mission of satellites.

While there is no legally binding rule, this deadline is considered the industry standard.

However, if a satellite flies without propulsion at an altitude of roughly 600 kilometers, it can take a good three decades before it burns up.

So an earlier crash must be arranged so that the space debris does not become a danger.

For example, in March a Galileo navigation satellite had to be switched off briefly for an evasive maneuver because an Ariane rocket stage that was over 30 years old was crossing orbit.

This proves the increasing risk of collision in space.

For Pfeiffer, the company is “the world's industrial technical market leader” in space sails.

There have been repeated attempts to use such sails in space, but mostly for research purposes.

Pfeiffer believes the 25-year period until the space debris burns up is far too long.

“Europe, or at least Germany, should advocate a three to five year period,” he demands.

That would probably get him jobs.

One of the peculiarities of the HPS company history is that this company was founded with the idea of ​​sending satellites with sails and the photon printing of the sun's rays to distant planets.

So deeper and deeper into space and not down to earth in glow mode.

There may be a recurrence of this idea.

The German space agency DLR recently announced that it would be investigating a planetary satellite journey with space sails together with NASA.

HPS would certainly be among the applicants if the project could become a reality in years' time.

Pfeiffer is currently fascinated by the "New Space" movement because it also offers many opportunities for the German medium-sized space industry.

"You have to perceive Germany's industry company as a New Space supplier," says the HPS boss.

He finds words of praise for the German government's aerospace coordinator, Thomas Jarzombek.

The CDU politician emphasizes the importance of small and medium-sized enterprises compared to the heavyweights in the industry.

“He is the first of the federal governments in recent years to have done something right.

He relies on their diversity of ideas, ”says Pfeiffer, who is also chairman of the“ Best of Space ”association of medium-sized companies.

For example, he is committed to ensuring that not only the big players in the industry such as Airbus or OHB collect the state space funds.

Apart from that, “Old Space”, which is more supported by the state space agencies, must also become faster, says Pfeiffer.

He sees a wide range of business opportunities for HPS, which recently had sales of almost eight million euros.

The product range is much wider than just space sails.

Another focus is satellite antennas.

HPS is applying for two communication antennas for the "gateway", a kind of manned space station that will possibly be set up as early as 2024 and that will orbit the moon.

A large antenna with a diameter of 1.1 meters was recently delivered for the German communications satellite Heinrich Hertz, which is expected to launch in 2023 and in which several German medium-sized companies are also involved.

HPS also sees itself as a specialist in large, deployable antennas in space, around eight meters in diameter and an eight-meter fold-out arm for the European Earth observation satellite Copernicus-CIMR, which is supposed to provide data on climate change, especially on the polar ice caps.

A small group of German medium-sized companies, including the Garching partner company LSS, see themselves as leading European companies in large deployable antennas in space.

The industry is talking about the LEA project, a Large European Antenna.

"We are competitive against large US corporations," says Pfeiffer.

The CIMR satellite is scheduled to launch into space with the giant radar antenna in 2027.

Calculations and designs are already busy at the HPS headquarters in Munich.

On top of that.

There are even plans for an antenna 25 meters in diameter.

As Pfeiffer says, he has been enthusiastic about space travel since his youth, and he is particularly fascinated by complicated technology.

Because he already participated in numerous tests of his systems in his early years and as a human test object in parabolic flights to simulate weightlessness, he was weightless for a total of 90 minutes in his life.

A total of one and a half hours as an astronaut.