From a profit of 900 million to a huge loss of over 900 million, the stock price fell to a limit, what happened to SF Express?

Chinanews client, Beijing, April 9th ​​(Reporter Zhang Xu) Opened on the 9th, SF Holdings fell to the limit, and the stock price was 72.72 yuan. As for the reason for the sudden limit drop, it stems from the company's announcement of a performance pre-loss announcement last night.   On the evening of April 8, SF Holdings announced its first quarter 2021 performance forecast. SF Holdings expects 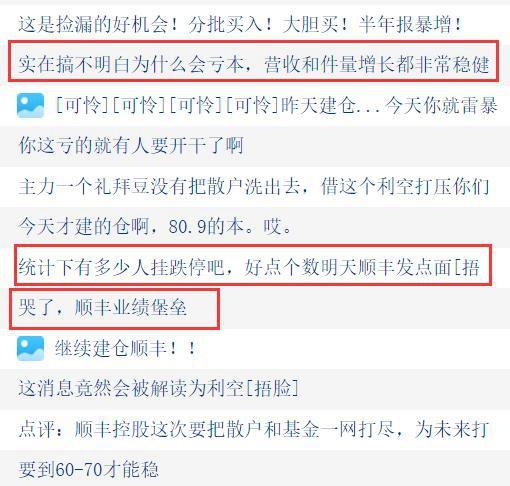 As for the reason for the sudden limit drop, it stems from the company's announcement of a performance pre-loss announcement last night.

On the evening of April 8, SF Holdings announced its first quarter 2021 performance forecast.

Screenshot of the message in the stock bar.

This performance forecast stunned many investors, and they couldn’t figure it out: “S.F. has so many orders and it made a profit of 900 million last year. Suddenly lost 900 million this year? I really don’t understand it.” Some investors said, “It’s a limit, you’re welcome. ."

It seems that everything is going well, why did SF Express suddenly gain a huge loss?

After the one-word limit drops, can it go back up again?

Why does SF Express, which has a good performance, "fall down endlessly"

As a leading company in the logistics and express delivery industry, SF Holdings has grown steadily in recent years, and its overall revenue and profit scale have continued to expand.

The sudden expectation of a loss in the first quarter of 2021 has surprised many investors.

Regarding the reasons for the loss, SF Express said:

First, the temporary increase in capital expenditure input has led to pressure on costs.

At the same time, since the fourth quarter of last year, it has increased its capital expenditures and upgraded the automated production capacity of the transit field.

In the same period, the total business volume of express service companies across the country completed 13.11 billion pieces, a year-on-year increase of 100.3%.

SF Express's growth rate lags behind the industry, which means that its market share has been squeezed.

Second, the rapid growth of preferential distribution business volume and the strong demand for e-commerce in the sinking market have led to rapid growth of economic business among existing customers, and the company's e-commerce parts gross profit has been under pressure.

Third, the "not closing" boom in the express delivery industry during the Spring Festival this year has increased additional costs.

SF Holdings said that in the first quarter, the company provided a record high in subsidies for first- and second-line employees, causing operating costs to rise in the short term.

In the view of express expert Zhao Xiaomin, SF Express's losses are not unexpected.

“Last year due to the epidemic, many capital expenditures that should be completed in 2020 were delayed. Now, SF Express is increasing its efforts to expand the entire industry chain, including the introduction of new aircraft, etc., which will greatly increase capital expenditures. It will undoubtedly have a certain impact on the company's profits."

He also pointed out that regardless of the policy aspect or the market competition pattern, it is more beneficial to SF Express.

"SF has sufficient funds. At this stage, increasing capital expenditures can further enhance SF's advantage in the industry in the long run."

The average loss per investor exceeds one million

SF Express is a leading company in the domestic express delivery industry. On February 18 this year, SF Express’s share price reached an all-time high of 124.7 yuan. Since then, SF’s share price has been trending downward.

The stock price fell 41.68% from the highest point of 124.7 yuan, and the total market value evaporated by 200 billion yuan.

The actual controller Wang Wei holds 60% of the shares of SF Express, and his value has shrunk by 100 billion yuan.

In addition to the head, countless investors were injured in this capital game.

After SF Express started its downtrend on February 18, many brokerages were still bullish.

For example, Northeast Securities gave a target price of 110 yuan on March 18.

On March 29, Northeast Securities gave another target price of 102 yuan.

However, the brokerage sang too much and failed to prevent SF Express from falling.

As of February 28, 2021, the number of shareholders holding SF Express was 165,200, and the market value of SF Express has fallen by more than 200 billion yuan. Based on this calculation, the average loss per household is more than 1.25 million yuan.

As a leading express delivery stock, SF Express has always been the "sweet pastry" in the eyes of fund managers. Among them, there are many top public offering funds such as Xingquan Trend, Bank of Communications Schroder, and E Fund.

If these public funds do not sell them early, they will also suffer substantial losses-your fund will be so green.

Regarding how the stock price of SF Express will change in the future, there will be polarization among investors: some think that now is a good opportunity to buy, and some worry that they will be stuck.

Zhao Xiaomin believes that there is no need to pay too much attention to SF Express's first quarter and second quarter results, because at this stage, only by seizing the opportunity to make capital expenditures can we strengthen the moat.

He also suggested that more attention should be paid to SF Express’s revenue rather than profit. Last year’s revenue exceeded 150 billion yuan, and whether it can exceed 200 billion or even 220 billion yuan this year is very worthy of attention.

The courier Wang Hailong wears a safety helmet and prepares to deliver the goods.

According to SF Holdings, it is mainly benefited from the high growth of time-sensitive products, special-purpose products, and other new businesses.

Industry insiders pointed out that SF Express adopted a low-price strategy in order to seize the sinking market, which had a certain impact on profits.

In fact, "profits for the market" has become a common way of playing in the entire express market.

The business volume of each company is increasing, but the single ticket income is generally declining, which also leads to insufficient investor confidence in it and it is difficult to support the stock price.

How can the express delivery industry get out of the haze of price wars?

Wang Wei, chairman and general manager of SF Holdings, previously stated that with the further boost of e-commerce penetration, consumption classification, and smart logistics, China's express delivery industry has shifted from labor-intensive to a high barrier that is capital-intensive, talent-intensive, and technology-intensive. The industry has huge room for growth in the future.

In other words, the express delivery industry needs to improve its technical content.

Zhao Xiaomin also pointed out, “In the next competition, express companies need to focus more on all-round competition in products, services, and talents, and then add a certain degree of price concessions, which is to enter a higher level of'price war 2.0 mode'. '. If an enterprise fails to achieve these aspects, it is expected that from the end of this year to next year, there will be a situation of'good is better, and bad is worse'." (End)