98 yuan "ticket blind box" was snatched up! Can you really "go and go"?

Blind boxes are not unfamiliar to many people, but have you heard of blind boxes for air tickets? During the Ching Ming holiday, a travel app launched the "98 yuan domestic air ticket destination blind box" activity, which attracted attention. Data show that the event eventually attracted more than 10 million users to participate in panic buying.   The so-called blind ticket box, in simple ter 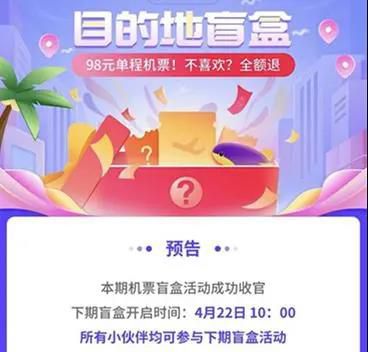 Blind boxes are not unfamiliar to many people, but have you heard of blind boxes for air tickets?

During the Ching Ming holiday, a travel app launched the

Data show that the event eventually attracted more than 10 million users to participate in panic buying.

The so-called blind ticket box, in simple terms, is that the user enters the identity information after logging in, and after the departure airport is selected,

within a specified time at a price of 98 yuan

If the user does not like the randomly selected destination, or the date is not suitable, a full refund can be given, but if the user chooses to lock the ticket, it cannot be refunded or changed.

Blind ticket boxes attract panic buying, but the proportion of trips is not high

Staff of a travel agency: most of them are tail tickets

It is understood that the departure time of this blind box product with a price of 98 yuan is within 30 days, and the more recent date is within a week. Board and lodging, tickets for scenic spots, and return air tickets must be purchased by themselves.

Many netizens posted their winning tickets on various social platforms, including those to Xi'an, Taiyuan, Guangzhou and so on.

The destination, airline, and departure time are different.

After searching, the reporter found that

Some netizens said: "Many of them are relatively unpopular destinations. The daily price is only a few hundred yuan, which is not expensive. Of course, the blind box of 98 yuan should be the cheapest."

Many netizens said that

due to the conflict between the time of the selected ticket and their daily work or school time, the destination is not where they want to go, and they

can only choose to refund.

The reporter saw on the mobile app that the previous event has ended, and the next event will start in late April.

A staff member of a travel agency revealed that, in order to stimulate tourism consumption, the platform and various airlines have adopted

to cater to young people's pursuit of mysterious and exciting psychology, but

most of the tickets are actually tail tickets

According to industry insiders, although this product has attracted a lot of attention,

the proportion of final

, so it will not cause the airlines to become full of passengers.

From the initial costumes and dolls, to stationery, and the most popular airline tickets, etc., before opening the "box", you don't know what is inside. This kind of unpredictable surprise makes many people indulge in it.

What kind of psychology of consumers

behind the booming blind box economy

Regarding the booming blind box economy in recent years, Mao Lihua, an associate professor at Peking University’s School of Psychology and Cognitive Sciences, believes that

, and it strengthens people’s expectations of the results and the surprises they may get sense.

Mao Lihua said: “Young people are more curious, and the blind box extraction can satisfy this curiosity. When you face a box, you don’t know what will be opened. This uncertainty will People are very excited and looking forward to it. In our brain, this uncertainty is closely related to the reward system. When we face uncertain things, the brain will secrete more dopamine, so it will behave Out of preference for uncertainty."

Mao Lihua pointed out that for some blind box products, similar to dolls and clothing,

many young people have blindly and follow the trend of consumption, spending a lot of money and time, which is not desirable

Mao Lihua said: "In fact, long-term addiction to blind boxes, similar to other gambling games, may cause more serious psychological problems. Once addiction, it is not easy to get rid of this sense of dependence. At the same time, it will seriously affect life and work. , All aspects of social interaction. This addiction

will not only bring a relatively large financial burden, but also bring a lot of psychological pressure and social life pressure

, and even affect the physical and mental health of young people."