Consumers said that the discounts on goods of large size, or that include a large number of units, take possession of many of the offers put forward by sales outlets and cooperative societies on the occasion of the month of Ramadan, noting that this prevented them from benefiting from these discounts, despite their high percentage 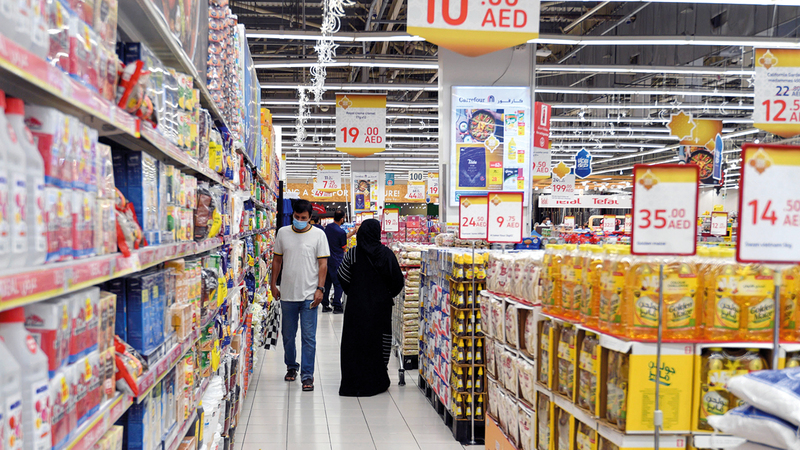 Families confirmed not to benefit from perishable food

Consumers said that the discounts on goods of large size, or that include a large number of units, take possession of many of the offers put forward by sales outlets and cooperative societies on the occasion of the month of Ramadan, noting that this prevented them from taking advantage of these discounts, despite the high percentage of To 50%, compared to discounts on other goods.

They explained to "Emirates Today" that the offers of large sizes are not suitable for small families, as well as that some large families do not prefer to buy these goods, especially food, as they are perishable, and they demanded that the discounts include various sizes of goods, in proportion to the needs of families.

While two officials in sales outlets reported that Ramadan is characterized by increased consumption, especially in foodstuffs, which prompted the outlets to display large-sized commodities in abundance, an expert in retail affairs said, “The focus on offering these discounts is due to the outlets’ desire to increase their sales, especially during Ramadan. , Which increases purchases ».

In detail, consumer Ali Abdullah said: “There are many discounts in sales outlets within the Ramadan offers, but they are on large-sized goods, or that contain a large number of commodity units,” indicating that he is an Emirati young man who formed a family from a short period and could not benefit from Discounts, despite the fact that the rates of discounts for those offers are the largest in the outlets.

Abdullah explained that “one of the sales outlets that have several branches in a number of emirates of the country offered discounts of up to 50% on two types of soup, each of which includes 12 bags, as their price decreased from 42 dirhams to 21 dirhams, and the same outlet also offered two bags of "Flour weighed four kilograms, at a reduction of 41%, so that their price decreased from 16.8 dirhams to 9.9 dirhams."

For her part, consumer Maryam Muhammad said: “She noticed that outlets offered large discounts of 50% on large-sized goods, or that contain many units, which prevented her from benefiting from them.”

She added that «although her family is somewhat large in number, she does not prefer to buy these offered goods, because many of them, especially perishable food, as buying large quantities means being spoiled and throwing them in the waste, as well as the taste of a lot of Food commodities are much better and healthier when they are consumed shortly after they are produced. ”

And Mohammed indicated that «one of the major sales outlets and has branches in more than one emirate, offered a drink powder weighing 2.5 kilos at 34 dirhams instead of 60 dirhams at a 43% reduction. He also offered a 47% reduction on four bottles of one of the types of edible oils of different capacity, so that Its total capacity is four liters. ”

She added that «another outlet offered two packages of ghee each weighing one kilogram, at a price of 15.5 dirhams, compared to 30 dirhams previously, meaning that the discount rate reaches nearly 50%. The large ones that exceed their needs.

In turn, consumer Mazen Al-Sayed said: “Large-sized commodities account for the largest percentages of discounts, but he could not buy them, because he came to work in the UAE and resides alone, and does not need to buy large quantities of goods.”

He demanded that the reductions include various sizes of commodities, commensurate with the needs of individuals and families, pointing out that the large sizes do not fit all families, and that many food commodities are perishable and therefore are not consumed on time.

Al-Sayed explained that “one of the sales outlets offered an offer that includes eight packages of cream caramel at a price of 5.95 dirhams against 7.20 dirhams previously, at a 17% reduction, while another outlet offered a package of 30 eggs at a 42% reduction, bringing the price down from 29 to 16.75 dirhams, in addition to offering A discount on the prices of two cans of labneh, each weighing about one and a half kilograms, by more than 30%.

He added that "outlets offer these sizes until the entire month of Ramadan is sufficient," considering that it is natural for the largest price cuts to be made on large-sized commodities, given their size and the multiplicity of their units.

Another official at a sales outlet, Othman Ismail, said, "Ramadan is an opportunity for outlets to increase sales units," noting that the supply of large commodities contributes to achieving this goal easily.

He stated that «there is a demand for large-sized goods from families with a large number of individuals, as well as families who wish to buy their needs in the medium and long term, and not go to the outlets on a daily basis.

In addition, retail expert Ibrahim Al-Bahr said, "The focus on offering discounts on large-sized commodities is due to the outlets’ desire to increase their sales, especially during the month of Ramadan, which witnesses the largest purchases of food commodities from various outlets during the whole year. "

At the same time, Al-Bahr indicated that competition has increased dramatically between the outlets during the last period, indicating that the competition is witnessing its climax during Ramadan.

Retail expert Ibrahim Al-Bahr said, "Large-sized goods may not be suitable for many consumers and families of all sizes, due to the rapid deterioration of foodstuffs, and the different tastes of some of them over time."

He stressed the importance of storing them in appropriate places to maintain their quality, which is what many regular homes lack, especially with limited spaces and high temperatures with the approaching summer season.

Consumers assured that the large size offerings are not suitable for small families.