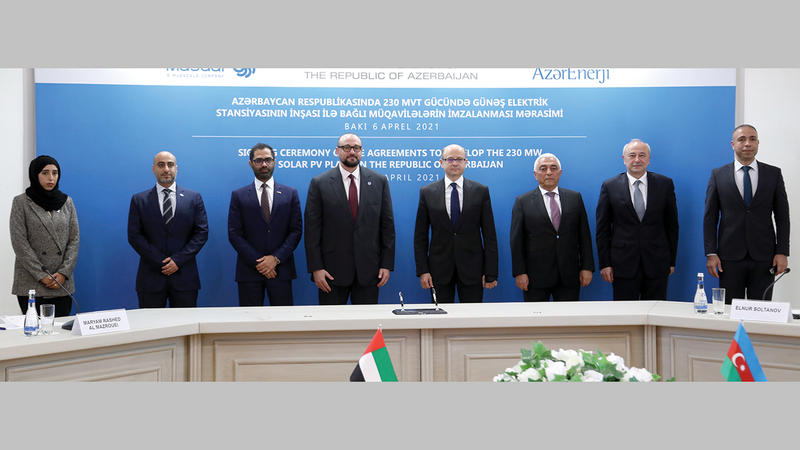 The development agreement was signed at the headquarters of the Ministry of Energy in the Azerbaijani capital, Baku.

The Minister of Energy of Azerbaijan, Pervez Shahbazov, and the CEO of "Masdar", Muhammad Jamil Al-Ramahi, signed the investment agreement for the project, at the headquarters of the Ministry of Energy in the Azerbaijani capital Baku, while the signing ceremony was attended from a distance by the Minister of Industry and Advanced Technology, the UAE special envoy for change affairs Al-Manakhi, Chairman of the Board of Directors of Masdar, Dr. Sultan bin Ahmed Al-Jaber, and Minister of Energy and Infrastructure, Suhail bin Muhammad Faraj Faris Al Mazrouei.

Al-Ramahi and the head of the Azeri OJSC company, Baba Razayev, also signed the agreements of “Energy Purchase” and “Electricity Transmission and Transmission” agreements.

The Minister of Energy of Azerbaijan, Pervez Shahbazov, said: “The signing of these contracts for the establishment of a solar energy plant worth 200 million dollars is a step towards achieving the state’s goals related to renewable energy and carbon emissions. The solar power plant will be constructed in the Absheron area of ​​the capital, Baku, and it will generate 500 million kilowatts / Hour of electricity annually, and contributes to saving 110 million cubic meters of natural gas, avoiding the release of 200 thousand tons of carbon emissions, as well as providing new job opportunities, and attracting more investments to establish new projects.

For his part, Dr. Sultan bin Ahmed Al-Jaber said, "Cooperation with Azerbaijan in this project provides an important opportunity to translate our common visions in the field of climate action into practical initiatives that contribute to developing knowledge and skills, and providing job opportunities in new fields."

In turn, Suhail Al Mazrouei said, “The agreement will enhance the existing cooperation between Azerbaijan and the UAE in the field of renewable energy, and as they are signatories to the Paris Climate Agreement, the two countries are committed to supporting global efforts aimed at confronting climate change and its consequences.”

For his part, Al-Ramahi stressed that the project is an important step on the road to the transformation towards clean energy in Azerbaijan, noting that Masdar has actively participated in the efforts to address the problem of climate change since 2006, through its projects in the field of renewable energy, which are currently spreading. In more than 30 countries.

"We are pleased to work with the government of Azerbaijan through this important project, which would contribute to diversifying the energy sources in the country, pushing forward the efforts of sustainable development and reducing carbon emissions," he said.

Masdar had signed an agreement to implement the project in January of last year, and it is expected that commercial operation will start in early 2023.