More than $ 10 billion: experts have estimated Russia's potential revenue from the sales of Sputnik V in 2021

According to experts from the Alpari Information and Analytical Center, in 2021 Russia can earn $ 10-15 billion from the sale of the Sputnik V coronavirus vaccine. And for two years of supplying the drug abroad, the country's revenue can reach $ 30 billion, experts are sure. According to analysts, such indicators are comparable to the key items of Russian exports. Against this background, economists do not exclude that in the next few years, the implementation of the coronavirus vaccine will become one of the major directions of non-resource supplies of Russia to other countries. 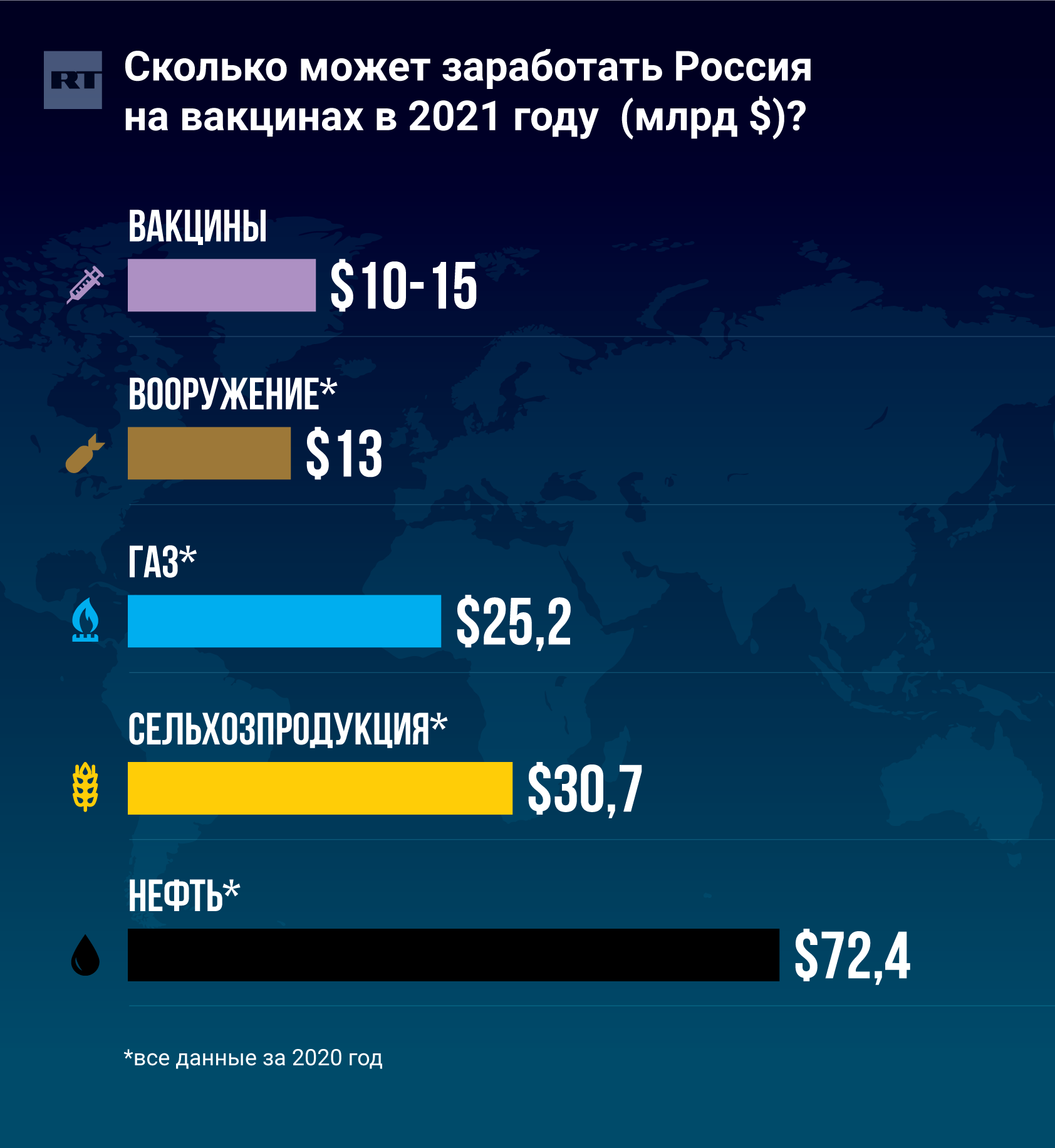 In 2021, Russia can earn about $ 10-15 billion from the supply of the Sputnik V coronavirus vaccine abroad.

This is the conclusion reached by the specialists of the information and analytical center "Alpari".

"The total revenue from the sale of the drug can be about $ 30 billion. Considering that the topic is burning and everyone wants to be vaccinated, respectively, of this amount, we will receive approximately half this year and half next," the head of the company said in an interview with RT Alexander Razuvaev.

According to the latest data from the Russian Direct Investment Fund, the Sputnik V vaccine has been approved in 58 countries with a total population of over 1.5 billion people.

As previously noted by the organization, the cost of one dose of the drug for international markets is less than $ 10 (two doses are needed to vaccinate one person).

As suggested by Alexander Razuvaev, taking into account the announced price due to the effect of the scale of production, the cost of producing a vaccine could be about $ 9.5 per dose.

Meanwhile, since manufacturers need to make a profit, the total cost of the drug for other countries may be slightly higher than the declared $ 10, the expert does not exclude.

“Our estimate may be overestimated, since we must take into account that someone will not get vaccinated, and someone will prefer a non-Russian vaccine.

Nevertheless, we believe that the number of countries where Sputnik V will be registered will continue to grow.

And taking into account the possible premium to the price, we will still reach the same $ 30 billion in total revenue in two years, ”Razuvaev said.

It is noteworthy that the revenue from the sales of Sputnik V in 2021 can be comparable in volume to the key items of Russian exports, the expert emphasized.

Thus, according to official data, over the past five years Russia has earned an average of about $ 13.6 billion from the export of arms and military equipment, agricultural products - $ 24.3 billion, gas - $ 37.1 billion, and oil - $ 98 billion.

“It is also worth noting that in 2020 the volume of Russian non-resource exports amounted to $ 161 billion. Against this background, the sales of Sputnik V may become an important component of our exports, especially taking into account medical tourism,” added Alexander Razuvaev.

According to RDIF estimates, Sputnik V currently ranks second in the world in terms of the number of approvals received by government regulators.

At the same time, the Russian vaccine is almost half the price of foreign drugs based on mRNA technology with similar efficiency indicators, the organization notes.

Meanwhile, experts interviewed by RT have different assessments of the possible volumes of revenue from the sales of Sputnik V in 2021.

Thus, Nikolay Bespalov, development director of the analytical company Arensi Pharma, does not exclude that the total amount may turn out to be less than $ 10 billion.

“The fact is that export deliveries will mainly be carried out from foreign sites, where the process of localizing the production of the drug is currently underway.

So local partners can take some of the cost of the drug, but this is quite natural for a global product.

The conditions here may be different from country to country and from site to site, but again this information is commercial and is unlikely to be disclosed, "Bespalov explained in a conversation with RT.

According to him, direct deliveries of Sputnik V from Russia abroad will also occur, but in smaller volumes.

As the specialist explained, national enterprises will primarily focus on providing Russian regions with vaccines.

“I will not undertake to predict specific amounts, but, probably, tens of millions of doses of vaccines can be supplied to other countries directly from Russia.

In addition, the export of technology should also be taken into account separately, but this, most likely, will already appear in separate lines in the product nomenclature, ”the specialist believes.

As the expert suggested, in Russia and most European countries, the main peak in demand for vaccines will be passed in 2021, and in 2022 more active supplies to third countries will begin.

As a result, the next year in terms of revenue may become more profitable, Bespalov is sure.

“We have too little data for a more accurate assessment of the profitability of export deliveries.

Nevertheless, we agree that this direction has every chance to confidently enter the top key directions for the export of non-primary goods, along with the sale of wood or food products, ”the expert concluded.