Chinanews client, Beijing, March 10 (Reporter Xie Yiguan) According to data released by the National Bureau of Statistics on March 10, in February 2021, the national consumer price (CPI) fell by 0.2% year-on-year, and the rate of decrease was 0.1% smaller than the previous month. Percentage points, which is negative for two consecutive months. Why is this happening? CPI ups and downs chart. Fr 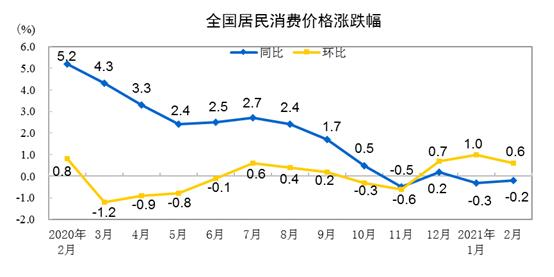 Chinanews client, Beijing, March 10 (Reporter Xie Yiguan) According to data released by the National Bureau of Statistics on March 10, in February 2021, the national consumer price (CPI) fell by 0.2% year-on-year, and the rate of decrease was 0.1% smaller than the previous month. Percentage points, which is negative for two consecutive months.

Why is this happening?

February CPI is still in a negative range year-on-year

The wrong month of the Spring Festival led to a relatively high comparison base in the same period in 2020. In January 2021, the CPI increased from 0.2% year-on-year to a decrease of 0.3% year-on-year.

"From a year-on-year perspective, the CPI fell by 0.2%, and the rate of decline narrowed by 0.1 percentage point from the previous month. Among them, food prices changed from a 1.6% increase in the previous month to a 0.2% drop, which affected the CPI drop by about 0.05 percentage points." City Department of the National Bureau of Statistics Said Dong Lijuan, a senior statistician.

According to Dong Lijuan, the price of pork fell by 14.9% due to the high base in the same period last year, and the rate of decrease was 11.0 percentage points higher than the previous month, affecting CPI by about 0.39 percentage points; chicken and duck prices fell by 8.7% and 2.6%, respectively. , The decline has narrowed; the prices of mutton, aquatic products and eggs rose by 7.5%, 5.9% and 4.3% respectively, and the growth rates have all expanded.

Pork sold in a supermarket in Xicheng District, Beijing.

In food, the slaughter of live pigs continued to recover, and the price of pork changed from a 5.6% increase last month to a decrease of 3.1%, which became an important factor that contributed to the decline in the month-on-month increase in food prices.

A reporter from Chinanews.com recently visited many supermarkets and vegetable markets in Beijing and found that pork prices have dropped after the Spring Festival.

According to the monitoring of the Ministry of Commerce, the weekly wholesale price of pork fell for several consecutive weeks, from 47.47 yuan per kilogram in mid-January (January 11-17) to per kilogram at the end of February (February 22-28). 38.59 yuan, just over a month, a drop of 18.7%.

CPI is expected to remain low in the later period

"Considering the high price increase in March 2020, it is expected that the CPI in March this year will be between -0.1% and -0.3% year-on-year." said Cao Heping, a professor at the School of Economics of Peking University.

"After calculations, the average CPI carry-over factor in the first quarter was -1.4%, of which it was -0.8% in March." Liu Xuezhi, a senior macro analyst at the Financial Research Center of the Bank of Communications, told China News. Production and supply have gradually increased, and pork prices have tended to decline overall year-on-year. It is expected that the CPI in the first quarter will be low.

"From the perspective of the whole year, the domestic epidemic has been initially controlled, the supply of live pigs and other products is sufficient, and the economy is expected to rise, but taking into account the impact of tail-lifting factors, it is expected that the annual CPI increase will be below 2%." Cao Heping pointed out.

The expected price target put forward in the 2021 government work report is that the annual consumer price increase will be about 3%, which is 0.5% lower than the expected target for 2020.

"The lower than last year's expected target indicates that the government has confidence in controlling the CPI at a relatively low level." Sun Guojun, a member of the Party Leadership Group of the State Council Research Office, said at a briefing by the State Council Information Office a few days ago.