"Baoma Factory" in Wuhan: Work with children, and orders are exported overseas

Chinanews.com, Wuhan, March 8th, title: Wuhan "Baoma Factory": work with babies and two orders are exported overseas   Author Wu Yili   Recently, when I walked into the Wuhan Jiashi Garment Factory, I saw a set of packed white shirts and pleated skirts neatly placed on the shelves; in the workshop, women workers in work clothes cut, ironed, and fly needles. Line up, each is busy.   The Jiashi 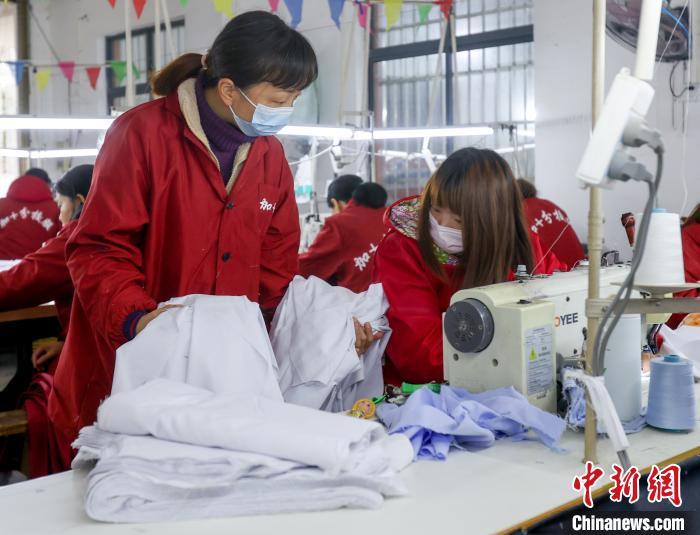 Recently, when I walked into the Wuhan Jiashi Garment Factory, I saw a set of packed white shirts and pleated skirts neatly placed on the shelves; in the workshop, women workers in work clothes cut, ironed, and fly needles. Line up, each is busy.

The Jiashi Garment Factory, which was built in 2018, is located in Huangpi District, Wuhan. It is mainly engaged in school uniforms and JK uniforms (Japanese high school girls uniforms).

Xiang Jingyan, the owner of the factory, told reporters that Huangpi District is located in the outer suburbs of Wuhan and has a large number of migrants, including women who marry away from home, and there is a shortage of job opportunities.

To this end, the Garment Factory in Canada has recruited "Bao Moms" and has already hired nearly 200 "Bao Moms".

Most of the children in the factory's "bao mothers" are school-age children, and they need to take care of their babies while working.

She is also the "Baby Mom", and Xiang Jingyan is well aware of the "pain points" of employees.

She has set up flexible working hours and does not work overtime. She can take her children to and from school and bring them to work. She can work from home under special circumstances.

In addition, the factory has set aside a room as a children’s activity room, equipped with tables, chairs, drawing boards and some toys.

At 8 o’clock every morning, she rides her bike to the kindergarten. She arrives at the factory warehouse about 1 km away from the school to work at 8:30. She is responsible for packing, shipping, etc.; at 4:30 in the afternoon, Yang Qing goes to the school again to pick up the children. Back to the warehouse, at half past five, she took her children home from get off work.

In his spare time, Yang Qing often goes out shopping to buy herself some cosmetics and favorite clothes.

"In the past few years, it was not that I didn't want to work, but that I couldn't find a suitable job. Because of marriage and childbirth, I have been a full-time mother for many years, and I feel "derailed" from society." Yang Qing said, "Nowadays, I am full, confident and tired. Happy."

She said, "Helping women become brave and confident, realize economic independence and independent thinking" is the original intention of setting up a factory by herself.

In 2012, Xiang Jingyan, who was pregnant with her second child, quit her job at home. Watching her husband run around for a career, she secretly decided to study e-commerce by herself, plan to start a business, and try to keep up with her husband.

In 2018, she set up a garment factory in Jiashi, and brought more and more "bao moms" to join them. The work and the baby are not wrong, and the average monthly salary can reach about 6,000 yuan (RMB, the same below).

However, in 2020, due to the impact of the new crown pneumonia, the Garment factory in Canada will experience a large number of chargebacks, which will cost tens of thousands of yuan a month.

After the resumption of work and production, because many schools have not yet resumed, the factory's main school uniforms have no market, and Xiang Jingyan is worried.

"In recent years, JK uniforms have indeed been popular among young people and their sales are booming." Xiang Jingyan decided to transform.

The workmanship of JK uniforms is very demanding. Every grid in the pleated skirt is required to be aligned, and the width of each pleat must be accurately measured.

Xiang Jingyan invited a tailor master to teach her production skills. A few months later, the average daily production capacity of JK uniforms in the factory reached about 1,000 sets.

After the cold winter, spring came, and the Jiashi clothing factory also got out of the predicament. Orders came in one after another, and the monthly sales reached more than 3 million yuan.

A set of well-made, inexpensive clothing flies from Huangpi to all parts of China, to Japan, Laos, Singapore and many other countries and regions.

"The power of women is powerful." Looking at the results in front of her, Xiang Jingyan said firmly.