Ford has chosen its famous Mustang to convey the image of its transition to electric mobility. This Mach-e is certainly not a traditional Mustang, but it is not a "simple &amp; nbsp 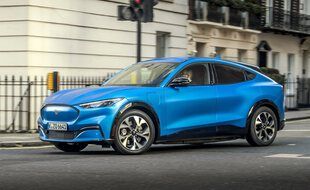 If it seems difficult at first glance to bring a crossover like the Mach-e closer to the Mustang, the designers have managed to transcribe the aesthetic codes of the emblematic model to the newcomer with a certain brilliance.

The tapered headlamps provide a piercing "look", a design element mimicking the grille in the front fascia puts the famous Mustang in prominence, and the illuminated vertical triple claw connects the rear end.

The 3-meter wheelbase also frees up a lot of space on board.

Similarly, the trunk has a capacity of 402 liters, and a second compartment of 81 liters segmentable and washable with water takes place under the front hood.

But the key element of this cabin is obviously the large 15.5-inch screen, which acts as a central control station for all vehicle functions.

However, the engineers had the intelligence to keep some very physical controls on the steering wheel, and air conditioning controls that remain visible at the bottom of the screen in all circumstances.

In addition, this screen has been designed like a smartphone, with simple and ergonomic menus and a presentation that can be personalized according to the elements you want to display, which makes it rather pleasant and easy to use.

To this screen is added a second much more modest in front of the driver which gathers the necessary information: speed, navigation or the remaining range.

This range varies from 400 to 610 km depending on the version selected.

The range is structured around three powers and two battery capacities.

The same power delivered by 2 engines via the 4 driving wheels sees its autonomy reduced to 400 km.

Then comes the battery of 99 kWh (88 kWh net) proposed in rear-wheel drive to ensure up to 610 km, or with a double engine and an all-wheel drive that deliver 351 hp.

In fact, with this last configuration, we noted an average of 22 kWh / 100km during our test in mixed use.

Enough to suggest more than 400 km very real with the big battery.

With the latter, Ford also allows high-power direct current loads, up to 150 kW.

What to recover according to the manufacturer 91 km per 10 minutes of charging.

On the road, we immediately recognize the paw of Ford engineers in the chassis settings.

The precise and fairly communicative steering and the perfectly controlled roll grip make the crossover particularly stable in curves.

The Ford Mustang Mach-e AWD Extended in a few figures