Gold prices decreased at the end of last week between 6 and 7.75 dirhams per gram of various calibers, compared to their prices at the end of the previous week, according to price indicators announced in Dubai and Sharjah. 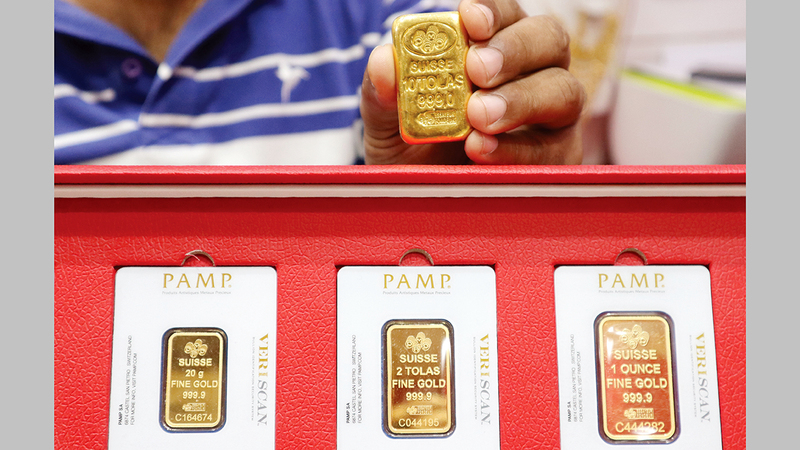 7.75 dirhams, a decline of the gram price in a week

Traders bought gold bars in small and medium pieces to take advantage of the decline in prices.

Gold prices decreased at the end of last week between 6 and 7.75 dirhams per gram of various karat, compared to their prices at the end of the previous week, according to price indicators announced in Dubai and Sharjah.

Officials of gold and jewelry trade outlets told Emirates Today that the recent significant declines in gold prices stimulated the demand for gold bullion in the markets, with a number of dealers preferring to buy during the current period, for purposes related to saving or investment, pointing out to The decline in prices was reflected in a limited way on the sales of artifacts.

In turn, dealers reported that they bought gold bars in small and medium pieces, to take advantage of the decline in prices.

In detail, the trader, Mr. Ali, said that he "bought two pieces of gold bullion at medium weights, for purposes of saving and benefiting from the great price decline that gold has recently recorded."

The trader, Abdul Qadir Hussein, indicated that he preferred to buy one piece of gold bullion recently, after the yellow metal prices recorded significant rates of decline, and that he intends to buy another piece later when gold prices record new declines.

The trader, Sami Abdel Hakam, added that "the recent decline in gold prices was a catalyst to buy two pieces of bullion at small weights, in anticipation of additional declines that encourage him to buy again."

In turn, the director of Hayat Jewelry store, Dilip Dahkan, said that “the markets have recently witnessed remarkable activity in buying gold bullion, with the support of the significant decline in gold prices during the recent period.” Various, but focused more on bullion, compared to gold jewelry, because the latter is associated with occasions and seasons that stimulate buying, unlike bullion, which is designated for the purposes of saving or investment ».

For his part, Director of Sales at "Regie's Jewelry", Mangesh Balikra, said that "the price declines stimulated the demand for the purchase of bullion, especially since a number of dealers in that sector have been waiting for a while and postpone their purchases until the price falls." "Demand has been concentrated in alloys of small and medium weights, with some preferring during the current period to buy cautiously, that is, to buy a piece or two, while gold prices are expected to record new lows."

"A large number of dealers preferred to benefit from the decline in the price of gold, by purchasing pieces of bullion, whether for savings or investment purposes," said Ashwin Shouni, a sales official at the "Imperial Jewelry" store, considering that "careful purchases of bullion are logical in light of The large discrepancy in prices and expectations of continuing low prices, supported by a growing distribution of Corona vaccines in various international markets.

Gold drops globally to its lowest level in 9 months

Global gold prices fell yesterday to the lowest level in nearly nine months and headed towards a decline for the third consecutive week, as the dollar and bond yields rose after statements by the President of the Federal Reserve (US Central Bank), Jerome Powell, in which he said that the increase in returns is not prejudicial. System.

Gold fell in immediate transactions 0.3% to 1,692.13 dollars an ounce, after falling to its lowest level since the eighth of June at 1686.4 dollars.

Since the start of last week, gold has fallen 2.3%.

"It is clear that Powell was not inclined to sufficient monetary easing in relation to the markets, and in some way he gave the green light to a further increase in US yields by saying he was comfortable with that," said Oanda's chief market analyst, Geoffrey Haley.

He added, "All indicators point to the continuation of the bond boom," explaining that it seems inevitable that gold will fall from current levels and record bigger losses to the $ 1600 range.

The 10-year US yields held above 1.5%, while the dollar rose to its highest level in three months.

Higher returns increase the opportunity cost of holding the yellow metal, which does not generate a return.

The decline in prices was reflected in a limited way on the sales of artifacts.

- The demand for artifacts is linked to occasions and seasons that stimulate purchase.