Dealers reported that companies impose fines on bounced bank checks for reasons related to "spontaneous errors" in the writing of checks, and not because there is not enough balance, pointing out that spontaneous errors in checks are among the incoming matters that are difficult to avoid in full. They indicated to Emirates Today. 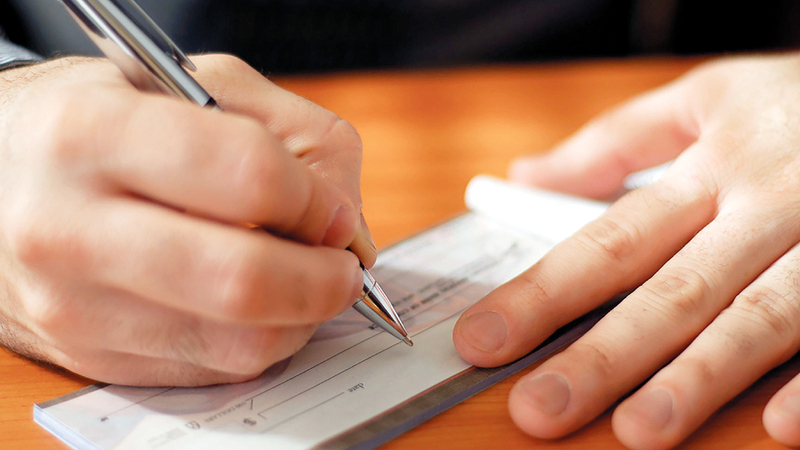 Legal: It may not be imposed without the agreement of the parties

Traders reported that companies impose fines on bounced bank checks for reasons related to "spontaneous errors" in writing the checks, and not because there is not enough balance, pointing out that spontaneous errors in checks are among the things mentioned that are difficult to avoid in a full percentage.

They indicated to Emirates Today that companies exaggerate the value of the fines compared to the estimated value of the banks, which is considered a double fine on those checks, despite the availability of a bank balance covering the value of the checks.

For their part, two legal professionals said: “The imposition of fines by companies on bounced checks is contrary to the absence of an agreement between the two parties, and that it must be stipulated in the contract and be subject to the mutual consent of both parties.”

In detail, the dealer, Ahmed Abdullah, said that he was “surprised by the administration of the private school in which his child learns, telling him to return a bank check within the payments for annual expenses, despite the availability of a balance covering the value of the check, and upon verification, he discovered an unintended mistake in signing one The letters, which made the school administration demand that he pay a fine for bouncing the check, despite the availability of the balance.

The dealer, Mahmoud Hassan, added that “one of the companies that he deals with to pay supplies related to various purchases asked him to pay a fine for returning a check for reasons related to spontaneous errors, such as the absence of extending one of the letters when signing, despite the availability of a balance to cover the amount of the check.” Taking into account spontaneous errors in checks compared to unavailability of balance.

The dealer, Ibrahim Ali, said that "the imposition of fines by companies for spontaneous errors in checks is unacceptable, as long as there is a balance that proves good faith for the dealer and meets his obligations towards the company."

He emphasized the legality of these fines imposed by banks, because the law did not prohibit their imposition, and therefore they are acceptable and in application of the principle of contract Sharia of contractors, but the matter is different for real estate companies and schools, and what they do in imposing fines for bouncing checks, it is not acceptable, and they have no right This is final, especially if there is no contract signed between them to impose such fines.

Here, these companies do not impose fines on the person who reposts him a check, in the absence of a contract regulating this fine.

He added: “Well, what the UAE is doing in the legal amendments by adding many ancillary penalties, such as: withdrawing the check book from the convicted person, preventing him from giving him new books for a maximum period of five years, stopping professional or commercial activity or imposing penalties with a financial fine and withdrawal of the license for a period of six months. For the legal person ».

He continued: “It is also possible to solve the legal person, when the violation is repeated, and all this will greatly reduce the cases of bounced checks, and it is also a great insurance for those who possess this check, by guaranteeing his right due to the fear of the check issuer, to do any of the means mentioned in this amendment, that He shall be overthrown if they are companies or institutions, or if he is a natural person, from being prevented from closing his company or establishment or not receiving a check book. I think that the new amendments, which were recently issued, will strengthen the check itself.

For her part, the legal advisor, Shawq Al-Kathiri, said, "The check according to the origin is a fulfillment instrument, and it is like a contract whereby a person commits to pay to the beneficiary the specified amount through the drawee bank, and as a contract basically, it may happen that the person makes a mistake when writing it." .

Al-Kathiri added: “Regarding a mistake in signature, it ultimately leads to the failure of the check holder’s signature to the form kept with the drawee bank, which results in the check not being disbursed. This is what the legislator has dealt with with Article (401) of the Penal Code. A check, or its signature in a way that prevents it from being cashed, constitutes the crime of issuing a check that has no corresponding balance and is punishable by imprisonment or a fine, but the crime of issuing a check with no corresponding balance is one of the intentional crimes whose material corner must be combined with a moral corner, based on knowledge and will, to inform (the drawer) That his signature is not valid, and that his will is directed towards achieving this effect by not cashing the check, and if it is proven that that intention is negligible, his responsibility must be negated.

And she said: “Regarding talking about fines imposed by some parties, such as banks, companies, or schools, for banks, the constitutional principle states that there is no penalty except with a text, and the fine is one of the types of penalties that may not be imposed except by a legal text, and it should only be imposed by the judicial authorities. Which has the power to adjudicate discounts.

Therefore, if it is imposed by banks as a fine, then my opinion is that it is not permissible, but if it is under the umbrella of bank fees that the bank charges to its customer in exchange for releasing the signature of the rejection form on checks, then its permissibility is conditional that the account opening contract includes what permits the bank to impose these fees Otherwise, it will not be permissible. ”

Al-Kathiri added: “As for companies, schools, and the like, the fine here is a penalty clause for delaying the payment of the amount due, and then if the agreement between the drawer and the beneficiary includes a commitment to pay a certain amount when the check bounces, it is permissible.

But if there is no condition that governs the relationship upon apostasy, then that fine is, and the case is, not permissible, and the company or institution has no right to impose it.

For his part, General Director of the "Opinions Advocates and Legal Consultants" group, Saleh Al Salih, said, "At the beginning, we must acknowledge that a mistake that a person makes spontaneously does not create an obligation on him, nor is it permissible to take it with his guilt, which is what the Qur’an texts have reinforced. », Indicating that it is determined according to jurisprudence, that the error in liability means the deviation in the behavior familiar to the average person, with awareness of this deviation, in the sense that it is stipulated that the error affecting the customer’s credit standing is proving that it was committed intentionally, but otherwise, That his behavior is spontaneous or without awareness, it is not permissible to hold him accountable, neither civil nor criminal, and this does not affect his credit standing with the bank, and saying otherwise is against the law.

Al Saleh pointed out that imposing fines by banks on bounced checks is acceptable, as these fines are an administrative measure that banks are entitled to take, to protect their administrative stability.

As for imposing other fines in relation to bounced checks, it is subject to acceptance and compromise between the two parties, with reference to the rule of “contract Shari'a of the contractors”. Thus, the drawer can reject any item in which an exaggeration is added to contracts.

He continued: “A federal decree has been issued to amend some provisions of the Federal Law on Commercial Transactions, which will be implemented from the beginning of 2022, and according to the amendments required by the decree, it has included many amendments that provide a set of mechanisms and alternatives that ensure the collection of the check value in the fastest and simplest way. Enabled and beneficiary protection.

This includes obligating the bank to partially fulfill the check after deducting the full amount available to the beneficiary from the value of the check, and making the bounced checks an executive bond to be executed directly by the execution judge in the court, all of which makes the companies imposing fines on the returned checks contrary to the law and enrichment, without reason. Legal, after the new decree guaranteed the beneficiary, obtaining his right without waiting for any criminal or civil trial against the drawer.

• Companies exaggerate the fines, compared to the estimated value of the banks, which is considered a double fine on checks.

• Imposing fines on returned checks is in violation, in the absence of an agreement between the two parties.