Véolia / Suez: behind the scenes of the biggest battle of French capitalism

Since the announcement at the end of August of Véolia's desire to buy Engie's stake in Suez, a historic war has started between the two enemies of water management. Low blows, political and legal maneuvers, all the ingredients are there to make this case the biggest battle of French capitalism. 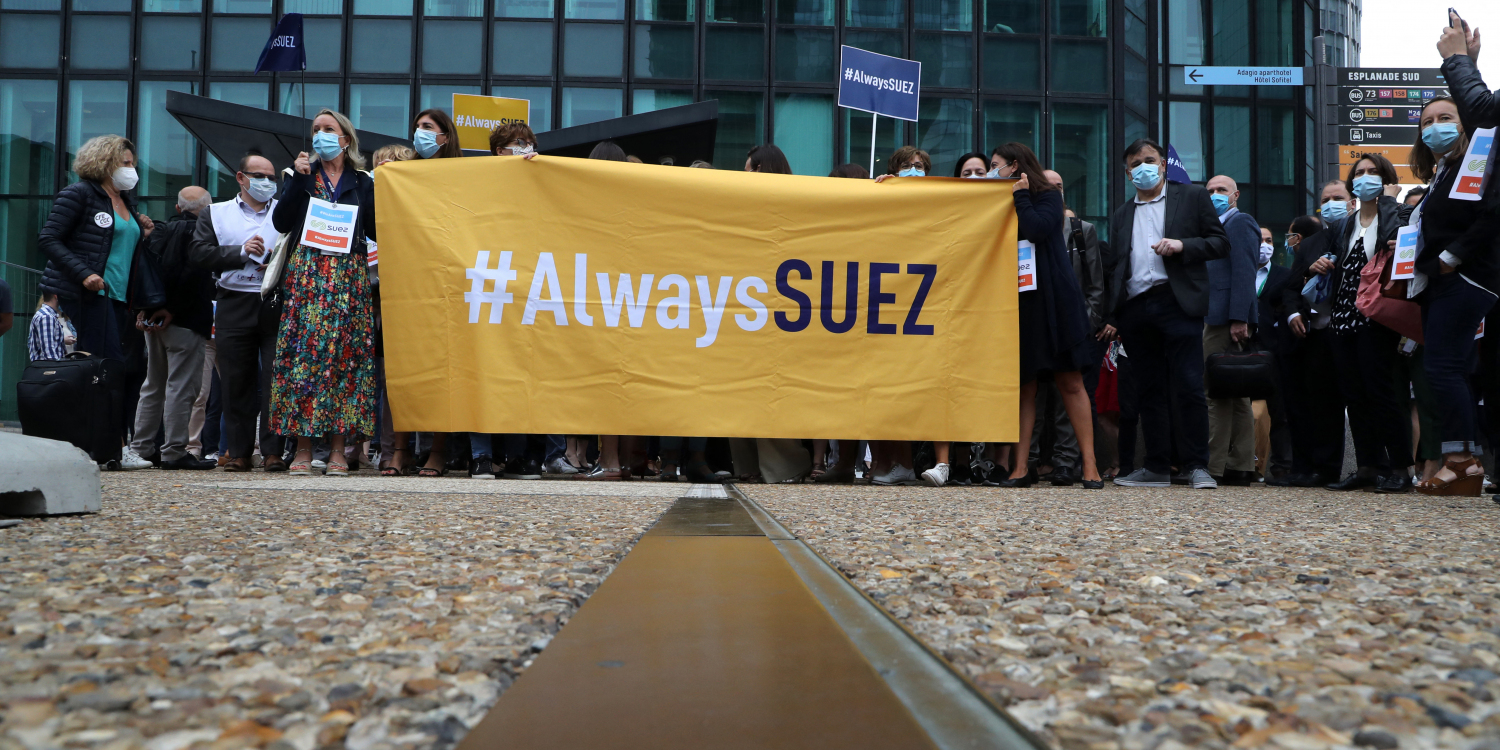 Since the announcement at the end of August of Véolia's desire to buy Engie's stake in Suez, a historic war has started between the two enemies of water management.

Low blows, political and legal maneuvers, all the ingredients are there to make this case the biggest battle of French capitalism.

In all economic circles, one subject animates conversations: Véolia.

The world number 1 in water announced late the day before, by surprise, its desire to get its hands on its historic competitor, Suez.

Two companies, respectively number 1 and number 2 worldwide in the water and waste market, who know each other as much as they hate each other.

This Tuesday, the Paris Commercial Court owes a new arbitration between the two groups.

A decision on the merits of the case eagerly awaited by the protagonists.

Between the launch of hostilities and this decision, six months of cheap blows, maneuvers and bitter pikes like we rarely see in the French industrial landscape.

Dive behind the scenes of an extraordinary case.

Véolia, well recovered by its CEO Antoine Frérot, dreamed of getting bigger and eyeing its historic competitor for a long time.

The story suddenly accelerated when Engie, owner of 30% of Suez, formalized before the summer of 2020 the sale of its stake.

Véolia, used to the mysteries of power, prepared everything in secret, taking advantage of the summer torpor and the vacations taken by the management of Suez.

She made a mistake: refusing to believe this offer.

However, all of Paris knew that Engie wanted to sell quickly and well.

"They were naive at Suez, they saw nothing coming", summarizes a good connoisseur of the file.

Monopoly, employment: the challenges of the takeover of Suez by Veolia

This surprise operation, very well oiled, is positively received by the government.

The next morning of the offer, Jean Castex is very favorable to such a merger.

"Antoine Frérot is a patriot. He called me in the middle of summer to tell me about it," said the Prime Minister to a few journalists.

"It is a good solution for Suez if Véolia can guarantee a good price and the maintenance of jobs in France."

"Bercy tells us it's solid"

On the side of Bercy, we also applaud with both hands.

The Minister of the Economy, Bruno Le Maire, has an appointment that morning with Jean Castex to talk about the recovery plan which must be presented a few days later.

He confides in the same journalists on the sidewalk of Matignon.

"We worked on it all weekend. It's a great operation that can create a real French champion."

"It remains to find the right price", they say to Bercy.

It is a floor.

"If it is necessary to increase it, we will look", slips the direction of the group with a smile.

Véolia is delighted, knows that he can be more generous if necessary, and promises his hand on his heart that he will keep jobs in France.

Above all, the group affirms that Méridiam, the investment fund with which it has partnered to make its offer and which wants to take over, for competition reasons, Suez's water activities in France, is serious and well-intentioned.

A weighty argument in the eyes of the Ministry of the Economy, which assures Jean Castex to know the fund.

"Bercy tells us that it is solid," even slips the Prime Minister when the offer is announced.

From honeymoon to pitched battle

However, the announced honeymoon turns in a few days into the biggest battle between two companies in recent years.

Because Suez simply does not intend to sell.

Its management is mobilizing.

And Bercy feels the trap coming.

"Veolia lied to us. They made us believe that the Suez agreement would be a formality to be obtained and that the activities of Suez in the water in France which would be sold would be competitive. They played with us and that's it. is not acceptable, "one thunders at the Ministry of the Economy.

Bruno Le Maire is chaining the TV and radio shows to alert on this operation.

The atmosphere suddenly turns to storm.

The minister wants an amicable settlement and nothing else.

In private, he doesn't have enough harsh words against Engie, Véolia and Suez.

"I'm beside myself," he blurted out several times in a small group.

Why Engie wants to sell its stake in Suez to Veolia

As nothing should go as planned in this file, after many twists and turns, Suez takes out of his pocket a white knight: Ardian, a highly respected investment fund, headed by one of the most powerful women in Paris, Dominique Senequier .

Its role: to counter the offensive of Véolia by buying in its place the participation of Engie in Suez.

But the energy of despair deployed by Suez is not enough.

Ardian quickly gives up the fight.

Engie, always in a hurry, sells its 30% stake to Véolia in early October.

State administrators are in the minority.

Unheard of in a company partially owned by France.

To save face, Bercy then urgently organized a telephone meeting between Bruno Le Maire's chief of staff and several journalists.

The ministry hopes to show that it is still on the move.

The next day, all the dailies that headline on this affair do not fail to highlight the humiliation for the executive.

Veolia, for her part, trumpets.

Antoine Frérot says to himself that the deal of the century in the sector is for him.

At 62 years old, the man who turned the group around is convinced of the industrial interest of this operation.

"It's a question of ego. He wants to create this giant and leave with a halo of glory as soon as the file is completed. It will prevent him from seeing the disaster generated by this operation," tackles an observer.

Suez then embarks on a fight to the death not to be eaten.

Two men are in charge.

First, Philippe Varin, an industrialist well known for having led PSA, and who thought he would spend a sort of quiet pre-retirement as chairman of the board of directors of Suez.

Then, the young Bertrand Camus, who manages the world number 2 in water on a daily basis.

Together, they mobilize the company from floor to ceiling, create a sacred union with their unions, use all their networks to denounce this operation.

Each camp is invective through the media.

Like that day, at the end of September, when Bertrand Camus, guest on Europe 1, called Antoine Frérot a "liar".

A dialogue more often heard in schoolyards than in the mouth of a big boss.

Two armies of communicators and advisers

To try to win, each group raises an army.

On the communication side, Véolia opts for the famous Image 7 agency, which manages the Carlos Ghosn case, and for Havas.

Everyone has their pages of advertisements in the press.

The two groups also took the best lawyers, such as Jean-Michel Darrois or Jean Veil at Suez.

It's not the crisis for everyone. Some people are making their year with this deal!

To go into battle, we also need advisory banks.

Here again, we find the biggest names in Paris.

He knows the file well, having been, in 2000, at the origin of the creation of the water giant.

We also find the former boss of Medef, Laurence Parisot, who now heads the American bank Citigroup in France.

Citigroup defends the interests of the Board of Directors of Véolia.

Opposite, Suez has bet, among others, on Rothschild.

The best lobbyists in Paris are in demand… and highly paid.

"This is not the crisis for everyone," quips a minister.

"Some are making their year with this deal!"

"It's unheard of, and it's shameful"

All low blows are allowed.

All possible and unimaginable legal proceedings are launched.

Suez goes so far as to set up a foundation in the Netherlands to locate its water in France.

The goal: to take out this division to prevent Veolia from butchering it, and therefore to remove any interest in this operation.

"It is unheard of and it is shameful at this level of competence", judges a specialist in the file.

Each blow is returned to the adversary.

Antoine Frérot continues meetings with the press to defend his project and ensure that it will win.

Suez does the same to dismantle the operation step by step with a leitmotif: "You saw the offer from Veolia, you? Not us."

In fact, no offer has yet been formally filed with the financial markets authority at that time.

Not a week goes by without a sweet word between the two groups, who only speak to each other in court.

Despite repeated calls from Bruno Le Maire to find an amicable solution, the rare meetings between the leaders came to an end.

"They can't talk to each other," laments someone close to the case.

It must be said that each in his corner instigates the next twisted blow.

Suez, for example, makes the Ardian board stand out from the wood.

The investment fund wants to believe in a kind of third way in this file, which would allow everyone (and especially himself) an exit to the top (potentially lucrative).

The idea is to sell only a few assets to Véolia, while keeping a consistent and competitive Suez group.

End of inadmissibility on the side of the world number 1 in water.

“This is our project, slightly amended, and nothing else,” they say from the Porte d'Aubervilliers side, where the group's headquarters are located.

More than ever, Véolia embraces the popular saying that the best defense is attack.

Sunday evening February 7, the group formally launches its offer on the capital that it does not yet hold.

"This time, we expected it," the Suez management almost sneered.

But everyone is tired of this trench warfare "with assaults as ineffective as those of 14-18", to use the slightly annoyed words of a close friend of the two groups.

"It's a shame for the place of Paris", laments the next day at the microphone of Europe 1 Bruno Le Maire, who preaches in the desert.

Véolia now seems in a position to win the war of attrition.

Ardian said on Wednesday February 17 that he would not submit a counter-offer.

Everyone seems finally in favor of the appointment of a mediator to try to get out of this imbroglio.

But this affair will leave traces and the forced marriage promises to be tumultuous.