The property market has been regulated more than 60 times throughout the New Year, and housing prices are going to drop?

Chinanews client, Beijing, February 19 (Zuo Yukun) Soon after the start of 2021, the property market in Beijing, Shanghai, Guangzhou, Shenzhen, Hangzhou, Xi'an and other places continued to experience "hot" phenomenon, and "new hot" Scenes such as "people shake" and "price jump of second-hand housing" appeared in turn.   In this context, many cities have intensively issued new control policies, 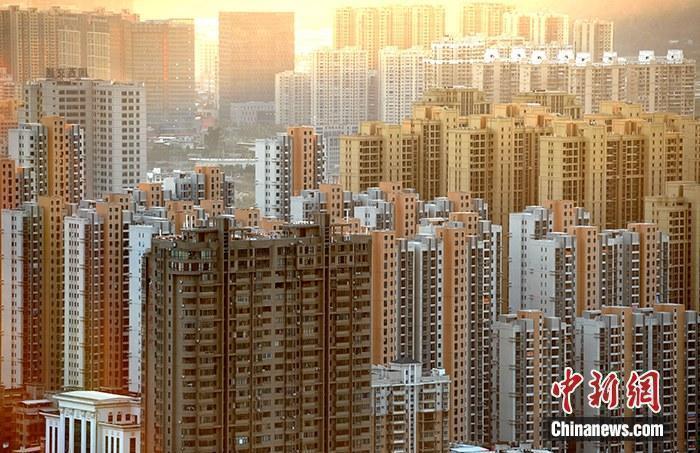 Chinanews client, Beijing, February 19 (Zuo Yukun) Soon after the start of 2021, the property market in Beijing, Shanghai, Guangzhou, Shenzhen, Hangzhou, Xi'an and other places continued to experience "hot" phenomenon, and "new hot" Scenes such as "people shake" and "price jump of second-hand housing" appeared in turn.

On the evening of January 21, the "Opinions on Promoting the Stable and Healthy Development of the City’s Real Estate Market" (hereinafter referred to as the "Opinions") jointly issued by eight departments including the Shanghai Municipal Housing and Urban-Rural Construction Management Committee, pointed to the unrest in Shanghai The property market.

In the "Opinions" that will take effect the next day, a housing purchase restriction policy that has caused concern is that if a couple purchases commercial housing within 3 years from the date of divorce, the number of housing units they own is calculated based on the total number of households before the divorce.

"The loophole of fake divorce has been clearly closed in many cities in 2020, and the message of Shanghai's tightening this time is also very clear."

Before Shanghai, the first-tier city to crack down on fake divorce buying houses was Shenzhen.

On July 15, 2020, the Shenzhen Municipal Housing and Construction Bureau issued the "715 New Deal" known as "the most stringent property market regulation in history". The divorce purchase of a house goes back three years.

The picture shows the Lujiazui Financial Center across the river from Shanghai Bund.

And just two days before Shanghai issued the "Opinions", on January 19, Shenzhen issued a document detailing the "715 New Deal": Commercial housing purchased by both spouses of a resident family can only be registered under the name of a family member who is qualified to buy a house. .

In Shanghai's "Opinions," the regulatory policies that have caused concern as well as blocking false divorces include the "2 to 5" value-added tax, which is to increase the period of exemption of value-added tax on personal external sales from 2 years to 5 years.

The analysis believes that due to the short-term speculation in the market, there is a price difference after buying a new house. Increasing the VAT exemption period can increase the cost of speculation, and these combinations can reduce the enthusiasm of speculative buyers.

Before and after, on January 27, Hangzhou issued the "Notice on Further Strengthening the Regulation and Control of the Real Estate Market" to increase regulation and combat the "new fever."

The number of purchase-restricted units for those who have settled in less than 5 years has been reduced from 2 units to 1 unit, and it takes 3 years for the house to be gifted to others to be eligible to purchase a house; in terms of sales restriction, the property certificate with a winning rate of less than 10% can only be eligible for a property certificate for 5 years. sell.

In addition to the above-mentioned “patching” policy upgrades for the regulation and control measures that many cities have taken on the property market, substantial control measures have gradually surfaced.

On the housing finance side, on January 29, the Shanghai Banking and Insurance Regulatory Bureau issued the "Notice on Further Strengthening the Administration of Personal Housing Credit", requiring banks to strictly review the source of the down payment funds and solvency, and to differentiate between commercial banks within Shanghai’s jurisdiction. The implementation of housing credit policies, housing credit management and other work put forward requirements.

On January 30, the Beijing Banking and Insurance Regulatory Bureau issued information requesting banks to conduct a comprehensive self-inspection of the compliance of newly issued personal consumption loans and personal business loans since the second half of 2020.

Yan Yuejin, research director of the Think Tank Center of E-House Research Institute, said, “Beijing’s inspection fully reflects the guidance of financial regulators in continuing to implement the policy of'housing to live without speculation'. It has strong signal significance. Combined with the previous new housing loan policy issued by Shanghai It can be considered that one of the most important tasks of recent real estate regulation is to strictly investigate the phenomenon of illegal capital inflows into real estate. This also means that the banking system and the housing management system will be more powerful in "combination punches", which will help stabilize market expectations."

The wave of strict investigation of property market funds in first-tier cities has also spread to more cities.

On February 3, the Hangzhou Municipal Housing Security and Real Estate Administration issued a notice to work with Zhejiang Banking and Insurance Regulatory Bureau and other departments to crack down on illegal capital freezing.

Relevant financial institutions are required to regulate management and ensure that the frozen funds account must be an account under the name of the family member who purchases the house.

"If it is found that there is an irregular freezing of funds, the company will cancel its qualification for lottery."

A residential building in Hangzhou.

Guangzhou is more direct. After the Guangzhou Housing and Urban-rural Development Bureau severely cracked down on illegal activities such as driving up housing prices, the four major banks in Guangzhou increased their mortgage rates across the board on January 27, and the first and second mortgage rates in Guangzhou were raised to 5.2% and 5.4 respectively. %.

Mortgage interest rates and down payment ratios have always been the key to curbing the property market.

Regarding the main reason for Guangzhou to start regulation with housing loans, Li Yujia, chief researcher of the Guangdong Housing Policy Research Center, believes that last year, Guangzhou’s housing loans were large in volume and the housing market was hot. The recent tightening of housing loans is to cool the local housing market in terms of quotas and interest rates.

"Funding is the top priority of this round of property market regulation in various regions." Zhang Dawei, chief analyst of Centaline Real Estate, said that this round of multi-city upgrade and regulation will help curb the "false fire" of current hot cities and avoid short-term market out-of-control. Continue to restrict the disorderly entry of funds into real estate and strengthen policy implementation."

Will the temperature of the property market be cooled by being splashed with "cold water"?

According to incomplete statistics, since 2021, various real estate control policies have been issued more than 60 times.

Zhang Dawei said that the "overheated" property market performance is the market reason for this round of intensive control.

"The entire property market did indeed experience a typical rise, and the rise mainly occurred in some areas, with first- and second-tier cities as the hot spots. In particular, in the housing price data released by the National Bureau of Statistics in December 2020, Shanghai and Shenzhen can be seen. There is a phenomenon that the increase has been significantly faster than before." Zhang Dawei said.

The property market in hotspot cities continues to heat up significantly. Even the Spring Festival just past, under the background of "Chinese New Year in situ", some hot cities ushered in a good start in the usual low season of property market transactions.

According to incomplete statistics from Centaline Real Estate Research Center, after the third day of the first month (February 14), more than 100 second-hand houses were sold in Beijing every day. Compared with previous years, the property market activity during the Spring Festival this year has increased significantly.

However, although the Spring Festival in some cities has shown a “low season” compared to the same period in previous years, the industry generally believes that after the “cold water” of the regulatory policies was poured, the actual effects of the tightening policies in many places in January have been reflected in the market. .

"Recent control policies are mainly focused on removing the soil for speculation in the real estate market, stabilizing market price expectations through various means such as'patching', ensuring the self-occupation demand of homeless households, and accurately combating speculative demand." Zhang Bo said, the first-tier cities The housing market has cooled down, especially in some sectors that have been heavily speculated in the early stage, and prices have been significantly adjusted. Second-tier hot cities have been significantly affected by the Spring Festival holiday, and transaction volume has declined to a certain extent.

"It can be seen that after the regulation, there has been a wait-and-see sentiment in the market, and market enthusiasm has declined." Pan Hao said, and how the property market will go after the Spring Festival remains to be seen.