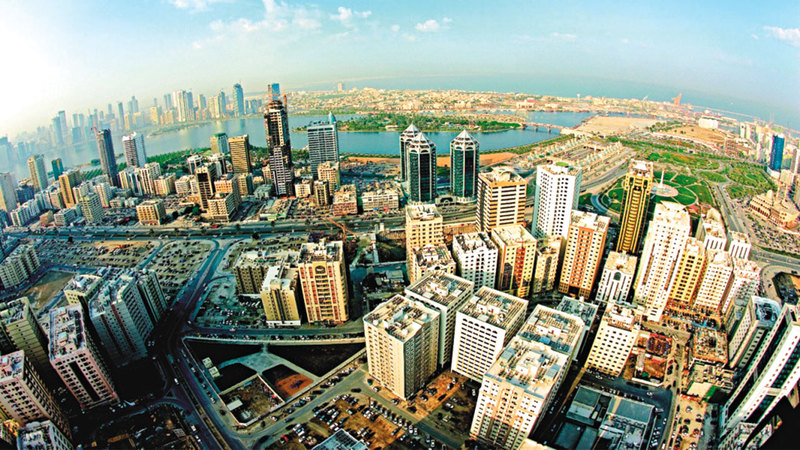 Real estate developers attributed it to work policies related to reducing "return" ... and "Sharjah Chamber": "The contract is the Sharia of contractors."

Tenants of residential units in Sharjah said that real estate companies are raising the fines of bounced checks in the terms of lease contracts, noting that some companies have doubled the fines, while others have doubled.

For its part, real estate companies explained that some companies have recently tended to impose these increases in the framework of their own work policies to reduce the number of bounced checks, but considered that increasing fines in lease contracts is an unacceptable exaggeration, especially if it exceeds the 200 dirham barrier.

In turn, the representative committee of the real estate sector in the Sharjah Chamber of Commerce and Industry stated that the clause related to check fines in lease contracts is due to joint agreements, mutual consent and acceptance between companies and tenants, with reference to the rule of "contract the Sharia of contractors".

In detail, the tenant, Ahmed Mahmoud, said that he was surprised when the lease contract was finally renewed, that the real estate company that manages the building in which he lives in Sharjah has doubled the value of the bounced check fine clause in the contract from 500 dirhams to 1000 dirhams.

Mahmoud considered that this is a great exaggeration and represents a new financial burden on the tenants, especially as some companies take advantage of the difficulty of moving families with the school year, and raise the value of those fines.

As for the tenant, Alaa Ibrahim, he stated that when he renewed the lease contract for his apartment in Sharjah, he was informed that the developer would increase the fine on any returned checks from 200 dirhams to 500 dirhams, an increase that exceeds twice the previous amount.

For his part, the tenant, Laith Abdullah, said that the fine for bounced checks was raised from 500 dirhams to 1000 dirhams upon renewing the lease contract for his apartment in Sharjah, indicating that this matter is exaggerated and unjustified by the real estate company that manages the building, especially with the possibility Tenants have been exposed to unintended errors when signing checks that cause any check to be returned even if there is an amount available in the bank that covers the value of the check, which adds a large financial burden on the tenants.

In addition, Fouad Jassim, director of Manarat Al-Shati Real Estate Company, said that some real estate companies have recently started noticeably tending to impose fines in large proportions, or increase the value of fines related to checks in lease contracts, within the framework of work policies for companies to increase the factor Deterrence to tenants to avoid bounced checks.

He stressed that imposing fines on tenants of 500 dirhams or 1000 dirhams is an unacceptable amount for companies.

He added that there are no specific criteria determining whether or not to impose fines for returning rental checks, but it is common and acceptable to put clauses in the contract for fines ranging between 200 and 300 dirhams, especially since the lessee pays another fine to the bank when returning the check, and therefore he is fined twice.

For his part, the executive director of Al Somme Real Estate Company, Sufyan Al Salamat, said that raising the fine on the checks returned by some real estate companies is a kind of warning to some tenants not to be negligent in paying the rental obligations on time due to the circumstances imposed by the Corona pandemic », Whether for justified or unjustified reasons.

In the same context, the real estate expert and head of "W Capital" real estate brokerage, Walid Al-Zarouni, considered that the imposition by real estate companies of increases in the value of fines for bounced checks in lease contracts is an unacceptable exaggeration, especially if it exceeds the 200 or 300 dirhams barrier.

He said that companies can in that case also treat each tenant according to his record and according to each case separately, and it is not normal to treat the perpetrator in the same way as the tenant who has previous cases of procrastination.

In turn, the head of the representative committee for the real estate sector in the Sharjah Chamber of Commerce and Industry, Saeed Ghanim Al Suwaidi, stated that imposing increases on tenants in relation to the terms of bounced checks in lease contracts is subject to acceptance and compromise between the two parties with reference to the rule of "the contract is the Shari'a of contractors", and thus the tenant can Rejecting any clause of exaggeration that is added to contracts, especially with the presence of several alternatives and options for real estate companies that can be dealt with.

And Al-Suwaidi considered that doubling the fines by large values ​​is an exaggeration by some companies, which it is logical for some to resort to imposing fines to ensure compliance with the payment on the specified dates, but without exaggerating the fine estimate and taking into account the situation of each tenant separately.

The real estate broker, Ahmed Al-Gammal, said that the recent increase in the value of bounced checks fines for some real estate companies comes in light of the repercussions imposed by the Corona pandemic, which made a number of companies tend to increase the deterrence factors for tenants, which avoid the chances of returning checks and thus affect their role. In the company's financial policies.

On the other hand, he explained, the fines come to counter any exploitation by some tenants of market conditions in procrastinating through checks, indicating that some companies raised the value of fines in an exaggerated and unprecedented manner.

Companies have doubled the fines from 500 dirhams to 1,000 dirhams.