Wasteland becomes an oasis, Ningxia wine "should surprise the world" 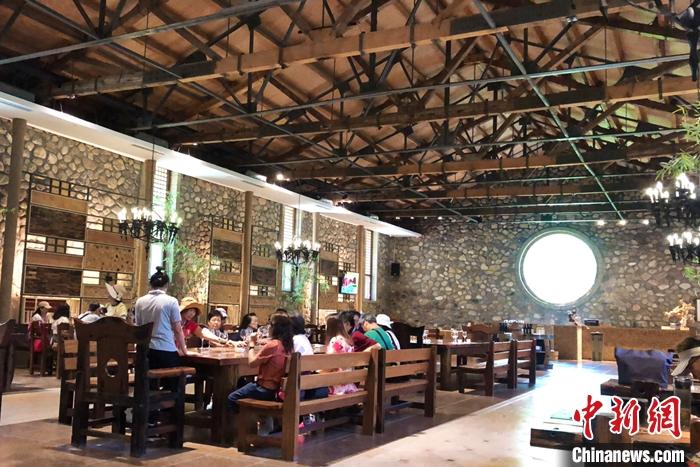 In the finale of the domestic hot drama "Mountain and Sea", actor Huang Xuan played Ma Defu's sentence "Ningxia's high-quality wine fragrant at home and abroad", which brought Ningxia wine into people's field of vision again and became one of the hot topics discussed at the Ningxia Conference this year.

According to the "Historical Records·Dawan Biography", grapes were introduced to China during Emperor Wu of the Han Dynasty.

The poet Ma Zu of the Yuan Dynasty often used the verse of "Grapes pity wine, alfalfa takes advantage of the land" in his poem "Lingzhou", telling the long history of growing grapes on the eastern foot of Helan Mountain.

Today’s Helan Mountain East, where the development of the wine industry is combined with the strengthening of ecological restoration, 350,000 mu of wasteland has become an oasis, and its wine production area has become the largest contiguous planting area of ​​wine grapes and winery wine production area in China. 130 million bottles of wine, with a comprehensive output value of 26.1 billion yuan.

The winery founded by Yuan Hui, a representative of Ningxia People's Congress and chairman of Ningxia Zhihui Industrial Group Co., Ltd., was the first batch of wineries transformed from sandstone yards in the 1990s.

He said that the cultivation of wine grapes requires sandy soil and gravel, which is suitable for planting in the eastern foothills of Helan Mountain where soil erosion is serious.

Local wine grapes are planted with a unique buried soil planting method. The greening of the winery and the construction of shelterbelts have greatly increased the forest coverage. The "shallow trench planting" of vineyards has become the largest water and soil storage project in the eastern foot of Helan Mountain.

He said that unique terroir is the foundation of brand confidence.

"The planting of wine grapes not only allows the locals to get rid of poverty and become rich, but also shows the practical value of the concept of'green water and green mountains are golden mountains and silver mountains', and it also gives Ningxia an extra'purple business card' to the world stage."

In June last year, General Secretary Xi Jinping visited the grape planting base of Yuanshi Winery in Xixia District of Yinchuan City and stated that Ningxia should combine the development of the wine industry with the strengthening of the Yellow River beach area and the strengthening of ecological restoration, improving the technical level and increasing cultural connotation. Strengthen publicity and promotion, build your own well-known brand, and increase added value and comprehensive benefits.

Subsequently, Ningxia will focus on the development of nine industries, including wine, with the construction of the Yellow River Basin ecological protection and high-quality development pilot area as the overall plan. It intends to transform its distinctive advantages into competitive advantages for Ningxia's industries to move towards domestic and overseas.

The "Implementation Plan for the High-Quality Development of the Nine Major Industries in the Autonomous Region" issued on January 4 this year in Ningxia mentioned that the eastern foot of Helan Mountain should be turned into the "Wine Capital".

"Historical accumulation and good ecological effects are the key to the development of wine to this day, and building a new marketing system is the magic weapon to increase brand awareness and influence." Talking about the brand building of the key elements of building the "Wine Capital", Ningxia National People's Congress representative, Ningxia Mao Fengling, a professor at the University’s School of Food and Wine, said that the integration of the tertiary industry will allow the wine brand to continue to develop in the long run.

"Take the exhibition vines that give life to the grapes as an example. In winter, let the vines be buried in the soil to rest, while the exhibition vines in spring symbolize the arrival of new life. This is a brand festival with unique terroir characteristics in the Ningxia region, which can become a cultural and tourism integration. A highlight."

Mao Fengling recognized the winery tourism model of "wine + cultural tourism", which she called a microcosm of the integrated development of cultural tourism and characteristic industries in Ningxia.

“Building a fine wine tourism route and improving the tourism identification system along the eastern foot of Helan Mountain is one of our current scientific research topics.”

Ningxia wine people such as Yuan Hui are also thinking about integrating more grape culture elements into the homestay, so that each bottle of wine cork has a chip, and consumers can trace the entire planting and production process through scanning.

He said: "In fact, everyone has a vineyard of their own in their hearts. Whether in the cloud or on the ground, they can have the best experience." (End)