Play a good start in the revitalization of the village: the village is dressed up to help the integration of agriculture and tourism

China News Service, Chongqing, January 25 (Wang Tingting and Zhang Yan) A half-hour drive from Qianjiang City, the reporter came to the Zhaizi community of Fengjia Street. There are rows of new homes, chickens and dogs hearing each other, flat concrete roads shuttle between the white walls and green tiles, the Apeng River is jade-like green surrounding the foot of the green mountains, and the vi 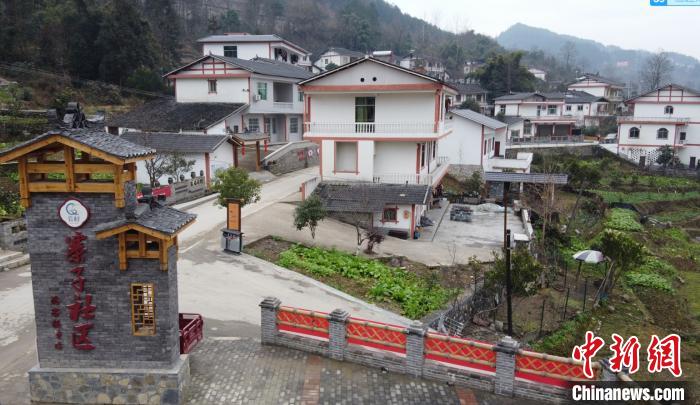 There are rows of new homes, chickens and dogs hearing each other, flat concrete roads shuttle between the white walls and green tiles, the Apeng River is jade-like green surrounding the foot of the green mountains, and the villagers in the courtyard dam take advantage of the warm winter sun to dry the farms. Authentic "delicious" dried radish.

Zhaizi Community is located in the east of Fengjia Street, at the center of the 5A tourist attraction of Zhuoshui Ancient Town and the 4A tourist attraction of Balahu. It is the core area of ​​Qianjiang to create the "One River and Two Banks" leisure agriculture and rural tourism belt of the Apeng River. 7.05 square kilometers, consisting of four villages, Yuanzhaizi, Xinsheng, Pengxi, and Guancun, among which the ancient village of Guancun has a history of more than 600 years.

The community has 873 households with 3544 people, mainly Tujia and Miao nationalities.

Xu Bo said, “In recent years, the Zhaizi community has continuously improved the mechanism for linking the interests of leading enterprises with the masses, and prioritized the use of local migrant workers through leading enterprises, large industrial households, and the construction of rural revitalization projects. This has boosted farmers’ income by more than 10 million yuan. All 222 people from 55 poor households were lifted out of poverty, which greatly improved the production and living conditions of poverty-stricken households."

The development of the industry needs talents as support. In terms of talent training, the Zhaizi community "builds nests and attracts the phoenix", attracting talented people from outside industries and returning entrepreneurs to invest and start businesses. 46 small and micro enterprises have been attracted to settle in the Guancun Innovation and Entrepreneurship Park.

In 2020, more than 1,000 people participated in training courses such as fruit and vegetable cultivation management, rural tourism, chefs, and rural construction craftsmen. A group of new-type professional farmers and leaders who understand agriculture, love the countryside, and be good at business have been trained, and the enthusiasm of the cadres and the masses has been stimulated.

In terms of cultural construction, the Zhaizi community combines its own characteristics to excavate and sort out the regional characteristic culture of “one river, two mountains, three ethnic groups, four gardens, five villages, six sceneries, seven cultures and eight treasures” and the culture of military troops in the official village. Municipal intangible cultural heritage.

"With the opening of the Zhaizi Bridge to traffic in January this year, it has not only solved the problem of difficult travel for the residents of the village for many years, but also promoted the development of rural tourism." A villager in the Zhaizi community told reporters that in the past, everyone traveled by boat and walking. The steel-rope bridge crossing the river, which is the “throwing bridge”, brings inconvenience to everyone's production and life, and also restricts the development of the local economy.

"At present, the Zhaizi community has invested more than 40 million yuan in the improvement of the rural human settlement environment. Prioritize the reconstruction of the poor households' environment, so that the image of the beautiful village in the Zhaizi community can be fully displayed and become a checkpoint for rural tourism." Xu Bo said. The rural tourism reception capacity of the family compound reaches more than 200 people. Farmers can build farmhouses, characteristic homestays, and create special agricultural products to achieve wealth and income.

In the process of organizational revitalization, the Zhaizi community has actively expanded the collective economy, promoted the "three changes" reform, and developed leisure tourism and sightseeing agriculture in accordance with local conditions. In 2020, the collective economic operating income will exceed 200,000 yuan, and the income of community residents will continue to increase. -Level health villages, municipal-level democratic rule-of-law demonstration villages, and municipal-level rural governance demonstration villages.

In January 2021, the Zhaizi Community of Fengjia Town, Qianjiang District has built a national 4A-level scenic spot in Guancun. The next step is to realize the integrated development of modern agriculture, intensive processing of agricultural products, and rural tourism; and continuously enhance the happiness and sense of acquisition of the community.

The reporter saw the traffic on the Zhaizi Bridge, the flower garden and the peach blossom stream in the village were pleasant, and a beautiful picture of "ecological beauty, industry prosperity, and people's prosperity" was slowly unfolding.