Dubai Chamber: The UAE is the largest exporter of copper wire in the world

A recent study by the Dubai Chamber of Commerce and Industry revealed that the UAE is the largest exporter of copper wires in the world, due to the pivotal global role it has achieved in the copper industry, especially as the global economy continues to face the effects associated with the outbreak of the new Corona virus pandemic (Coffee 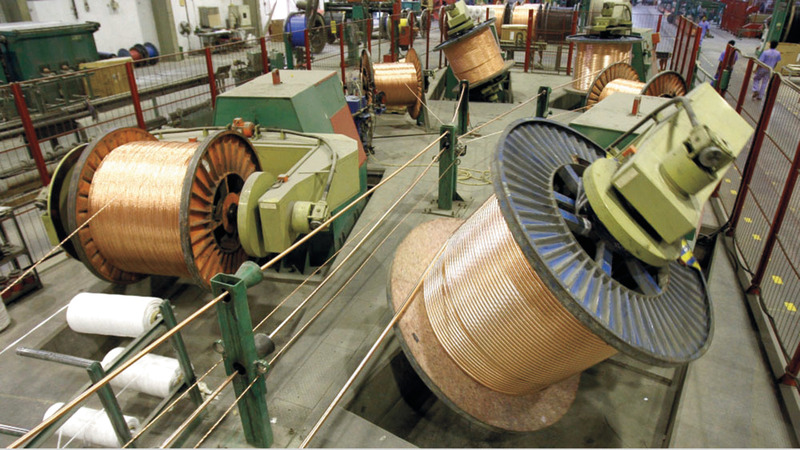 Dubai Chamber: The UAE is the largest exporter of copper wire in the world

A recent study by the Dubai Chamber of Commerce and Industry revealed that the UAE is the largest exporter of copper wires in the world, due to the pivotal global role it has achieved in the copper industry, especially with the global economy continuing to face the effects associated with the outbreak of the new Corona virus (Covid-19), which It caused double damage to copper during the first months of 2020, noting that the UAE's exports during 2019 recorded a value of more than $ 2.3 billion.

The study showed that the closure measures have reduced consumption in most parts of the world, and that mining production and refining activities have faced disruptions due to the pandemic.

The Dubai Chamber study stated that during the period from January to October 2020, copper prices witnessed large fluctuations that could be better understood if the 10-month period was divided into two short periods.

She explained that the shock phase of the first pandemic, between January and April 2020, led to a decline in prices by “-16%” to settle at $ 5058 per ton, noting that despite this, this decline was immediately followed by the “recovery phase” between April and October 2020. And continuing until now, as it witnessed a rise in prices by 33%, to reach 6714 dollars per ton.

The latest sector data released by the "International Copper Study Group" in October 2020 indicates that the production of copper mines in the world decreased by "-0.8%" during the period from January to July 2020 compared to the same period in 2019. This decline is mainly due to measures Closure in the world due to the pandemic, in addition to some operational and weather-related matters that affected some major mines.

The "Dubai Chamber" indicated in its study that despite the decrease in the production of mines, the production of pure copper in the world increased by 1% during the period under study, thanks to the increase in primary production (using electrolysis and electrical purification).

On the demand side, she explained, the numbers published by the "International Copper Study Group" show that with a growth rate of 0.3%, the apparent use of pure copper in the world remained unchanged during the period from January to July 2020 compared to the same period last year.

According to the group's data, it has been estimated that the use of pure copper in the world, with the exception of China, decreased by about 10%, as the spread of the pandemic affected the use of copper in Japan with a decline of (-15%), the European Union (-11%), and the states (-4.5%), while employment in Asia (excluding China) declined by (-13%).

In contrast, China's increased use of pure copper has offset declines in other regions of the world.

The study stated that the slight decrease in production and the stability of global demand led to a deficit in the global pure copper balance of 255 thousand tons during the period under study, noting that this shortage was a major reason for the noticeable rise in prices in recent months.

The study expects that the future growth in global demand for copper will come mainly from three sectors: electric cars, building and construction, and renewable energy.

She explained that with regard to electric cars, it is expected that the development of electric cars will drive the future demand for copper, as the metal is a major component used in electric motors, batteries, transformers, wires and charging stations.

In addition, the agency expects that the global inventory of electric vehicles will continue to expand steadily, exceeding 140 million units by 2030.

The Dubai Chamber study stated that the building and construction sector is one of the main sectors that will contribute to the growth of global demand for copper.

She explained that this sector is considered a traditional driver of copper demand, as it represents about 20% of total demand.

Analysts expect that the sector will preserve this role in the future, and that the global middle class will grow by 4% annually, to reach 5.6 billion people by 2030, which establishes a new demand for housing.

The study confirmed that copper is a highly efficient conductor of electricity and heat, noting that about 60% of the total demand for this metal revolves around these applications, as it is used intensively, especially in renewable energy systems, many of which use up to 12 times that of copper More than traditional systems, to ensure efficiency.

According to a study by the International Copper Association, the trend to generate solar and wind energy is expected to lead to a boom in global demand for copper by about 813 thousand tons annually by 2027.