Come on after get off work! Oil prices are approaching "five consecutive rises", and many places will return to the "6 yuan era" 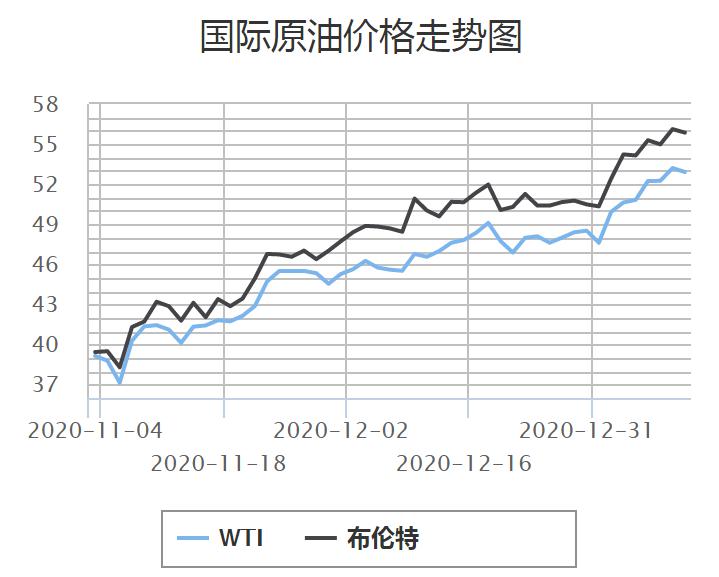 Sino-Singapore Jingwei Client, January 15 (Xiong Siyi) At 24:00 on the 15th, the first round of adjustment of domestic refined oil prices in 2021 will open.

Institutions generally predict that, accumulating adjustments at the end of 2020, domestic refined oil prices will face a "five consecutive rise", which is the first time since the current price adjustment mechanism was implemented in the spring of 2013.

Since this round of pricing cycle, international crude oil prices have fluctuated upward as a whole.

In the market, Saudi Arabia, the world's largest oil exporter, promised to reduce production by another 1 million barrels per day in February and March, and the decline in US crude oil inventories for five consecutive weeks supported oil prices.

However, the increase in global new crown cases has also triggered market concerns about fuel demand, which is a certain negative.

As the international oil price rises, the expectation of upward adjustments on the retail end of refined oil products is also expanding.

According to calculations by Zhuo Chuang Information, as of the close of January 13, the domestic reference crude oil change rate for the 9th working day was 3.24%, corresponding to an increase of 170 yuan per ton for gasoline and diesel, which is equivalent to 92# gasoline, an increase of 0.13 yuan, and 0# diesel. Increase by 0.14 yuan.

Sino-Singapore Jingwei Client noticed that domestic refined oil prices will undergo 25 rounds of adjustments in 2020, ending with a "four consecutive rises" at the end of the year.

If the first round of adjustments in 2021 welcomes a "good start", domestic refined oil prices will achieve "five consecutive increases."

Li Yan, an oil analyst at Longzhong Information, pointed out that this will be the first time that the current price adjustment mechanism has been implemented since the spring of 2013, and the domestic refined oil prices have completed the "five consecutive rises".

The previous "four consecutive rises" was the longest rise, which occurred in 2016 and 2018 respectively.

Many places will return to the "6 yuan era"

"At present, 92# gasoline in most areas in China is mostly concentrated at 5.84-5.95 yuan per price increase. After the increase is implemented, most areas will return to the '6 yuan era'," predicts Xu Na, a refined oil analyst at Zhuo Chuang Information, "according to the current increase According to the calculation, after the'five consecutive rises', domestic standard gasoline has risen by 815 yuan/ton, corresponding to 92# gasoline rising by 0.6 yuan/liter, 95# gasoline rising by 0.68 yuan/liter; standard diesel fuel has risen by 790 yuan/ton, corresponding to 0# Diesel rose by 0.67 yuan per liter, and consumers will spend 30 yuan more on filling a tank of fuel compared to two months ago."

However, Li Yan reminded private car owners that from the perspective of gas station retail, the preferential policies are still continuing.

"The retail price of gasoline at private gas stations is mostly 0.4-0.6 yuan/liter lower than that of main gas stations. During some site activities, the discount can reach 1.2-1.3 yuan/liter."

The next round of domestic oil price adjustment window (at 24:00 on January 29) is still expected to increase, which will support the domestic gasoline and diesel market to rise steadily.

Hu Xue, an analyst at Zhongyu Information, said that the future of crude oil may have ups and downs, but based on the current crude oil price level, it is predicted that the next round of refined oil retail will still have a narrow upward adjustment.