Al Tayer: Our goal is to place solar panels on all Dubai buildings by 2030

The Managing Director and CEO of Dubai Electricity and Water Authority, Saeed Mohammed Al Tayer, confirmed that the authority is working according to the vision of His Highness Sheikh Mohammed bin Rashid Al Maktoum, Vice President and Prime Minister of the UAE and Ruler of Dubai, to make the emirate of Dubai a global center for clean energy and green economy. 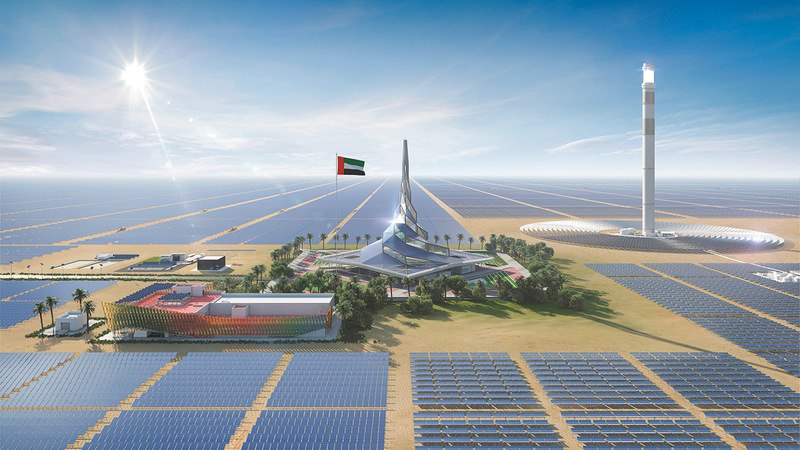 Al Tayer: Our goal is to place solar panels on all Dubai buildings by 2030

The Managing Director and CEO of Dubai Electricity and Water Authority, Saeed Mohammed Al Tayer, confirmed that the authority is working according to the vision of His Highness Sheikh Mohammed bin Rashid Al Maktoum, Vice President and Prime Minister of the UAE and Ruler of Dubai, to make the Emirate of Dubai a global center for clean energy and green economy.

He added to "Emirates Today" that the authority is working to increase reliance on clean and renewable energy, within the framework of the Dubai Clean Energy Strategy 2050 launched by His Highness to provide 75% of the total energy production capacity in Dubai from clean energy sources by 2050, indicating that Dubai's goal It is to place solar panels on all buildings in the emirate by 2030.

Al Tayer said that the “Mohammed bin Rashid Al Maktoum Solar Energy Complex” is the largest solar energy complex in one location in the world, according to the Independent Product System (IPP), and its production capacity will reach 5,000 megawatts by 2030, with total investments of 50 billion dirhams. Pointing out that the complex, upon completion, will contribute to reducing more than 6.5 million tons of carbon emissions annually.

Al-Tayer revealed that the hydroelectric power station with pumping and storage technology implemented by the authority in the Hatta region with a capacity of 250 megawatts is the first of its kind in the Arab Gulf region, with a storage capacity of 1500 megawatt hours, and a life span of up to 80 years.

He explained that the station relies on producing electricity on making use of the water stored in the Hatta Dam, and another upper dam being built in the mountainous region.

He continued: «Outside the peak consumption times, advanced turbines that rely on clean solar energy pump water from the lower dam to the upper dam, while these turbines are operated to produce electricity and supply the Authority’s grid when needed by taking advantage of the force of the rushing water sliding. From the upper dam to the lower dam, through a 1.2 km long canal, with high efficiency in the process of producing and storing electricity, with an immediate response to energy demand within 90 seconds.

On the "green hydrogen" project, Al Tayer said that it is the first of its kind in the Middle East and North Africa region, and it is being implemented in cooperation between the authority and the office of "Expo 2020 Dubai" and "German company Siemens", in the external testing facilities of the research and development center of the authority in The Mohammed bin Rashid Al Maktoum Solar Energy Complex, indicating that the hydrogen that will be produced will be stored and then used in energy production and transportation.

Al Tayer stated that, in addition to the major projects implemented by the authority to promote the transformation towards clean energy, it is working to involve Dubai's residents in the production of clean energy through the "Shams Dubai" initiative, which allows home and building owners to install photovoltaic panels to produce electricity from solar energy, and link it. With the electricity grid, pointing out that Dubai's goal is to place solar panels on all buildings in the emirate by 2030.

He stressed that "Shams Dubai" has achieved great success, at a time when the authority has so far completed connecting more than 6600 systems to the electricity grid in Dubai, with a total capacity of 259.6 megawatts.

Al Tayer emphasized that the UAE leads global efforts in the clean and renewable energy sector through its strategies and investments in this field.

He explained that the "Emirates Energy Strategy 2050" targets a mixture of renewable and clean energy sources, to ensure a balance between economic needs and environmental goals, revealing that the state will invest 600 billion dirhams until 2050, to ensure that energy demand is met and growth is sustainable in the country's economy.

Dubai is one of the leading cities in the development of the renewable and clean energy sector, and is a pioneer in creating modern methods and methods to enhance the efficiency of the energy sector, rationalize the consumption of natural resources, and find alternative solutions to traditional energy to support sustainable development in the emirate.

The "Dubai Clean Energy Strategy 2050", launched by His Highness Sheikh Mohammed bin Rashid Al Maktoum, aims to provide 75% of Dubai's energy production capacity from clean energy sources by 2050. Achieving the objectives of the strategy requires a production capacity of more than 42,000 megawatts of energy. Clean and renewable by 2050.

Al Tayer stressed that DEWA is keen to foresee and create the future of energy, by creating a future model for service institutions in the production, transmission and distribution of electricity and water.

He said, "We have investments of more than 86 billion dirhams over five years to meet the growing demand in the emirate."

Al Tayer stressed that DEWA adopts an integrated strategy to involve all members of society in efforts to protect the environment and preserve natural resources, pointing out that the rationalization programs it launches throughout the year include a package of innovative awareness initiatives and activities targeting all consumer sectors, with the aim of encouraging individuals Society to follow a sustainable lifestyle in consuming electricity and water.

He explained that the rationalization programs have achieved great success, at a time when the authority is keen to sustain this success by promoting the culture of rationalizing consumption to be a daily practice, indicating that the rationalization programs and initiatives launched by the authority between 2009 and 2019 include: the 'rationalization award' and the 'Our House' initiative Ideally, "Green Week", "Earth Hour" and the "Let's Make This Summer Green" campaign have achieved cumulative savings within the targeted groups of residential, commercial and industrial sectors, reaching 2.2 terawatt hours of electricity and 7.8 billion gallons of water. Equivalent to saving one billion and 300 million dirhams.

The water savings are the equivalent of filling 14,000 Olympic swimming pools with water.

9% of the percentage of clean energy in Dubai

The Managing Director and CEO of Dubai Electricity and Water Authority, Saeed Mohammed Al Tayer, confirmed that Dubai has achieved great success, represented by surpassing the percentage set in the "Dubai Clean Energy Strategy 2050", as the percentage of clean energy in Dubai is currently about 9% of the energy mix, while The target was to save 7% by 2020.

The capacity of the solar energy projects that were operated in the "Mohammed bin Rashid Al Maktoum Solar Energy Complex" is 1013 megawatts with photovoltaic solar panels, and the authority has projects with a capacity of 1850 megawatts "in progress" with the techniques of photovoltaic panels and concentrated solar energy, in addition to other stages to reach 5000 Megawatts by 2030.

The efforts of the institutions in Dubai support the goals of the Dubai Strategy to Reduce Carbon Emissions, which achieved great success during the year 2019, as more than 14 million tons of emissions were reduced, equivalent to 22%.

The results achieved exceeded the targets set in the strategy to reduce emissions by 16% by 2021.

The managing director and CEO of Dubai Electricity and Water Authority, Saeed Mohammed Al Tayer, said that renewable energy is one of the most important enablers of sustainability at all levels.

He stressed that the authority has set long-term priorities, represented by: "environmental priorities", as the complex will contribute to enhancing the efficiency of the use of natural resources and reducing the environmental footprint.

He explained that the complex affirms within its "social priorities" the authority's commitment to the highest standards of governance, work ethics, social responsibility, and providing job opportunities for citizens and residents, while "economic priorities" emphasized that the complex has a role in improving cost and revenue efficiency, attracting investments, and supporting sustainable economic growth in Dubai, supply chain diversification.

The managing director and CEO of Dubai Electricity and Water Authority, Saeed Mohammed Al Tayer, confirmed that Dubai has an integrated vision to ensure energy security and sustainability, which includes three main axes.

He added, "The first axis is to produce more clean energy, especially solar energy, and one of our most prominent projects to achieve this goal is the Mohammed bin Rashid Al Maktoum Solar Complex."

He pointed out that the second axis is to separate the desalination process from the production of electricity, and the desalination of water using solar energy, as the authority aims to produce 100% of desalinated water by 2030 using a mixture of clean energy sources and waste heat.

He explained that the third axis is to reformulate the role of service institutions and digitize them, by adopting the techniques of the fourth industrial revolution and disruptive technologies, such as artificial intelligence, robotic aircraft, energy storage technologies, "blockchain", and the Internet of things.