Drinking milk tea, eating takeaways, visiting the supermarket, it’s hard to see them in the future

Chinanews client, Beijing, January 7th (Zuo Yukun) At the beginning of the new year, while bidding farewell to the past year, we also have to bid farewell to an "old friend" that is common in life.   Plastic straws readily available in milk tea shops, plastic bags that can be bought for a few cents in supermarkets, and three-layer plastic packaging inside and outside three layers in the takeawa 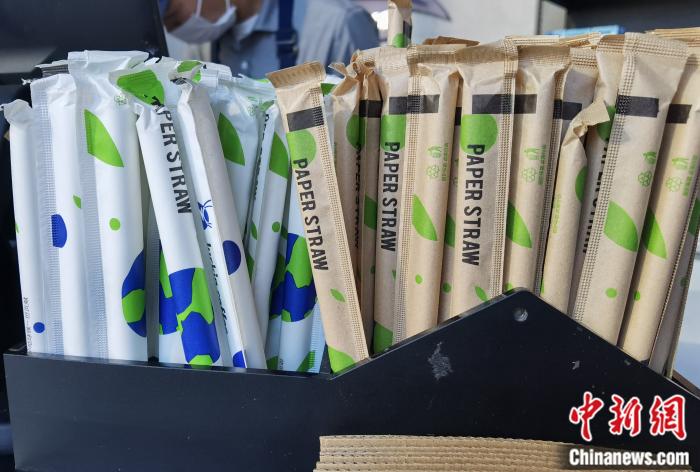 Chinanews client, Beijing, January 7th (Zuo Yukun) At the beginning of the new year, while bidding farewell to the past year, we also have to bid farewell to an "old friend" that is common in life.

Plastic straws readily available in milk tea shops, plastic bags that can be bought for a few cents in supermarkets, and three-layer plastic packaging inside and outside three layers in the takeaway... These plastic use scenes that can be seen everywhere in daily life may all follow The landing of the "upgraded plastic limit order" has changed.

Paper straws in a drink shop.

"This is the darkest era in the history of milk tea." Miss Yan, who loves milk tea, said with emotion: "There is no plastic straw, and the joy of biting the straw is gone. I can only comfort myself that this is a contribution to environmental protection."

During the New Year’s Day holiday that just ended, if you go shopping and drink milk tea, you will definitely find that the straws in the street and alley milk tea shops have also been "renewed for the New Year."

In January 2020, the National Development and Reform Commission and the Ministry of Ecology and Environment issued the "Opinions on Further Strengthening the Treatment of Plastic Pollution", clarifying that by the end of 2020, non-degradable disposable plastic straws will be prohibited in the catering industry nationwide.

In August 2020, the General Office of the Ministry of Commerce issued a notice on further strengthening the management of plastic pollution in the business sector, and announced the phased tasks of banning and restricting plastics. It requires that by the end of 2020, shopping malls in municipalities, provincial capitals, and cities under separate planning Non-degradable plastic bags are forbidden to be used in supermarkets, catering and takeaway services and various exhibition activities.

The phased tasks of banning and limiting plastics announced by the Ministry of Commerce.

According to CCTV Finance and Economics, the cumulative output of plastic products nationwide in 2019 was 81.84 million tons, of which nearly 30,000 tons of plastic straws, or 46 billion, were used per capita over 30.

Industry experts say that the use time of plastic straws is only a few minutes, but the degradation time may be as long as 500 years.

On the counter of a Luckin Coffee in Chaoyang District, Beijing, straws packed in two colors are now placed.

According to the clerk, the two are just different in thickness, the material is the same, and both are paper.

According to visits and observations conducted by Chinanews.com, the straws of beverage brands such as Starbucks, Michelle Ice City, Tea Baidao, and Gu Ming have chosen this paper substitute.

A straw from a Coco milk tea shop in Beijing.

“This is the previous inventory. Many customers don’t like paper straws and want plastic. They just put them out and they won’t be able to get in after they are used up.” A Coco clerk introduced to Chinanews. They currently have two new straws, one One is PLA (polylactic acid) degradable material, but because it will soften immediately in hot drinks, it is only used in cold drinks; the other is a paper straw with a wider application range.

From straws to more

According to the clerk of the Coco milk tea shop, in addition to straws, there are many changes brought about by the "new plastic restriction order". For example, the sealed plastic film has also become a paper film.

In the tea shop of another milk tea brand Nayuki, not only the straws became paper, but the inner bag packaging of the bread also changed from the previous plastic bag to a biodegradable bag.

According to the clerk, the bag was changed just a few days before New Year's Day. Compared with the traditional plastic bag, the packaging of this material is very light, thin and soft, and the bearing capacity is weak, but it is also sufficient as an inner packaging.

In addition to new tea brands, many of the "old faces" we are familiar with in catering are also "new".

In July 2020, McDonald’s China started from nearly a thousand restaurants in Beijing, Shanghai, Guangzhou, Shenzhen and other cities, gradually phasing out plastic straws, and the new beverage packaging has an additional drinking port on the lid, which uses direct drinking; KFC is Since January 2021, more than 6,900 restaurants across the country have completely stopped using plastic straws and switched to paper models.

The new packaging of the McDonald's Coke Cup.

Except for straws, other plastic links can't be let go.

For example, starting from January 2021, more than 6,300 KFC restaurants will replace disposable plastic tableware with wooden tableware for dine-in and take-out; more than 3,800 KFC take-out and take-out plastic bags will be replaced with paper bags or biodegradable plastics. bag.

The takeaway Xiao Shao has recently noticed that in the meals he has taken, there are more paper bags: "Like the food without soup, it can be said that paper bags are basically used; there are some soups, such as spicy and spicy. For hot things, the paper bag really doesn’t hold up, and plastic bags are inseparable."

A clerk from a Yonghe King in Haidian District, Beijing, told Chinanews.com that because they have a lot of liquid products, two methods are mainly used to prevent leakage under the "new plastic restriction order": one is to replace drinks such as soy milk with Two-layer sealing lid packaging, the second is to change the outer layer of plastic bag into a degradable plastic bag.

On the wall of the checkout area, shopping bags have also been upgraded to biodegradable shopping bags, and the price has also increased to RMB 1 for a large bag and RMB 0.6 for a middle bag.

According to Hema, disposable straws and tableware used in stores have also been replaced with biodegradable materials or recyclable materials.

According to Xiao Shao, a food delivery worker, in general, some well-known chain catering brands are able to implement the "new plastic restriction order", but in some individual stores, farmers' markets, roadside vendors, etc., The use of non-degradable plastic products is still everywhere.

A visit by Chinanews found that price is the most important factor affecting the promotion of degradable plastic products.

The delivery staff carrying the paper packaging to deliver the food.

At present, after shopping bags are replaced, consumers bear the higher prices.

However, if the free roll-up bags in the fresh food area are also replaced uniformly, the supermarket will have to spend more than 100,000 yuan each month.

"Plastic bags are now free. We operate on a small scale and don't give them a certain impact on our business." A farmer's market operator in Beijing also said that sometimes when someone checks it, they will symbolically charge an extra dime.

If the price of the bag is expensive, the low profits will be further compressed.

In addition to the price issue, there are also unsatisfactory feelings about the use of alternatives.

"Support to ban plastic straws, but there must be good alternative products, the experience of using paper straws is too bad." Many consumers said.

In addition to the strange smells such as "paper tube smell, glue smell, nail polish smell", some paper straws are easy to melt when exposed to water and become soft when exposed to heat, which greatly reduces the experience of drinking milk tea.

"I haven't quit milk tea for so many years. The paper straw made me successful." Some netizens lamented.

Screenshot from the Internet.

Not only consumers, but also a lot of clerk in the milk tea shop.

For example, because paper straws are not as hard as plastic, many customers report that the sealing film cannot be pierced; and the paper film is not strong enough to match the paper straws. Often customers and takeaway boys’ milk tea is rotten in the bag or On the way.

"In addition to the high cost of biodegradable plastic bags, because the technology is not yet mature, it is very easy to tear, which makes many foods unable to use such plastic bags." Lai Yang, a member of the Expert Committee of the China Federation of Commerce, also said.

But in any case, plastic pollution to the environment has long been a global problem, and "plastic limit" is an inevitable trend.

How to develop alternatives that are in compliance with the policies and regulations, but also at a moderate cost and convenient to use, requires more efforts from industry and enterprises.

Some people in the industry believe that the market for degradable plastics in my country is huge. With the improvement of biodegradable plastics technology, the cost problem can be easily solved after large-scale production is realized.

Are you ready for the days with biodegradable products?