Imports of this kind of stuff will be banned immediately! Customs represses smuggling →   A few days ago, the Ministry of Ecology and Environment and other departments issued an announcement stating that from January 1 next year, the import of solid waste in any way will be prohibited. Solid waste refers to solid and semi-solid wastes produced in production, consumption, life and other activities 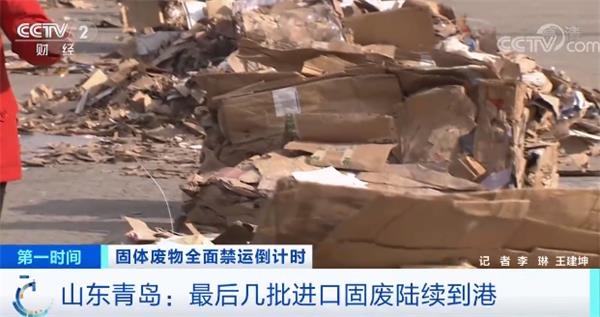 Imports of this kind of stuff will be banned immediately!

A few days ago, the Ministry of Ecology and Environment and other departments issued an announcement stating that from January 1 next year, the import of solid waste in any way will be prohibited.

Solid waste refers to solid and semi-solid wastes produced in production, consumption, life and other activities.

For a long time, my country has been the world's largest garbage importer. Now it has been a few days before the total ban on solid waste imports. How is this work progressing?

The waste paper at the solid waste inspection site at Huangdao Port in Qingdao, Shandong is part of the final batch of solid waste entering the country.

Waste corrugated paper from the United States, mixed with a small amount of plastic and sponge.

The waste paper has been fumigated and disinfected after disembarking. There is no pungent smell, and it smells like used old courier boxes.

From January 1 next year, my country will ban the import of these solid wastes.

In fact, as early as 2017, the State Council issued the "Implementation Plan for Prohibiting the Entry of Foreign Garbage to Promote the Reform of the Solid Waste Import Management System", requiring a total ban on the entry of "foreign garbage".

For more than three years, with the advancement of solid waste reform, enterprises are also preparing for transformation.

Luo Shuhong, Deputy Director of the

Waste plastics were the first batch to be banned from entering the country. Later, the import of waste fibers and waste hardware was gradually banned.

Liu Jianghai, director of the

We mainly use domestic waste paper and some imported recycled pulp to fill the gap.

Industry experts said that the

, but the threat to biosafety and the harm to the environment cannot be ignored.

In spite of strict legal prohibitions and strong rectifications by relevant departments, "foreign garbage" still occurs from time to time.

In the face of huge interest temptation, some lawbreakers even take risks and knowingly commit crimes, smuggling "foreign garbage" into the country.

He Danhao, deputy head of the station supervision section of

reminded that the weight of this truck reached 35.78 tons, which far exceeded its own approved weight of 16.10 tons. There is a great suspicion of carrying goods in the box. .

The customs immediately carried out an unpacking inspection and

that should have been empty was actually piled up with bundled waste clothes, with a total weight of 19.68 tons

He Danhao, deputy head of the station supervision section of Beilun Customs Lingang Office under Ningbo Customs: It is

full of a large number of goods that have been bundled and wrapped in waste paper boxes, and

there are many dirty and damaged fabrics in the gaps between the cartons. There was a peculiar smell.

It is understood that

"empty containers are not empty" itself is a

A few days ago, a company in Tianjin declared to Tianjin Xingang Customs that it imported 1 shipment of polyoxymethylene plastic particles from Thailand, a total of 3 containers. After the goods arrived at the port, it was found that the shipment contained white flocs, colored plastic head materials, white irregular sheet and the connecting member,

, and other single box trade false

to the customs declaration.

Wang Wei, Director of the Second Anti-smuggling Division of the Anti-Smuggling Bureau of the

"Foreign garbage" smuggling methods are constantly being renovated, and most of them try to get through the customs by illegally reporting the name of the product, which is highly concealed and harmful to the society.

In the next step, the Customs will work with all relevant departments to investigate cases where they are found, and fight against them.