"He has not survived this Christmas!" 39-year-old with a net worth of 6.8 billion, died of poison?

Chinanews client, Beijing, December 26 (Reporter Wu Tao) "He hasn't survived this Christmas." On the 26th, the door of Shanghai Youzu Building Company was filled with white bouquets presented by staff and fans to commemorate Lin Qi.   On the 25th, Lynch, chairman of Youzu Networks, passed away at the age of 39, which aroused high social concern. In addition to Lynch's prestige in the industry, 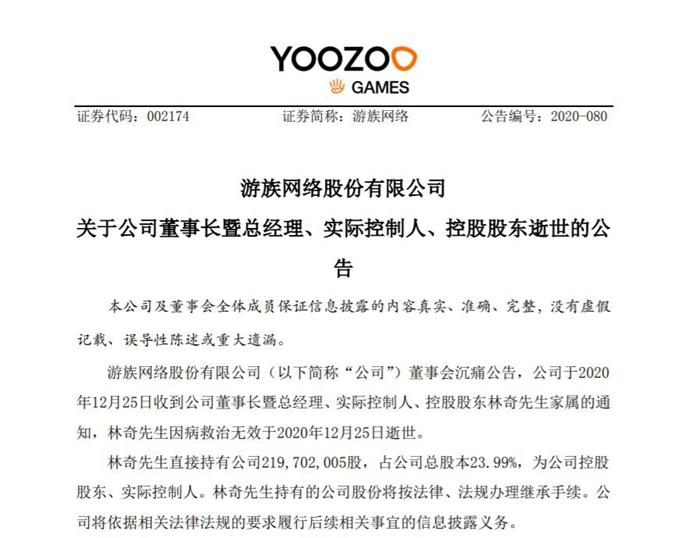 Chinanews client, Beijing, December 26 (Reporter Wu Tao) "He hasn't survived this Christmas." On the 26th, the door of Shanghai Youzu Building Company was filled with white bouquets presented by staff and fans to commemorate Lin Qi.

On the 25th, Lynch, chairman of Youzu Networks, passed away at the age of 39, which aroused high social concern.

In addition to Lynch's prestige in the industry, this is also related to the cause of his death.

Earlier, it was reported that Lynch was poisoned due to company infighting.

According to an announcement by Youzu.com, Lynch passed away on December 25, 2020 due to ineffective treatment. He did not disclose the specific "disease".

The cause of Lynch's death is complicated and confusing, and Youzu.com has also been questioned about information disclosure problems.

Lynch and his wanderers

In 2014, he led Youzu.com to go public and became an A-share listed company.

According to the official website of Youzu Network, it has many games such as "League of Goddess 2", "Thirty-Six Strategies", "Tomb Notes" and "Juvenile Three Kingdoms".

Its financial report shows that Youzu's net profit in the first three quarters of 2020 is 560 million yuan.

According to the company's investigation, Lynch holds 23.99% of the shares of Youzu Network and is the company's chairman, general manager and actual controller.

The Hurun Rich List shows that in 2020, Lin Qi's net worth has reached 6.8 billion yuan.

After Lynch's death, the official account of Youzu Network released "Goodbye to the Youth": You, see through what is not good and still believe in goodness, and see what is not good but still be kind.

After Lynch's death, the official Youzu posted a message.

In Lynch's business map, perhaps everyone is more familiar with "Three Body".

Public information shows that Lynch serves as a director in the Three Body Universe (Shanghai) Cultural Development Co., Ltd. under his control.

The company is the global copyright owner of "Three Body".

The news of Lynch’s hospitalization dates back to December 18, when media reports said that Lynch had been hospitalized due to poisoning.

However, Youzu Network responded on the Shenzhen Stock Exchange's investor interactive platform that recent rumors about Lynch's physical condition were not true.

On December 23, a screenshot of a WeChat group chat was swiped into the circle of friends: "Youzu Chairman Lin Qi was poisoned and has been sent to the hospital ICU."

Subsequently, an executive of Youzu Network responded to the rumors of infighting poisoning in the circle of friends, saying: "No infighting, everyone is there."

When some media asked Youzu's network about the situation, its staff said: "Rumors, a lawyer's letter has been arranged."

At 19:16 on December 23, the Shanghai police notified that the patient Lin (male, 39 years old) was suspected of being poisoned during the diagnosis and treatment of a hospital.

It was discovered that Lin's colleague Xu (male, 39 years old) was suspected of committing a major crime.

The police reported on the 23rd.

At 20:30 on the 23rd, the official Weibo "Youzu Jun" of Youzu Network stated that Lynch developed acute symptoms on the way home on the evening of December 16 and rushed to the hospital by himself.

Lynch is currently in hospital to resume treatment and all signs are stable.

On the same day, as a listed company, Youzu Network announced that it had recently received a notice from the family of Chairman and General Manager Lynch that Lynch was admitted to the hospital due to unwellness. After treatment, his current physical condition is stable and continues to improve.

However, some netizens commented on the above-mentioned Weibo statement that "things happened suddenly in the past week": This seems to be an informed play.

Just one day later, on the 25th, Lynch died.

Facts have proved that Lynch's condition is not "continuously improving" as you said.

Or affected by the above news, the stock price of Youzu Networks has been on the decline in recent trading days.

It is worth noting that on December 17, the trading volume of Youzu's network soared to 571 million yuan, much higher than the 120 million yuan the day before.

According to Youzujun's Weibo, Lynch happened to go to the hospital with acute symptoms on the evening of December 16.

The next day (December 17) the stock turnover skyrocketed. What a coincidence?

In this regard, some netizens questioned: Youzu knew about it a long time ago and will not disclose it.

In addition to the company's untimely disclosure of information and questioned, the cause of Lynch's death is still confusing.

According to the police report, Xu, who is suspected of committing a major crime, has been criminally detained by the police in accordance with the law, and related investigations are being further carried out.

According to the company's investigation, there are two executives surnamed Xu in the companies associated with Lynch, one is Xu Bin, the secretary of the board and deputy general manager of Youzu Networks, and the other is Cultural Development of Sansei Universe (Shanghai) Limited director Xu Yao.

The actual controllers of the above two companies are Lynch.

According to a statement released on Weibo by Youxiajun on the 23rd, the suspect Xu worked in a film and television company invested by someone, and all the executives and core employees of the listed company Youzu Network are on duty, and the company is operating normally.

Therefore, many people suspected that the suspects of major crimes reported by the police were Xu Yao, who served as the director of Three Body Universe (Shanghai) Cultural Development Co., Ltd.

According to the company's investigation, Santi Universe (Shanghai) Cultural Development Co., Ltd. was established in 2018, the legal representative is Lin Qi, and the registered capital is 21.052632 million yuan.

Xu Yao's shares in it were not disclosed.

Regarding the media reports on "Linqi Poisoning", the reporter combed and revealed that there were media reports that Lynch was poisoned because he had drunk aged Pu'er sent by others, and the poison was purchased by the suspect from abroad.

There are also media reports that Lynch is pufferfish poison.

According to other media reports, Lynch has been poisoned with chronic poison for a long time. The perpetrator of the poison was extremely vicious. A variety of poisons were found in Lynch's body.

Lynch has only weak vital signs in the last few days.

However, none of these news has been effectively confirmed at present, and we can only wait for relevant agencies to publish authoritative information in the future.