China-Singapore Jingwei Client, December 12 (Dong Xiangyi) The National Bureau of Statistics announced on the 11th the Consumer Price Index (CPI) of 31 provinces in November 2020. The data shows that the CPI of 22 provinces recorded negative growth in November compared with the same period last year. Hainan was the province with the largest decline, with a decline of 1.9%. Only 8 provinces saw a 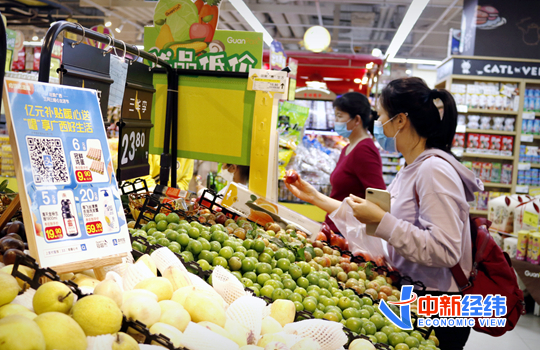 China-Singapore Jingwei Client, December 12 (Dong Xiangyi) The National Bureau of Statistics announced on the 11th the Consumer Price Index (CPI) of 31 provinces in November 2020. The data shows that the CPI of 22 provinces recorded negative growth in November compared with the same period last year. Hainan was the province with the largest decline, with a decline of 1.9%.

Only 8 provinces saw a year-on-year increase in CPI, and Tibet led the country with a 0.9% increase.

According to data released by the National Bureau of Statistics a few days ago, the national CPI fell 0.5% year-on-year in November, a negative growth after 11 years.

Prices in various places have also plummeted. 22 provinces, including Hainan, Hubei, Hunan, Shandong, and Hebei, recorded negative growth in CPI year-on-year in November. Among them, Hainan's CPI fell by 1.9% year-on-year, which was the largest decline in the country.

The CPI increase data of 17 provinces exceeded the national level. Among them, Tibet, Qinghai, Yunnan, Gansu, Beijing, Xinjiang, Shanxi, and Zhejiang had positive CPI growth. Tibet's CPI ranked first in the country with a 0.9% increase.

The increase in CPI in Guangxi and Heilongjiang provinces was the same as that of the whole country, both -0.5%.

In addition, Jiangxi, Shaanxi, Shanghai, and Inner Mongolia are -0.1%, Jiangsu, Henan, and Tianjin are -0.4%, slightly higher than the national level, and Ningxia's CPI growth rate is 0.

Even though the CPI of some provinces has risen year-on-year, the data is still the lowest point during the year.

Take Beijing as an example. In November, Beijing’s CPI rose 0.2% year-on-year, reaching its lowest point in the year.

In November, the national CPI fell by 0.5% year-on-year. Among them, the price of food changed from a 2.2% increase in the previous month to a drop of 2.0%, which was the main reason for the increase in the CPI.

The downturn of the pig cycle is the main factor that drags down the CPI to turn negative.

How to treat future price trends?

Will prices fall again before the end of the year?

"It is expected that the CPI will continue to fall in December, but as the end of the year comes, the demand side will gradually recover, and the CPI decline will be limited." Soochow Securities Li Yong team analyzed that since November, the CPI has changed from rising to falling due to the supply side.

The production of important livelihood products such as pork, eggs, chicken, and duck meat has continued to recover, and the demand side has recovered slowly.

Under the mismatch of supply and demand, the price decline has further expanded; in terms of non-food items, the off-season of tourism is coming, and the prices of air tickets, tourism and hotel accommodation may fall further.

CPI has entered a "negative era", is there a risk of deflation in the Chinese economy?

It is worth mentioning that the National Bureau of Statistics also emphasized in its data interpretation that “the core CPI after deducting food and energy prices continues to remain stable, with a year-on-year increase of 0.5%, and the increase has been the same for 5 consecutive months.” This means that deductions The price data of pork prices and other indicators that affect the increase in CPI remain stable.

CITIC Securities believes that the CPI may still face deflationary pressure in the short term, and the real relief may not be until the second quarter of next year.

"In the future, the core CPI and non-food CPI will continue to behave as in November, reflecting the continued upward trend of fundamentals. Even if the overall inflation level is low, but its impact on monetary policy, we believe that the logic behind the lower inflation It is basically consistent with the increase in inflation in 2019, that is, due to the impact of food supply, not weak demand, the possibility of monetary policy adjustments to this is low."

Wang Qing, chief macro analyst at Oriental Golden City, said that CPI deflation is expected to continue into the first quarter of next year. However, as the economic recovery drives up consumer demand and changes in the price base, it is expected that CPI will return to positive year-on-year growth after the first quarter of next year, and the economy will continue. The risk of entering deflation is small.