Chinanews client, Beijing, December 9th (Reporter Xie Yiguan) The prices of pork and other foods have fallen. In the past four months, prices have now "quadruple jump"! According to data released by the National Bureau of Statistics on the 9th, in November, the national consumer price (CPI) fell by 0.5% year-on-year, and again became negative after 11 years. CPI ups and downs chart. From the N 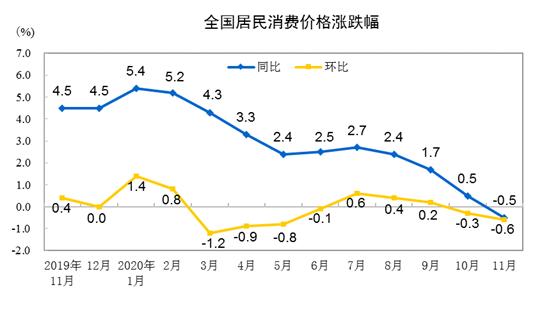 Chinanews client, Beijing, December 9th (Reporter Xie Yiguan) The prices of pork and other foods have fallen. In the past four months, prices have now "quadruple jump"!

According to data released by the National Bureau of Statistics on the 9th, in November, the national consumer price (CPI) fell by 0.5% year-on-year, and again became negative after 11 years.

Judging from the CPI rise and fall trend chart, this year's CPI showed a downward trend in shocks.

It is worth mentioning that the last year-on-year decline in CPI occurred in October 2009.

In October 2020, the CPI rose 0.5% year-on-year, and it remained in a positive range. Why did the CPI change from a year-on-year rise to a fall in November?

"Affected by the high comparison base in the same period last year, CPI fell by 0.5%. Among them, food prices changed from a 2.2% increase last month to a drop of 2.0%, which affected the CPI drop by about 0.44 percentage points, which was the main reason for the CPI to change from rising to falling. "Dong Lijuan, a senior statistician in the City Department of the National Bureau of Statistics, said that in addition, non-food prices have changed from flat last month to a decline of 0.1%, affecting the CPI drop by about 0.06 percentage points.

Pork, duck, chicken are all falling

"The core CPI, excluding food and energy prices, continued to remain stable, rising 0.5% year-on-year, the same rate of increase for 5 consecutive months. According to estimates, in November’s 0.5% year-on-year decline, the carryover impact of last year’s price changes was about zero. The impact of the new price increase is about -0.5%." Dong Lijuan pointed out.

"Second Brother" is the main attacker

Once the price of pork soared and became the driving force behind the increase in CPI, now the price of pork has fallen sharply, and the "Second Brother" has become a "heavyweight player" who made the CPI change from a year-on-year rise to a fall.

"In November, with the continuous promotion of the'six stability and six guarantees' work in various regions and departments, the prices of important livelihood commodities such as pork continued to fall." Dong Lijuan said that the price of pork fell by 6.5% month-on-month, but the decline narrowed by 0.5% .

According to the monitoring of the National Agricultural Products Wholesale Market Price Information System of the Ministry of Agriculture and Rural Affairs, in November 2020, the average wholesale price of pork (white strips) was 39.43 yuan/kg, down 7.2% month-on-month and 16.3% year-on-year.

Recently, reporters have observed in many supermarkets and vegetable markets in Beijing that compared with the end of October, most of the prices of pork for different parts have dropped slightly, and most of the meat fillings are below 20 yuan per catty.

How long will the downward trend of CPI last?

However, pork consumption is ushering in the peak season, and into late November, pork prices have increased on a week-on-week basis.

Recently, “pork prices rebounded” even made it into hot searches.

According to data from the Ministry of Agriculture and Rural Affairs, from November 27 to December 4, the price of pork was 40.29 yuan per kilogram, up 2.3% month-on-month and down 5.1% year-on-year.

"Pork prices rebounded during the peak season, on the one hand because farmers strictly controlled the amount of pigs for slaughter, and the increase in pork into the market was limited; on the other hand, the rain and snow weather affected the transportation of pigs." Minsheng Securities chief macro analyst Xie Yunliang said that the future of pork prices There is still room for upside.

According to media reports, recently imported frozen meat problems have frequently occurred. After the implementation of the pig embargo policy in the six central and southern provinces, the tight supply of pigs in the south has further intensified, which is also an important reason for the short-term increase in pork prices.

In the face of pork prices stopping falling and turning up, many people are concerned about whether pork prices will soar again and drive the CPI from negative to positive?

"The CPI will stay low for a period of time, but the negative growth will not last longer than the previous round." Liu Xuezhi, a senior researcher at the Bank of Communications Financial Research Center, told a reporter from China News. "The last round of negative CPI growth was in 2009 and lasted for 9 months. It is expected that this round of negative CPI will not exceed the first half of next year, because the pork price decline cycle may gradually end after the second quarter of next year."

On November 26, the central bank released China’s Monetary Policy Implementation Report for the third quarter of 2020, pointing out that price increases generally continue to decline, and there is no basis for long-term inflation or deflation. It is initially estimated that the average annual CPI increase will be within a reasonable range.